I’ve successfully ordered online several times and not gotten sick. But we went in person to eat yesterday and when I told the waiter that the gluten allergy menu online said this one dish was okay (I’d gotten it from ordering online before), he said “okay, I’ll change the rice from brown to white” which concerned me because there wasn’t a need to do that. But then the guy subbed out everything he felt like. I’ve gotten the dish before, but he subbed out/removed so much that when I got it, it was just a cup of rice, some spinach leaves, and a piece of avocado. I read his notes on the receipt and rather than saying “gluten free” he wrote “no sauce, sub white rice, no seaweed, no edamame, no lime, no tuna”. The waitstaff obviously just aren’t trained on gluten and that’s fine, I mean I didn’t get sick. But I also paid $20 for rice with spinach leaves.

Got very sick here. They didn’t substitute any of the sauces correctly and was sick for days. Will not return.

Came here for half priced appetizers and everything was amazing! Great portion sizes and even greater prices. Had the summer vegetable roll, chicken satay, and lettuce wraps. The gluten free menu is huge. Great place to satisfy your asian food craving. Will be back soon! 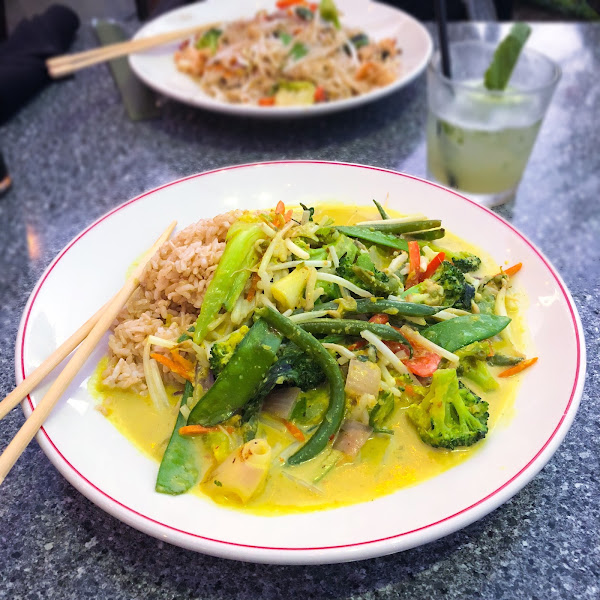 Got sick. Also - server tried to give me my colleague’s non gf meal. If they had protocols they were not following them. Really tired of restaurants telling me how great they are at serving Celiacs and then dropping the ball.

I LOVE Big Bowl. They are fantastic with allergies. I have Celiac and a dairy allergy and they have a clear protocol. Food is prepped in a GF pan, pink slip is filled out and a manager runs the food out separately to the table. All allergy/GF meals come on a red rimmed plate so that the kitchen and you know it’s an allergy/GF meal. I’ve eaten here so many times and have never gotten sick. The veggie spring rolls are a must! Also, the chicken lettuce wraps are AMAZING! You need to try this place if you like asian cuisine.

They have a gluten free menu. The food is pretty good and I haven’t gotten sick yet!

they have gluten free cake ! Have not tried it yet but looks good . I love this place and the clear gluten free menu!

No doubt, an excellent meal! Our servers were very knowledgeable, and friendly. It was great to see a well produced menu, and excellently prepared and presented food.

I was so excited to try this place because of its large selection of gf entrees. I ordered some sort of chicken dish. It tasted great. HOWEVER, I got terribly ill afterwards and was in immense pain all night! The waiter came across as not understanding the importance of no cross contamination action, even though I very clearly explained it to him. I was so disappointed! Never want to experience that type of intense pain. Thumbs down for this joint.

Large Gluten Free menu with many Chinese and Thai entrees that are normally hard to get as GF. I had Pad Thai with shrimp which was perfectly seasoned and cooked. GF soy and chili sauces at table that you can add yourself. This is a Lettuce Entertain You restaurant and they take great care ensuring safe GF preparation. Top quality food with safe GF practices makes this a great dining destination.

I was pretty impressed with Big bowl. I have several food allergies and they were great about working around all of them. They have an entire gluten free menu which makes ordering a breeze. They wait staff is well informed about the ingredients which was a breath of fresh air. I had the orange chicken and fried rice-which was delicious! They also have GF soy sauce.

Very helpful staff. When my meal was delivered they said the Gluten Free Thai Chicken. I knew then that they were extra careful.

Just okay. Wasn't thrilled with my food. It wasn't *bad* per say, just wasn't anything to write home about. I don't plan on going back really. I much prefer PF Changs!

We stopped there because the app said there was gf menu and the reviews were good. We were in town for the GF expo.

We ordered the GF lettuce wraps because the server said that was possible even though it was not on the gf menu. My friend ordered the gf pad Thai. everything tasted really good! we were glad we stopped.

on the way home on our hour + drive, we both started to get sick :( not sure if it was due to ordering something not on the gf menu.

Good gluten free menu. The waitress right away asked if I understood the menu or had any other allergies. It is even safe to create your own bowl here - She wrote "Gluten allergy" all over my order ticket. Yum!

I ate in the Schaumburg location. I have eaten here before many times. This time I got glutenised I had to go to the hospital. It was bad, I ordered chicken pad Thai.

I eat here every 6 weeks or so and have never had issues. I usually get orange chicken and fried rice. I order online and they thoroughly tag and identify the Oder with colored labels to signify GF.

I really enjoyed this restaurant. They had a gluten-free menu with a lot of options. I got stirfry with salmon garlic and ginger sauce and cauliflower rice. There were lots of vegetables and it was flavorful. Great atmosphere …,my family enjoyed their meals as well… I did not get sick and it felt very safe. It’s also located in a cool part of the city down by the park … the Art Institute of Chicago etc. enjoy!