I have ordered GF pizza from Bin14 a few times previously without issue, as had another friend with celiac too. However, I don’t know if they have new staff or changed ingredients/protocols or what, but this time my pizza was definitely cross-contaminated. This was my go-to place for pizza in Hoboken, but I don’t think I’d feel comfortable ordering a pizza from them again, at least not without physically going to the restaurant and asking them questions about their cooking process.

Their fried chicken and calamari are supposedly both gluten free and have a dedicated fryer, but I haven’t tried either one and can’t speak to their safety.

Tried takeout from here a few weeks ago. Was told that several appetizers are naturally gluten free and the steak frites could be easily adapted if they hold the demi glace. Got home, too a few bites and found demi glace on the steak and fries. Also then tested all 3 dishes that were allegedly gf with Nima and all tested positive (including the calamari prepared in a ‘dedicated fryer’. Not celiac friendly

I have celiac and have eaten here several times. Hard to know exactly when I have been glutened, but I consider this one of the only safe spots in Hoboken. The issue is that they make regular pizza- anyone with celiac knows a pizza place cannot be trusted since flour stays in the air for hours and can land on GF food in the kitchen. I don’t trust their GF pizza for this reason, but I play my odds hoping other food is far enough away. 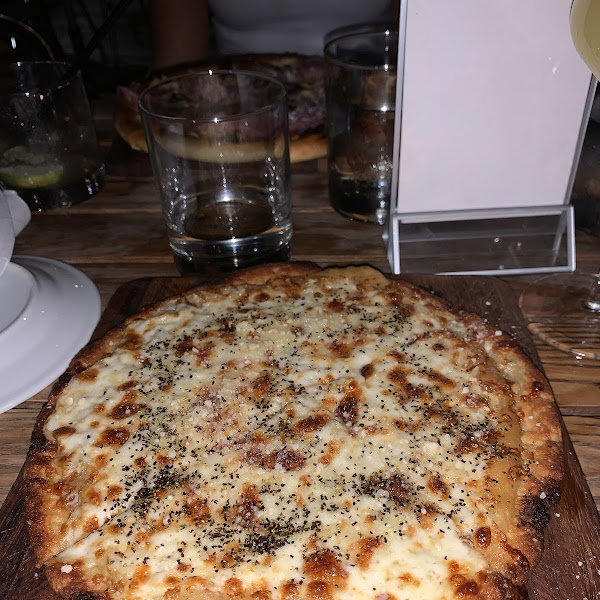 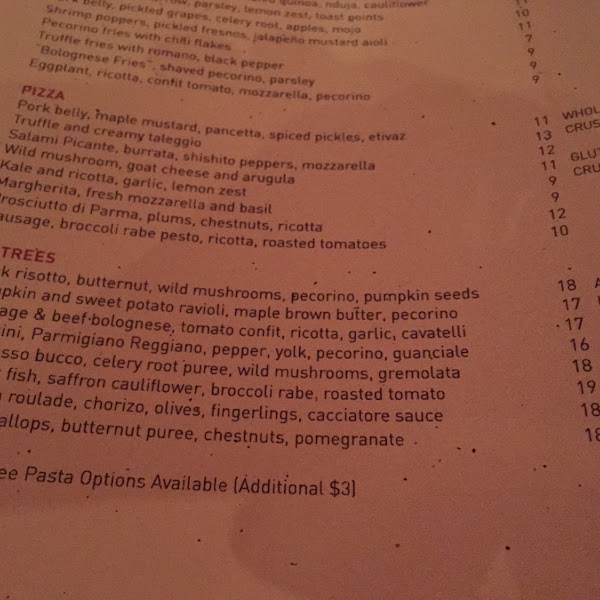 I got the cacio e Pepe pizza and it was delicious! The atmosphere was very nice with outdoor dining. The food was quick to get.. portion sizes were small and it was a bit pricey but it was very good!

Been going to bin 14 for years and I always eat so well! The staff is extremely helpful and the majority of the menu is GF or can easily be made GF. Never gotten sick & am never disappointed.

I spoke with our server in detail and proved my celiac card to her. Ordered gluten free pizza, along with several other “gluten free” items as indicated on the menu and confirmed by our server. Everything was very yummy, particularly the gluten free flat bread and the wings. The pizza was delicious, but not gluten free and I wound up sick for days. I tested the leftovers I brought home with my Nima sensor and indeed there was gluten found. Who know what else I ate that night that was “gluten free” but still had gluten. I would caution anyone with celiac such as myself about going here. Here is an update based on my second visit: First of all, the manager and server were so so conscientious and helpful. They really went the extra mile and looked at everything on the menu so that when I arrived our server pointed out to me all the things that I should or should not eat based on the research that they did in advance. I am so appreciative of all of their efforts! We had a pleasant evening, and all the food was delicious. But I still got sick. I think it’s just a matter of the small space that they are working with and cross-contamination being very easy. It’s also quite possible that I was not paying close enough attention. In the end, I will probably give them another shot, but just limit myself to the couple of things on the menu that I know will be safe. Again, the servers and management staff went above and beyond trying to help me and for that I am most appreciative. And in general the food is delicious, but just not entirely safe.

Nice brunch with cocktails. Nice gluten free selection as well but definitely look out for cross contamination. Not bad though and price is pretty good

Our Celiac son had been to Bin 14 a few months ago and loved it, so this was his choice for his birthday dinner. Our party of 5 started off with some different bruschettas which were good, although each consisting of one single slice. Three of us then ordered pizzas including the birthday boy. They use chick pea flour in their crust which is very good. My wife tried the artichoke and potato rosti and I had the eggplant parm casserole which was fantastic. We had a few beers and wine too. Overall a very cozy place with delicious food, excellent service and most importantly, a keen awareness of gluten safety. We will definitely be back.

Great atmosphere. Some of the BEST Italian food I have ever had. Super safe and delicious. Small plates and bruschetta are great to share and the pizzas are a good size. No reaction. Will definitely return the next time I'm in Hoboken!

Their menu has been updated! Most of the menu can be made gluten free or it already is. The staff was very knowledgeable! For example, they heat up for their gfree bread in a bowl in the oven so it does not touch anything. While there is always a risk because it is not a dedicated restaurant, I felt confident and I didn’t have a reaction!

This is now the best and safest place in Hoboken for people with celiacs and gluten intolerances. They just launched a new menu and just about everything on the menu is gluten free or can be adjusted to make it gluten free. Anything breaded uses chickpea flour so anything breaded and/or deep fried is perfectly safe. They carry a ton of gluten free bread options for appaetizers and also GF pizza crust and GF pasta. The only five things not safe are croutons (for salads), regular pasta, regular pizza crust, meatballs (uses traditional breadcrumbs), and regular bread. I have been told that they use seperate kitchen space for those with allergies but can’t confirm. I don’t know if they prepare the GF pizza on the same oven space as regular pizzas or if they use new/seperate water for the GF pastas. There is a chance for cross contamination (always is unless the restaurant is dedicated GF) but goodluck finding a another restaurant in Hoboken with this amount of incredibly tasty options. Plates are small but priced accordingly. I hope this is a growing trend for Hoboken restaurants (in terms of carrying such vast amount of options and being able to adjust all menu items instead of the traditional GF pizza and pasta options).

Got the grilled octopus on a bed of arugula for an app (very small portions) and then got a GF pizza with prosciutto and arugula on it with EVOO. Pretty good. Pricey but a solid option. I continue to be perplexed by people who put that this place is "celiac friendly" when its not. They use the same wooden pallets to place the pizza in the oven and they don't have dedicated prep tables.

Best place ever! Pretty much everything they have can be made gluten free and they’re understanding!

Ate here for the first time last night with a non gluten-free girlfriend of mine. We both split the lobster/avocado & tomato basil bruschetta (made on their GF pizza crust), fried calamari (GF) and we each had a pizza (1 GF and 1 non GF). ALL of it was AMAZING. By far the best GF pizza crust I've ever had. I ordered the prosciutto, fig & ricotta pizza which was delicious.

Our waitress has Celiac disease so she knew exactly what was safe to eat and what was not. Almost everything on the menu could be modified to fit someone with a gluten allergy/intolerance.

I will definitely be back!

Perfect date night spot. It's a wine bar with a great list and flight options so you can try a lot of different wines. Cozy atmosphere with small plates--shared with non GF who said he couldn't tell. The only thing I couldn't have was meatballs. Ordered a cheese plate and was given GF pizza crust instead of bread. Thoughtful staff!

The gluten free pizza is amazing, and I didn't get sick. Definitely make a reservation in advance.

This place has hands down the best gluten free pizza I have ever had. Great ingredients including chickpea dough! The service was fantastic as I met the owner and chef. Most of the menu is gluten free and I can't wait to go back! It's well worth the visit of you are gluten free or not, but get a reservation as they do not have much seating and it's a popular venue.

Gluten free pasta, pizza crusts, and breads! Really like it here. A bit pricey but we love this place.

Came for brunch. Service was great, but outside of pizza crust menu items weren't labeled. Kitchen was more than willing to accommodate.

GF pizza is really good (best GF crust I've had), and staff is very knowledgeable. Hard to get reservations on the weekend, so plan far ahead!