People are very friendly and the food was delicious. Had choices of bread, wrap or bagel for lunch and breakfast sandwiches. Also several well labeled pastry selections and granola!

The staff were knowledgeable about gf. There were five freshly baked gf options to choose from. It was delicious! 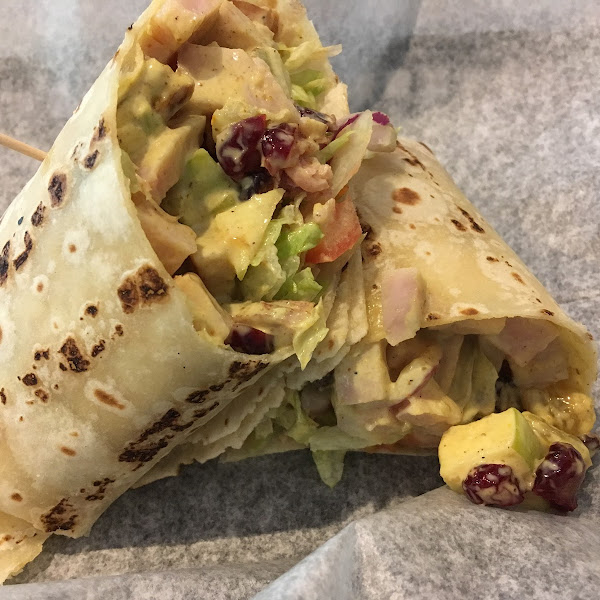 I love coming here for breakfast. Their pasties don’t taste gluten free at all.

We have eaten in and had catering from Blue kangaroo. They are knowledgeable and so accommodating. They have gluten free Sandwiches, salads and desserts available.

Really happy to find this place on the way back home! The best breakfast sandwich! Incredible roll for deli sandwiches as well. Cookies and donuts and muffins...all gf and all SO good!

I've been here a few times for breakfast and just got around to trying lunch. Holy s*** my lunch sandwich was legit the size of a toddler. Breakfast is always good and they have great gluten free treats (cookies, etc) but lunch holy mackerel you could feed a family of 5 with that sandwich

Food is not great but celiac friendly.

the best tasting gf sandwiches and pastries around !

I've not partaken in a sandwich this large in my entire GF life!! There are also many GF bakery items to choose from. Our only non-gf friend was surprised that what she tried was gf. Need I say more? Actually I will, my also rice free son enjoyed a large lettuce wrap which he enthusiastically consumed.

Awesome sandwiches with gluten free bread bagels and wraps. They also have gluten free bakery items like cookies and scones which they say they bake in house. Love the smoothies!

Stopped here for lunch. They have GF tortillas for wraps and GF baguettes for sandwiches. They have a large variety of sandwiches & salads. They also had GF muffins, chocolate chip cookies & scones. We bought muffins & chocolate chip cookies and a turkey club sandwich -- all were good. Sandwiches & salad portions were huge! Server changed her gloves and was very nice --so they are definitely accommodating for GF.

My 12yo had his first official RI "grinda" and LOVED it! Very aware and accommodating. Loved all the yummy looking gf pastries available in the case on the TOP shelf too! Will definitely come again-right near the bike path!

Grinders on yummy GF rolls, giant muffins, scones, cookies, smoothies...The owners and managers are considerate about GF and the teen staff are polite and willing to follow gentle customer tips on avoiding cross-contamination in the sandwich-making area. The GF baked goods are on the top shelf to avoid crumb drift. Good enough for us!

Love blue kangaroo- my celiac teens love having a gf safe place to eat and hang out w their friends- the baked goodies are always amazing. The bagels are great and reasonably priced. Gluten free sandwiches are good too. Love the muffins and cookies!!!!

Offer specialty sandwiches on gluten free sub, wrap or bagel. I've only ever had the sub and it's great. Sandwiches are huge and I've never gotten "glutened." Will visit often!

Great service, lots of choices and delicious food that you can feel good about. I will definitely come back. Celiac safe.

Very friendly and gluten free knowledgeable. I was able to buy Udi‘s large sub rolls. I will be going back soon.

Went on a Sunday for lunch and they were obviously just recovering from brunch rush, but even so, when we asked about gluten free, they just kept pointing to some wrapped muffins and desserts. When we asked about sandwiches they said they had GF bagels and wraps, but nobody had any idea which sandwich fillings were gluten free. Got the impression we were annoying them. We ordered a GF sandwich and a GF bagel. The bagel was okay. The sandwich was not appetizing--I left half of it. Nobody got sick, but we won't be going back unless maybe someone tells us when the GF friendly staff works. Its not Sunday!

I have Celiac Disease and have eaten here twice this week with no issues. I've had the gluten free bagel and egg sandwich which was delicious.

I had a wrap which was unappealing, so I just ate the filling. The butternut apple soup was gluten free and delicious as was the chocolate cupcake. The server were very considerate and followed up when I asked them to tell me if something was gluten free or not. They also wore gloves when preparing my food.

I love this place but can't tell if it is gluten free enough to be celiac-friendly. Homemade granola bars list oats as an ingredient, but no one knew if they were certified GF oats. So they are probably not GF oats. I felt insanely picky asking, and feel insanely uptight mentioning it here. My son with celiac had a GF wrap (the sandwich maker put on new gloves for him <---good!) but the wrap was so stiff the sandwich maker could not bend it around the filling and the whole thing just sort of flopped open. My child did not care. He loved the wrap and just ate the filling. Anyway---I want to give a good review because this is a great place! But I don't yet feel reassured that anyone knows specifics of what some GF diners need.

Had a delicious pumpkin muffin! My wrap was pretty tough but I'm not going to fault them for that. I look forward to trying their other gluten free sandwich and dessert options :)