Lots of options if you’re gluten sensitive... I ended up getting extremely sick from the gluten free corn bread french toast and threw up all day in Malibu. If you’re sensitive to gluten I’m sure you would be happy with this place however I have celiac disease so not good for me.

Sounded like this was going to be my breakfast place while I visited my daughter in Marina Del Ray. I ordered the Corn Bread French Toast that was recommended by my Waitress. Shortly after eating my stomach started to cramp and I became violently ill for the entire day, which happened to be my 42nd Wedding Anniversary. I had to have my daughter cancel the dinner reservation she made to celebrate our special day. If you are Celiac I recommend that you avoid this establishment! 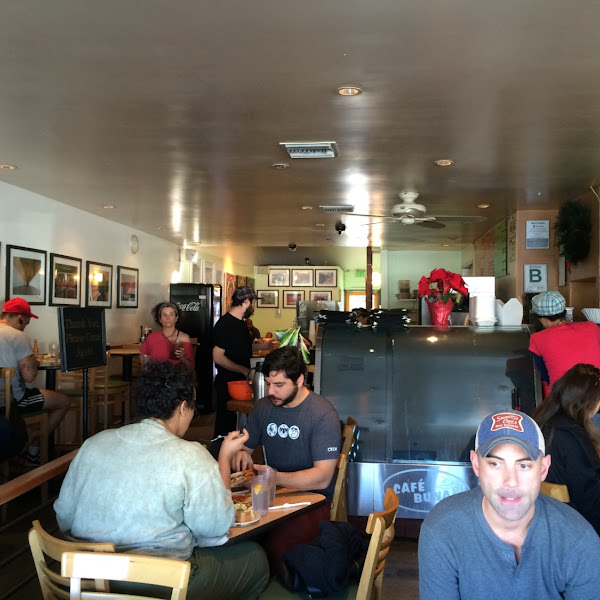 Avoid if you are celiac

Lots of naturally GF items (salads, omelets, grits) along with GF pancakes and French toast made with corn bread.

I am not impressed. We drove out of our way to come to this restaurant because of the gluten free options. The waitress was very unfriendly and unhelpful, I ordered the pancakes thinking they would be easy and safe since they said they were cooked on a separate grill. But when the order came they didn’t have any gluten free syrup and no one seemed to know what I was talking about. Because of their response I do not trust their kitchen to be gluten free. So once again I watched as everyone else ate breakfast.

Amazing food! Just go here! Very celiac friendly and good cc procedures. Sadly the waitress said the homefries are cooked near a shared grill so couldn't have those but the omelette, toast and cornbread french toast were amazing. Great service, amazing coffee and huge portions!

The food is delicious. The service is a bit slow. Had the cornbread French toast, which was SO good but insanely filling. If you come on a weekday it's usually not too busy but weekends are packed

First: Service was great and they were very receptive to my daughter's questions and had her speak with the chef to make sure he used clean pans and avoided cross contamination. She did not get sick and her eggs were great. She also purchased a cinammon cookie that was prerapped and gluten free and said it was quite yummy. their GF options are limited but available and they are celiac friendly. The rest of the family (without gluten allergies) thought the food was fantastic and the coffee was amazing.

Great service and food! Surprised at the recent low ratings. I'm celiac and sensitive to other foods and I did not get sick after eating here. The gf pancakes are excellent! I high recommend this restaurant. The facilty is small and simple. But the service is fast. However due to its popularity be prepared for a wait on the weekends.

There were only a handful of choices for gluten free, including pancakes, as the GF corn bread french toast is no longer on the menu. No bacon or sausage is GF, other than supposedly the vegi varieties (which I wasn't certain about, so I passed on trying those, since many "vegi" substitutes have gluten--and frankly, many real meat bacon and sausages are GF, depending on the brand).

I chose Café Buna based on the great reviews it had.

I explained my extreme sensitivity, as I am a Celiac at the extreme of bodily reacting to cross-contamination (extreme food poisoning symptoms).

The waitress was definitive that only a handful of items were GF...and she was confident they were truly GF (unlike some places that say "well, it only has a little gluten"). She even gave me separate syrup which was GF.

Unfortunately, after eating there I had the worst reaction I have had in 8 years, since before I was diagnosed with Celiac. It ruined my entire day and made a studio tour an absolute nightmare.

If you're a celiac with extreme sensitivity, stay clear!!

Gluten free cornbread French toast. Wonderful. I go here all the time. Friendly, great vibe. Normal eaters seem to like it too.

I don't know why people are saying this place is celiac friendly because it's not. They put dairy in everything. If it's a gluten free food it should also be dairy free and soy free. Use almond milk instead of regular milk and soy-free vegan butter and cheese. Not that difficult.

Tasty, filling, safe. Server was sympathetic, knowledgable, and thorough; she put me at ease and kept me happy.

So happy to have a GF pancake option!!

Had GF pancakes for breakfast this morning - service and food both amazing, I would highly recommend.

Very gf knowledgeable and cautious. Awesome corn bread French toast. Only bummer is their maple syrup isn't real but not needed on French toast. In terms of gf, tons of options and food is fantastic.

The gluten free pancakes here were unbelievably good. The service was fantastic - it is a nice family owned restaurant that serves lots of locals! It is celiac friendly as well. The staff has separate grills and utensils for the gluten free items so you don't have to worry about cross contamination if you are a sensitive Celiac like me! I am definitely heading back here and I would recommend this place to everyone!

Most educated servers. Best GF options. Best preparation knowledge for Celiac GF!!!! Very organized processing of customer movement in and out for a tiny little city cafe that is noteably popular:) BRAVO!!!

Loved the atmosphere, attentive servers. Wish the toaster had been dedicated, but the omelets made up for it. Recommend!

I LOVE it here. They have the best brunch ever. Their GF pancakes are delicious! It can get a little noisy in there, but it's totally worth it.

My kids enjoyed the gluten-free pancakes. They are prepared on a dedicated grill which was impressive. The gluten-free toast is not made in a dedicated toaster. We liked everything else (coffee was awesome!) but would agree it's a bit noisy.

Everyone is right! Amazing GF pancakes!!

Enjoyed the GF French toast! The rest of my family enjoyed the non GF food. Can get a bit noisy during busy times.

Best gluten free pancakes I've ever had. And after being gluten free for nearly a decade, that's sayimg something! Oh, and their coffee is delicious.

They have THE best Gluten free pancakes and french toast. They have GF maple syrup. Hands down my favorite brunch spot. Great service as well.