Very limited menu and most of their meat is cooked in beer so we can’t eat it. I had a salad with grilled chicken and it was really good, my husband had the burger with cheese on lettuce but it was bland no seasoning We had the stuffed plantain with pork and it was really good I might go back just for the salad

Very limited didn't have the gf pizza crush when we went.

Limited "GF" options, but be careful cause they list such things as french fries on their menu as GF, but they are all made in a shared fryer. Its a pet peeve, but I find it very misleading to go out of their way to designate things on their menu as GF, that those of us with celiac couldn't/shouldn't eat.

With that said, we tried the smoked chicken drumsticks which were very tasty. The coal oven wings, decidedly less tasty.

They subbed out french fries for potato salad, to go along with my ribs. The ribs were ok,

The waitress was friendly and helpful and felt bad about the misleading menu. 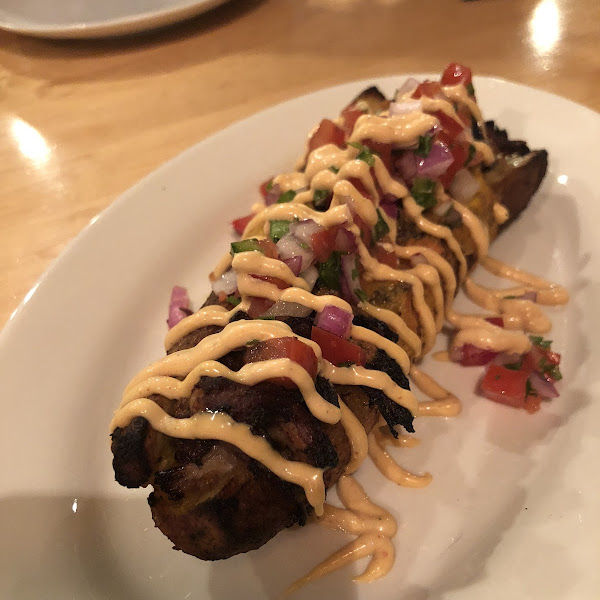 My 13 yo son Celiac and we went there because we heard there were GF options. Menu says they have GF pizza, but it turns out they stopped making it based on their feeling that there was 'inconsistencies' with the crust. I then asked about a dedicated fryer and was told they had one. After we picked something, the waiter came back and told us that they no longer keep the fryer dedicated because the regular food is too high in demand. Since there are basically no GF kids choices, we then chose GF wings. I explained to the waiter that he has Celiac, and I was assured they were prepared separately and done in the oven. The manager or cook (?) later came over and explained the same thing. Feeling good, we anxiously waited for the wings. When they came, my son started eating them. As he was doing this, I saw several employees talking and looking concerned. The manager came over and told him to stop eating them, because they were not 'really' prepared GF. They agreed to do them over, and they did, but by this time, my other son and I had already finished our meals. When they new wings came, they did in fact look different, but my son was now afraid given the first mix-up, so they went untouched. The manager was sorry for the mistake, but we could have had real damage. Luckily my son didn't eat enough of the first potentially non-GF wings to cause a problem. Use extreme caution here.