I loved it here! I was able to eat Mickey waffles and bacon with some fruit on the side!

Amazing breakfast and service in Disneyland! Before we were seated the server asked if anyone had a food allergy. We tried three different gluten free meals: the Mickey shaped waffles, Eggs Benedict, and Oscar’s choice. All of which wee fantastic and NO REACTIONS! Also, it’s very cute and they have heaters outside in the patio if it’s too cool outside. Fast and accurate service as well. :)

Great burger. Fries are not cooked in a dedicated dryer, so I had to go with broccoli. 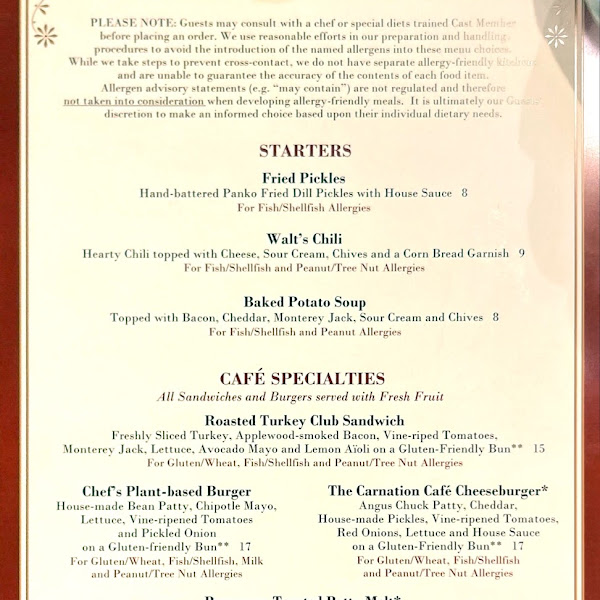 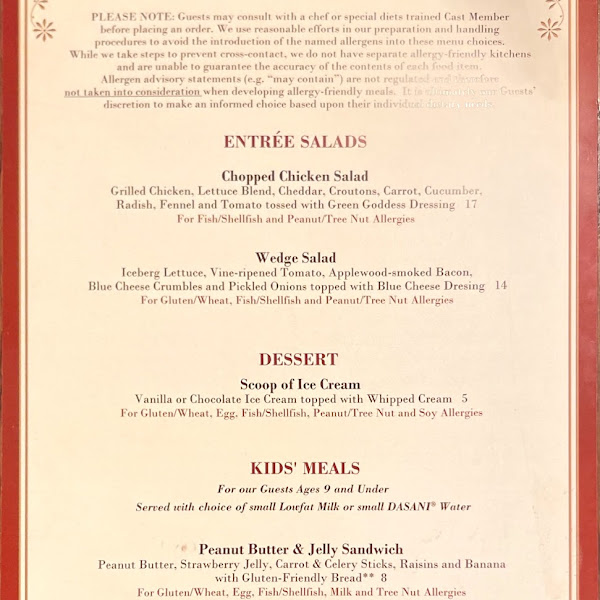 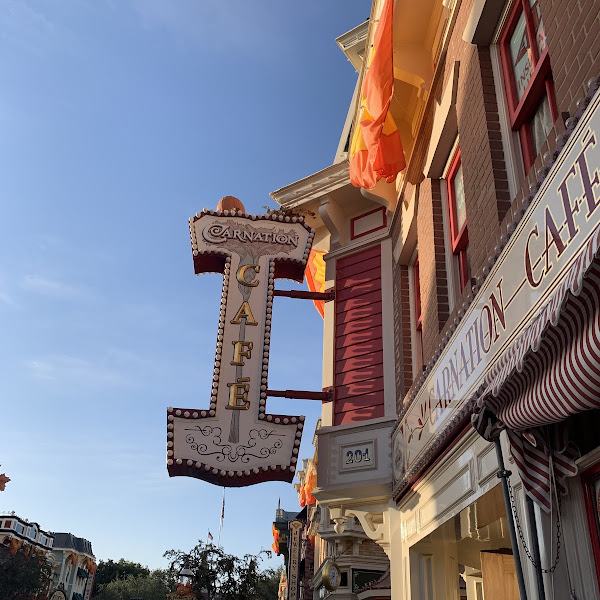 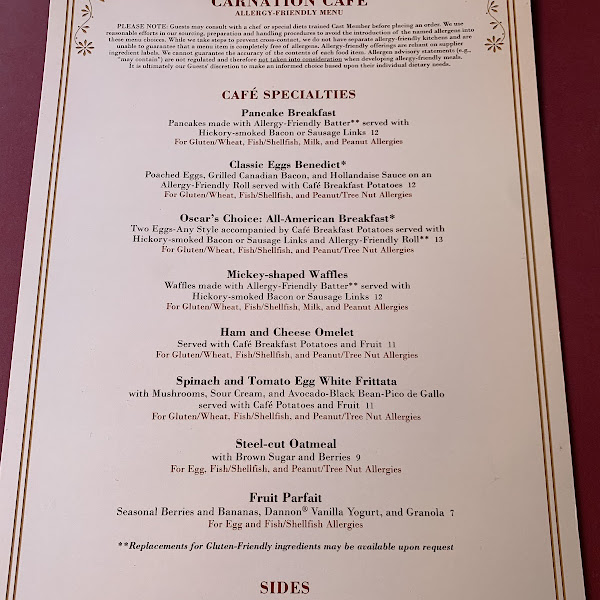 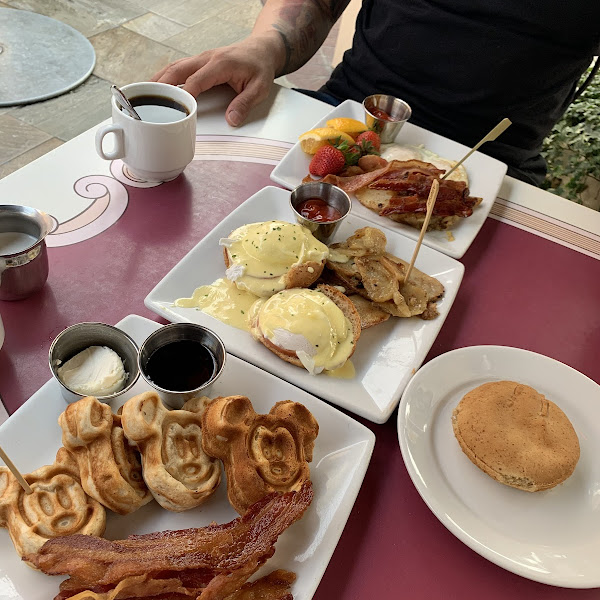 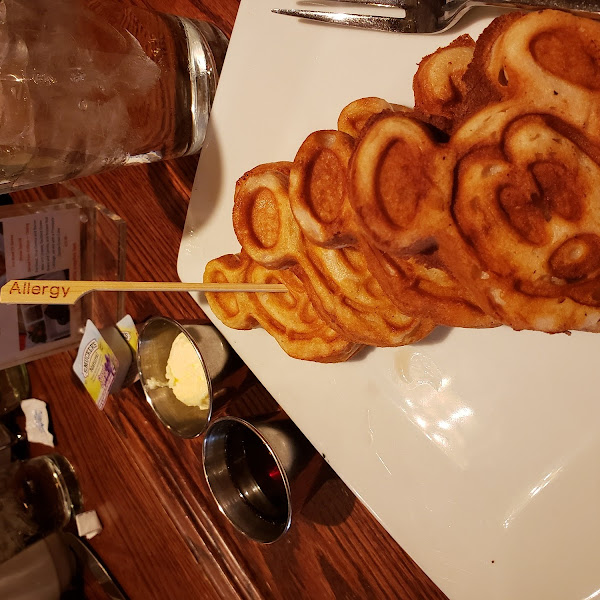 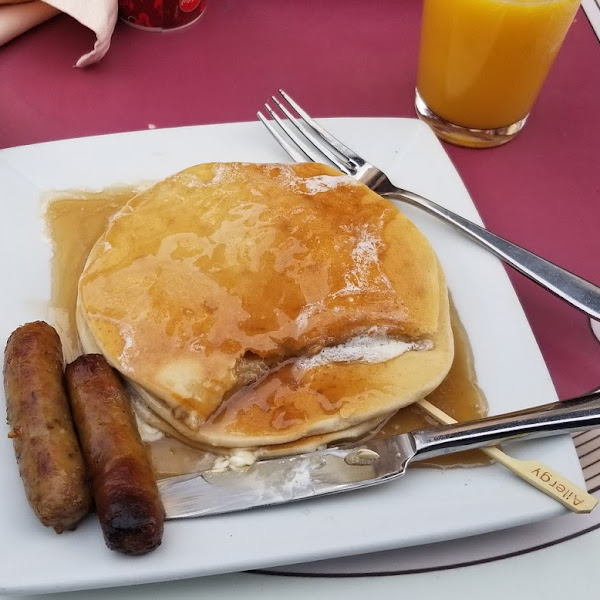 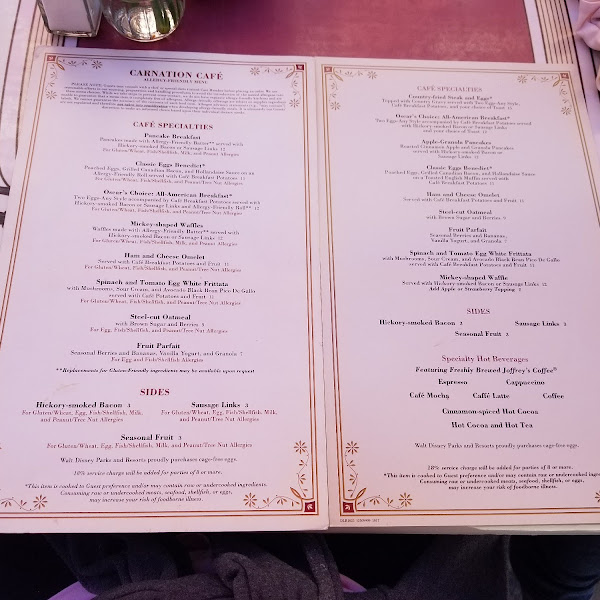 Ate here with no problems. Have gluten and dairy allergies, so choices available are more limited. Talked with chef and modified a turkey sandwich subbing bacon for the cheese. Little bummed that they wouldn't do a direct swap, instead they charged me for the add on. Fryer here is not dedicated, so only option is fruit. I sort of knew that coming in, so I brought a bag of potato chips with me to have something salty. Overall, it was pricy for a sandwich that I could get elsewhere in the park cheaper, though sitting on main street while the bands go up and down made it more worth the cost.

*Breakfast Review* I ordered GF Mickey waffles (Yay!!!) w/scrambled eggs off of the allergy-friendly menu. Our waitress made note of my allergy, said that they are very conscious about cross contamination with allergy orders, and was happy to answer all of my questions. The GF Mickey waffles are made with Bob's Red mill mix, and I ended up ordering sliced banana to top my waffles to avoid high fructose corn syrup.(Log Cabin maple syrup is served on the side) Great service and yummy food!!!!

I ordered gf pancakes here and I was so excited! They even tasted like regular pancakes! They had the chef come speak to me and I was treated as if they were excited to serve me, instead of a burden like so many other restaurants do. The food was so good and even though I have celiacs I did not get sick! Will eat here again next time we come to Disneyland :)

The staff was very knowledgeable, and even knew about CC! They had an allergen friendly menu, and made sure to know all allergies. This is definitely our favorite.

Eggs benedict was fantastic and I had no reaction. Order taken and delivered by the GF liaison. The prices are also amazingly reasonable for Disney sit-down. Make a reservation.

Great options - Disney staff are very accommodating and knowledgeable! Ask for an allergy menu and look for the items marked 'For Gluten', meaning for people with a gluten allergy (or celiacs).

Amazing breakfast place at Disneyland. The prices were fair and there was a good selection for gluten free. I had the spinach egg white frittatas that were shaped in mickey heads. Highly recommend it!

I have eaten here twice and both times they have went above and beyond.

Been here twice in the last few months and it's been awesome both times! Haven't gotten sick plus amazing choices, gf/ allergy menu has almost the same choices as the regular menu just with a few modifications. Both gf and not gf friends loved it!

Ordered the bacon cheeseburger and came with a side of fruit. Didn't feel sick after and enjoyed the burger. They do not have a separate fryer for fries, just an FYI. Staff were amazing to my needs!

This restaurant was the same as all Disneyland places. GF options...Chef came out and spoke with us about our allergy and we ordered with specifics. They are always careful about cross contamination but can't guarantee but I have never been affected and I am highly sensitive celiac. Great option to eating inside the amusement park.

A decent place to get a meal while you are in Disneyland. They are careful in food preparation and do gluten free right. It's also very convenient to get a meal right in Disneyland that is safe. As is the case with Disney, it was overpriced for what you get. Also, they must not have a dedicated fryer for french fries - I ended up with fruit with my burger.

Classic Disney attention to food allergies, with a personal visit from the chef. GF options are somewhat limited, but there are still choices. We all enjoyed our food. Service was fairly good. Ambiance/menu was not my first choice, but it's what we got for short-notice GF.

Not a lot of options. The hamburger option is $18 you can get a cheaper burger at any quick service.

Love this place! My 4th visit in 3 yrs; never been sick. I have many food issues so the chef always comes out to talk to me. Burgers are the best but the roasted turkey sandwich was a nice change.

Extremely good experience. Chef came out and talked to us. Explained exactly what and how they prepared all the GF food.

I ate two meals here (breakfast and lunch). Both were delicious and I had no reactions. The chef and both servers were very helpful and kind. Made for a great experience.

When we put our name in at the Carnation Cafe they asked about allergies. I told them I had Celiacs, but don't really expect them to cater to me. When we sat down the chef came out to go over the menu with me. There are several items like chili on the menu that are gluten free and they substituted their brioche bun for a gluten free bun. As anyone that was a foodie before celiacs knows, there is no such thing as good gluten free bread, but as time goes by it is getting better. Their gf bun was actually pretty good!Now for the best part, not only did the chef take my order, but he prepared it and delivered it to me to avoid cross contamination! As Disneyland has to cater to a lot of different folks they can't possibly have a gluten free facility, especially as we make up a very small portion of the population. That said, they went way above and beyond. I left feeling pretty sure I would not get sick... And I didn't! Note to all of the haters out there: Disneyland no longer has a Gluten Free list because of all of the Celiacs that gave them a hard time over certification. Please stop trying to make your problem everyone else's responsibility! It is causing businesses to avoid trying to help us!