Crabs - We Got Em

Staff was EXTREMELY unknowledgeable about allergens and was super unhelpful with EVERYTHING. She tried to tell me that boiled potatoes have gluten in them because potatoes naturally have gluten.

So, I said, “do you happen to have a gluten free menu?” The waitress said, “um... no. And.... we’re discouraged from making any substitutions so.... I’ll be back to take your order in a minute.”

I probably could have asked to speak with someone else, but I was pretty shocked by the response so I didn’t bother...

Delicious! Super fun seafood restaurant right on the beach. Items are not marked but I asked a lot of questions and was able to eat crab, shrimp, new potatoes and corn. Had to ask them to hold the rolls. It was a good experience overall and I would go back! 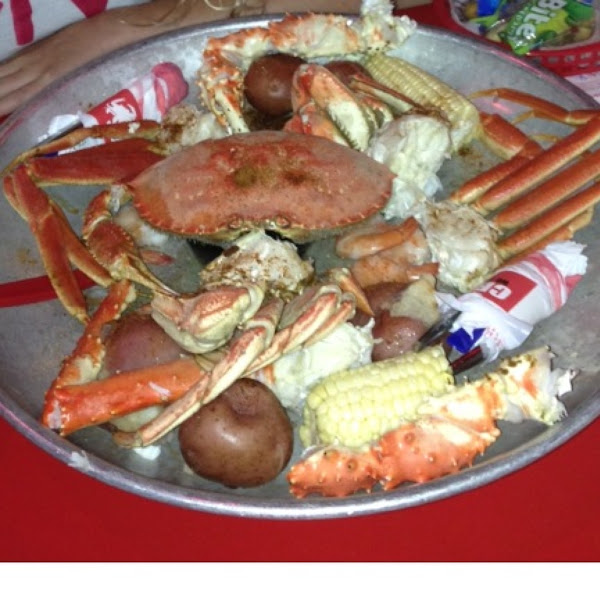 While Crabs does not have a gluten free menu, they do have several options that are gluten free. Their Conecuh sausage is gluten free along with any of their steamed crab items, salads without the croutons, and their baked fish platters. Their veggies and red potatoes are also gluten free. Our server was knowledgeable and made sure the kitchen staff changed gloves and no cross contamination occurred. Be sure to Inform them that you have an allergy.

Before visiting Pensacola Beach I emailed them to see if they had gluten free options safe for celiacs. I never received an answer. The waiter wasn't knowledgable. The manager came to my table to tell me what on the menu is GF but relied on the waiter to discuss my needs with their chef. I had steamed crab legs that had a Cajun seasoning on them that concerned me but I was assured it was GF. There was nothing special about the boiled potatoes. The corn coblette was soggy. They substituted asparagus for the sausage. The sausage is not GF. The asparagus was tough. The menu here is exactly the same as Flounders so if you have a choice choose Flounders. I gave Flounders 5 stars.

What you can eat here is good but I wouldn't suggest it for anyone with Celiac.

Crabs is not Gf nor are they very knowledgable. They use beer to steam the shrimp. Be very careful.

I am a GF vegetarian that also doesn't eat seafood. We went here because my hubs wanted crabs. I called ahead of time & asked to see if they had anything for me. She stated that the chicken marinara was over GF noodles. We got there & the server said the same thing. I was a little hesitant because the menu didn't say anything about GF noodles. Finally the waitress came back & said that they weren't. Not sure why they told me they were. I ended up with a salad, corn, potatoes & broccoli...which was fine because I don't expect much from a seafood place when I don't eat seafood. I gave this place 3 stars because they seemed clueless when it came to GF items on their menu.

We truly enjoyed our meal last night. 2 people in our group of 5 have celiac disease. Our waitress, Sarah T was awesome. She checked on everything for us! I had peel and eat shrimp. She checked the old bay seasoning and cocktail sauce. I wanted to try my daughters cole slaw that was in a separate dish- she checked that too! All GF. She served my dads fries separate from the steak so I could try that also. My son had crab legs with boiled potatoes - they swapped the sausage for broccoli to keep it GF. My son had a reaction to something, but it could have been the corn on the cob since that grain sometimes gets him. Over all it was a great experience with good portions and I wouldn't hesitate to go back - they took great care of us !

The food was good and the waiter tried his best to make sure everything we ordered was gluten free. Unfortunately, something we ordered did have gluten, making me sick the entire night. We will not be going back.

The waitress was extremely helpful and went directly to the kitchen manager to notify him of my Celiac. Because of a previous review, I asked about the steamer. We decided on the steamer for one which fed 2 of us until we were stuffed! This is a must revisit! Great service and great food!!

They do not have a gluten free menu. The waitress was friendly, but not trained about allergies. I spoke to the manager, who was friendly and well trained about allergies. He said I could have the shrimp and grits for about $20 or the steamer for two. The steamer was not on the menu.He even checked that the sauce for the grits was ok. We splurged on the $60 steamer for two, which fed 3 of us until we were at the point of bursting! It had lots of crab legs, small boiled potatoes, shrimp,and corn. They steamed the sausages separately and served separately, as they were not sure if they were GF, so I didn't chance it on the sausage.I also had some Angry Orchard cider,too. The restaurant has a nice beach view.