Server knew their stuff, had some great gf crust! My friend said it was just as good or better then reg crust!

The server was knowledgeable about the gluten free offerings and explained how cross contamination is avoided in the kitchen — the chefs are trained to avoid it. The gluten free food came out separately from the gluten full food. There was even a gluten free dessert! My son with celiac had no pain after eating here. Highly recommended for people with celiac.

I've eaten here multiple times before (in DC, Bethesda, and St. Louis) and have had great meals. Tonight the pizza was not good but worse I came home and was immediately sick-- I'm assuming cross contamination-- beware if you have celiac! 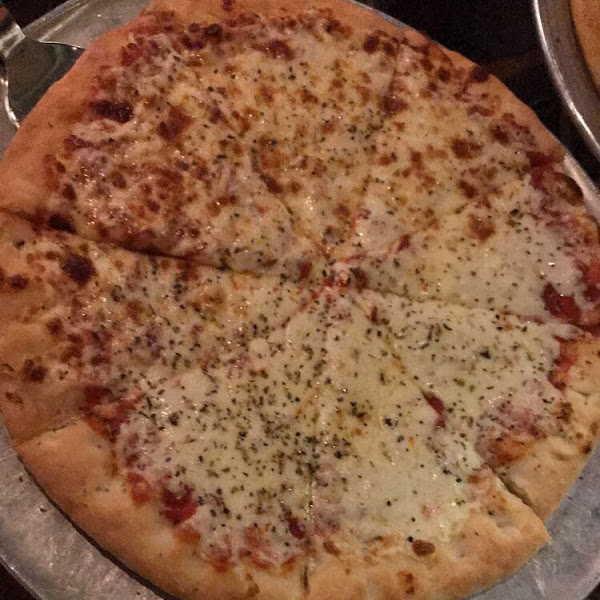 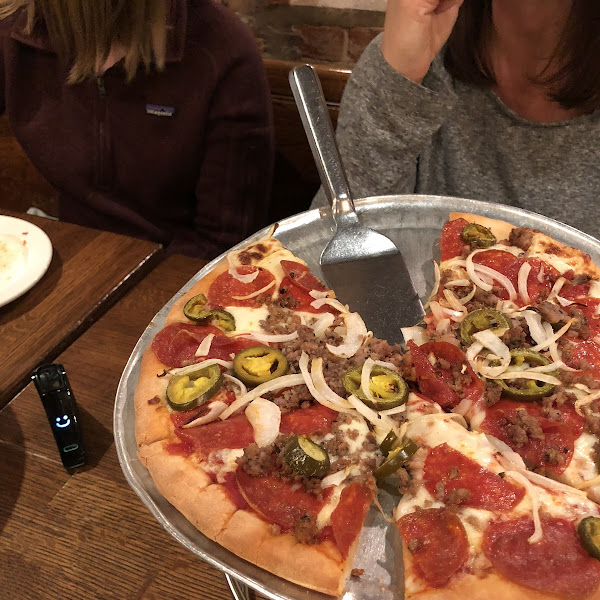 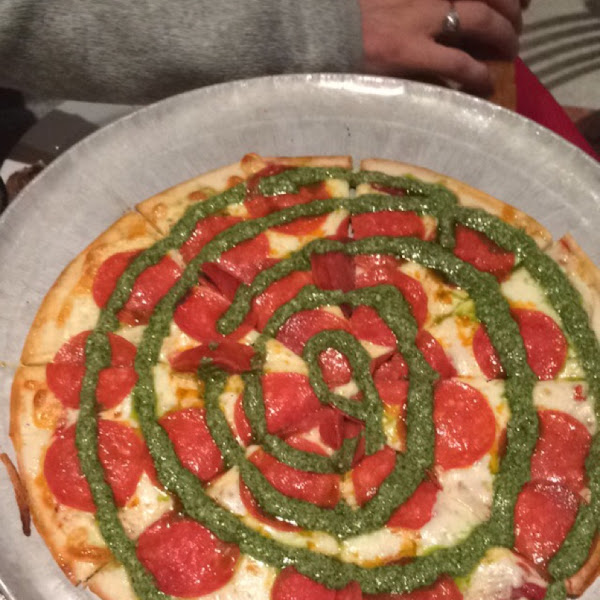 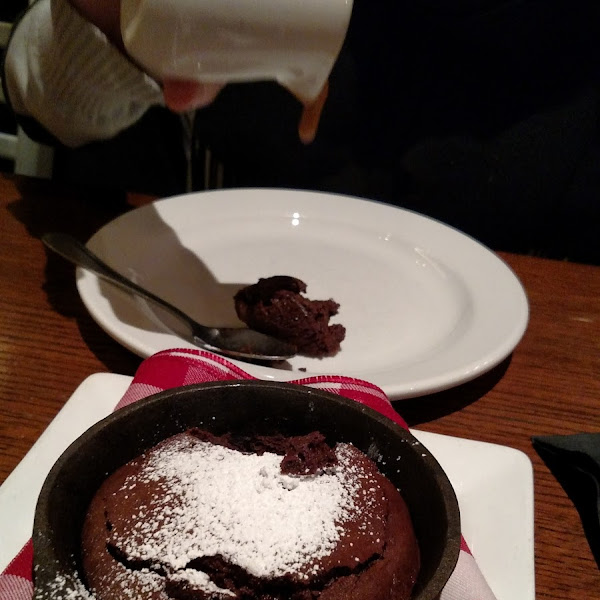 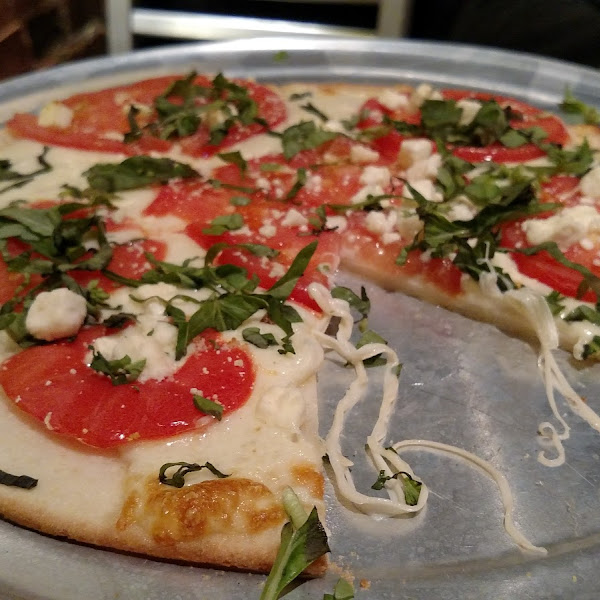 I have eaten at Pi in DC and St Louis. Loved their crust. Went this week and was served a very different crust. The waitress said it was new. More like bread than pizza crust. Definately not good

The gf crust was pretty good, like a crispy thin crust, but I was disappointed because the waiter pointed me to the only two ingredients they for sure knew were gf, the vegan dairy free cheese and vegan Italian sausage. I ended up getting a veggie pizza to be on the safe side but it would’ve been nice to have pepperoni or sausage on it. Overall the experience was good but it isn’t the best gf pizza I’ve ever had and I wish the server was more knowledgeable about which meats were gf.

Amazing gf pizza! I’m still dreaming about it. I’m a celiac and didn’t get sick.

Best pizza I've ever had while gfree, super nice and helpful staff, great all around

So my wife and I tried this place tonight based on the reviews. I have celiac and need to eat GF, she does not. We both had a Hill without Olives. She really likes her pizza and ate more of hers than I did mine. I thought mine was very good but expected a little more flavor.

The crust o. The GF pizza here is really good and it is more like a hand tossed and it tastes like a real pizza crust (like the old days). I would’ve given them 5 stars but the service was a little slow and I needed to add pepper flakes to get the flavors to pop. Other than that it was quite good and we’d go back.

I did NOT get sick and my blood sugar didn’t pop like it does with many other places. I’d recommend trying this place.

I was stressed, as always with pizza place, but they know what they are doing and cook the pizza separately in dedicated oven. My son loved it but too greasy crust for my wife. I guess all taste are in the nature! Great place love the ambiance.

Awesome pizza. Dairy free cheese that was good as well!

I love their GF crust! It’s not super thin, it was firm & crunchy and actually cooked through! I had one with spicy sausage and cherry peppers! The bartender let me know that they change gloves and the GF pizza is cooked on special pans.

Terrible experience with our server. They asked us our drink orders 3 times. We ordered a GF pizza with half one kind and half another. The pizza we got was only one kind, which we brushed off and started eating because the crust looked like a GF crust. The server came by and immediately said that it was NOT the GF crust, after I had had a few bites. They apologized, offered a comped GF pizza, the supervisor came by and asked if we wanted to file an incident report. We said no but I’m regretting it now.

The server was very friendly. The pizza was good but a little bit mealy.

We were only in the mood for drinks and dessert. This place hit the spot!

First time there was fine, pizza was delicious, no issues getting sick. Second time I got super sick and all symptoms resembled getting glutened. I won’t be going back and definitely discourage any celiacs from going.

Excellent food. My 12 year old Celiac kid LOVED this pizza. Staff was knowledgeable and attentive. My 5yo non-Celiac loves the pizza as well. Will definitely be back.

Staff was knowledgeable and gluten free pizza was fantastic. My celiac daughter said it was the best she has had!

Good safe gf pizza options. Beer too. Would go back if we weren't leaving tomorrow.

One of my favorite gfree restaurants in DC. Pizza is great, wings are gfree. Never had a cross-contamination issue here

Very celiac friendly! They have several GF options each for appetizers, salads, pizzas, and desserts. We had the Bada Bing salad and the GF pizza, both of which were excellent. Our server was very knowledgeable about GF issues, and gave extensive assurances about measures taken to avoid cross-contamination. Definitely recommend!

This is the better pizza I've tried

Seriously the best GF pizza- you will not regret it! Menu is clearly marked and staff was knowledgeable. Plus GF adult beverages!

Only salads and pizza GF.. no apps. Very cautious with cross contamination. Good pizza with great flavor. Even vegan options too!

Great GF pizza! Crust was thicker than normal GF crust and had a nice chew. My 6 yr old has celiac so it was plain cheese but think it would be excellent with a few toppings. Nice to add another safe pizza option to our go-to list.

It was stressful being there with a large group of non-gf people. When the waiter brought out the first pie, we asked if it was gluten free and he said, "I think so." Wrong answer. I said, "I don't want, I think so, I need certainty." It turned out it was someone else's non gf pizza. When they brought our pizzas, they didn't necessarily put them out in front of the people who ordered them, which obviously was uncomfortable for me, trying to keep my son's food safe from cross contamination. I had to use a napkin to hold the hot tray and move the pizza myself and then the waiter, without thinking, pushed two pizza trays together to make space and touched someone else's pizza to my son's gf pizza. Of course I freaked out and quickly removed the contaminated slices, but a different waitress told me she'd bring him a whole new pie, put a rush on it, and comp it. So, I appreciated that. I think it would have been fine if our whole party was gluten free and they certainly made good on it. But-what if I hadn't been watching like a hawk? Then my son might have gotten glutened. I'm still going to say it's Celiac friendly, clearly the first waiter had some learning to do, but I think I schooled him, but as always, diligence is a must.

The best gluten free pizza I’ve had by far. I was genuinely concerned my pizza wasn’t gluten free because the crust was too good.

Very good restaurant for celiacs. At first the woman at the door wasn’t sure about celiacs so she called the manager. He assured me that everything would be prepared safely and that the staff and kitchen were aware. Our waitress was lovely and took gravest care of me. The pizza was good, though very cheesy, and I had the chocolate skillet cake for dessert (also gf). Both definitely worthwhile and safe for celiacs.

Wow! I cannot believe how delicious this pizza was. I just had cheese and pepperoni and it did not disappoint. Make sure to put this on your list of restaurants!!

Delicious gf pizza crust (one of the lightest/fluffiest I’ve seen). I only tasted it as it was for the kids, but they loved it & I had no issues from the 2 bites I had (I’m celiac). Recommend.

I am celiac and very sensitive to gluten. I had a delicious pizza and the chips with French onion dip - both delicious! Highly recommend!!

Went right before a hockey game with a big crowd and had no issues with their GF pepperoni pizza. They take a lot precautions

Great pizza for us and for our celiac daughter! She said the best she never had in the states! Very careful of cross-contamination too!!

Truly the best GF pizza crust I've ever had.

Loved this place! Server was knowledgeable and helpful. As a sensitive Celiac I had no issues.

Really yummy gluten free crust. My husband also had the EVOO and garlic instead of tomato sauce and everyone thought it was wonderful.

I’m a super sensitive coeliac. I had a white sauce pizza with leeks, the server informed me that the white sauce was not GF and subbed for EVOO and garlic. Staff very knowledgeable, they also had delicious cocktails. Vegan options were available for topping, but the GF crust contained eggs :(

Ate here yesterday and didn’t get sick at all and I have celiac and am super sensitive to cross contamination!!! The pizza was decent tasting. If you’re looking for pizza in DC this is a good place to eat.

Excellent gf pizza. Chips and dip good too. Delicious for rest of family too. Gf wings.

Great experience. Out waiter reassured us that they used separate utensils and pans and went to extensive efforts to avoid cross contamination. I did test our pizza(crust, sauce, and meat) with my Nima gluten tester where the pizza was sliced. Tested as gluten free! We will be back!

GF items marked on menu. Wait staff told me how they handled things in the kitchen. Good pizza. Overall, though, service wasn’t great and it was pretty loud. But, two celiacs and no reaction!

Fantastic restaurant and very Celiac friendly. Best gluten free pizza we've had since being diagnosed. The wings and chips & dip were also great. Highly recommend will definitely go back again while on vacation!

Amazing GF pizza and chocolate cake! we will definitely be eating here again.

I've tried lots of different gluten free pizzas over the years and this was one of the better ones. The waitress seemed knowledgeable about Celiac and was well-versed in their gluten free options. Whatever cheese blend they use is delicious! As usual, the GF pizza only comes in one size and I easily made two (almost three) meals out of it.

It was good and the waitress said they would take precautions to keep from contaminating my food, but I could tell 24 hours later that I had been gluten-ed. Plus they do not have any white sauce pizza. My husband has GERDs, acid reflux disease, so he had to scrape off most of the sauce and take extra medicine.