I’ve been here a lot, and I have a severe sensitivity to gluten and a sensitivity to dairy. The cool thing about this place is that nearly everything is gluten free, so they merely label the items with gluten. I’ve had tons of fried food, the dessert, ribs, fish and chips, sides, and never had a reaction. It’s the safest place I’ve been to in South Lake Tahoe and it’s a must for whenever we come up! I love it!!!

Super knowledgeable and kind staff. Waitress (Tammy) was able to direct me beyond just saying what was GF- I’m celiac, and currently following FODMAP diet and they knew their meals inside and out. Food tastes AMAZING and it’s a reasonable price. Going back every time I visit. No negative reaction that evening or next day.

My new favorite place in South LakeTahoe. I cant rave about there chips and chicken enough and the calamari is amazing! 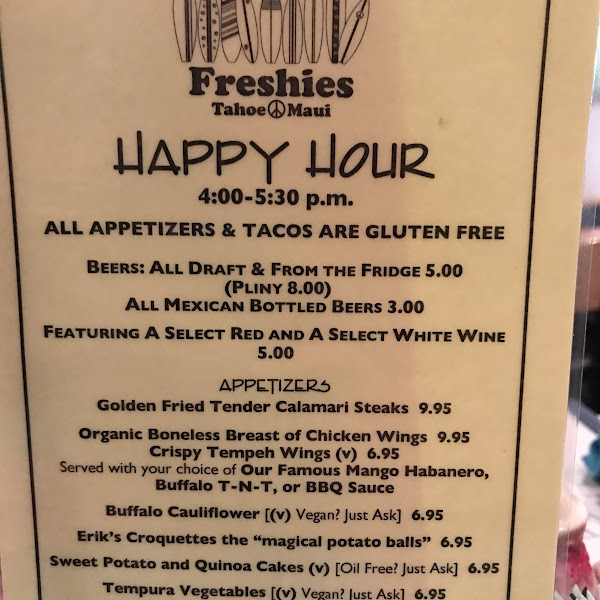 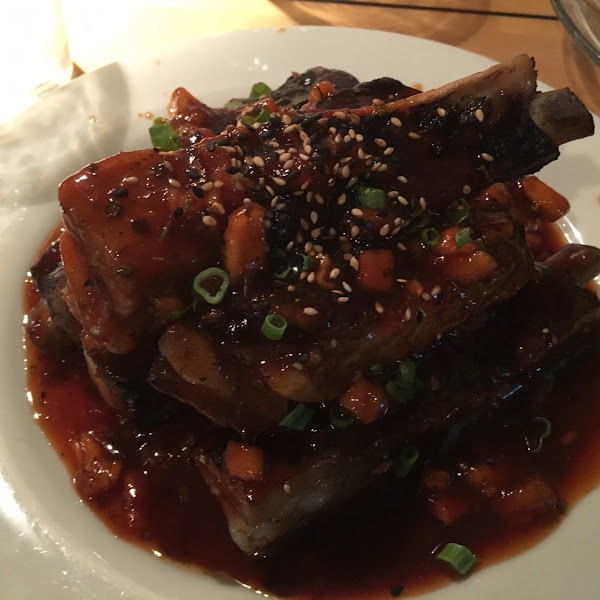 I really really wanted this place to be celiac safe, but I’m afraid it’s not. While they have an amazing amount of GF offerings on the menu, somewhere along the line things get cross contaminated or there’s an ingredient they use in something that has hidden gluten. I’ve been there 2 times, and after each time have ended up with full blown celiac reactions of multiple kinds both times. I plan on going in to speak with a manager to try to figure it out because both times I’ve gotten very sick! I was told the fryer was safe (maybe it’s not) and that they use only rice flour. Although the entire menu isn’t gluten free, so there may be some food handling issues or such. Diners with celiac beware!

Almost everything is GF! Dedicated fryer and rice flour means I can eat fries. Service is slow but we weren’t in a hurry.

Don’t let the Hawaiian theme decor deter you as the menu had lots of variety. Our food was delicious,very knowledgeable staff for Celiac safe eating. Gloria - celiac

Many options for gluten free. Highly recommend the buffalo cauliflower appetizer & the Ahi Tacos. They were amazing! The stir-fry was ok.

Best gf in Tahoe! The fries are awesome. We have been there more than a dozen times.

This is my favorite restaurant in town. Staff is extremely knowledgeable, separate fryer and use rice flour. Many options for GF and Vegetarians and Dairy Free. Mango Habanero Wings, Crunch Salad and any one of their fish taco options will put a smile on your face!

Odd location, but the staff was very kind and helpful. I ordered the noodle bowl with rice noodles, it was good! My husband had the fish and chips, he isn’t gf but enjoyed his as well. Overall it was nice to have so many gf options, but neither dish was amazing. No reaction.

Our favorite GF food on the Lake

The staff was super friendly and really willing to accommodate me, but I was glutened here. The food was delicious but the after effects were not.

drive up to the location and you would not expect a restaurant of such quality, but you would be wrong. This will be a destination on our next trip to South Lake Tahoe. We ate there twice and both times the food was excellent. Very Celiac friendly, I am very sensitive and had zero issues, fantastic. To top it all off the service was wonderful, they were very attentive and helpful. Very comfortable environment to just sit back and relax in.

Excellent staff. Almost everything is gluten-free. It was great to be able to have a teriyaki chicken. Had the halibut blackened with a Caesar salad and it was amazing.

I ordered the pork spare ribs, delicious! What a great tang the Hawaiian BBQ sauce had. Service was decent, but next time I'd be there for either lunch or dinner. We were in between when shift and menu change happens.

The restaurant is located in a old strip mall and the indoor ambiance is not great the outdoor upstairs patio is nicer. That being said they had many gf options you don't find often including fish and chips, battered fish tacos, rice flour tempura, and battered chicken strips. The tacos were very good they were served with black beans and rice. The fish n chips everyone thought were very good also. The tempura lacked flavor but we were overall pleased with so many great options and I didn't get sick.

Kind of a hole in the wall place, but so many options!!! I had the taco platter with one blackened chicken taco & one pork taco. It was DELICIOUS and very filling - healthy portions! Friendly staff who answered all my questions and seemed knowledgeable. Definitely seemed like a place popular with the locals so that's normally an indication of a gem!

The ribs were great. Pretty much everything is gluten free except the bread. I got the curry soup which was not the best but the ribs made up for it. I probably should have gotten the fries.

Wide selection of gluten free items. The service is excellent and the food is very good. Many of the homemade sauces and dressings are gluten free as well. The staff is very helpful and pleasant. Sit upstairs for a great atmosphere at sunset.

So incredible! My friends and I are all celiac and came here to eat twice over the weekend. We all ordered different things each time and had the most awesome experience! I highly recommend this place!

Freshies is a wonderful Celiac friendly restaurant with so many options. We drive up from Stockton just so my wife can have some choice. Nice staff with excellent service

Freshies is my go too place very time we visit Tahoe. I have Celiac Disease and am always nervous about eating out but I've never had an issue at Freshies. the staff is very nice and the food tastes great....their Pho, tacos, and chicken strips are my faves. great housemade drinks as well. Only complaint is that the service is slow, so not a good place to go in a hurry.

I ordered the chicken tacos. It came with rice and beans and some chips. I had no problems with this meal. I felt fine after eating. the meal itself was a bit bland. however they had a gf brownie dessert. it was excellent. Very nice waitress Victoria.

Very yummy!! Would go again. Not Gluten friendly necessarily but I just ordered my sandwich without the bun.

I've eaten here twice, in 2011 and 2015, and have never been convinced it's as safe as other people think it is. They don't have a gf menu, but if you ask you'll learn their fryers are gf, the breaded items are rice flour, etc. They do have sandwiches on non-gf bread. The kitchen is small though, and I'm a highly sensitive celiac. This week I had fried fish tacos and salad and had GI problems afterwards, but maybe my body just isn't used to fried food. My personal belief is that they don't indicate anything is gf because they dont want the liability and there is a high risk of xc. If the food was better, I'd go back again anyway because maybe I've just had bad luck, but my husband makes better fish tacos and salad at home. Oh the french fries were delicious though! And who knows maybe the fries weren't gf, hard to feel confident without an indication on the menu. I felt like my server didn't know as much about gluten as she should have but she asked her coworker for me.

My friend and I enjoyed our gluten-free meals so much after a day skiing nearby recently (OUTSTANDING food at fabulously reasonable prices) that we are driving a 4.5 hour round trip just to eat at this restaurant again tonight. Every dish was so fresh and so beautifully prepared, and portions were generous. The only thing that would improve the food from my personal POV is that one of the dishes had a touch of anise flavor in it, and I dislike that. But the sheer number of gluten-free options, and the friendliness of the servers is such that this will definitely be my restaurant of choice whenever I'm in the area. I tried 3 different dishes and they were all excellent.

So many gluten free options and great service. Fish and chips, calamari, chicken fingers, and more!

great food. all fryers are GF. had fish and chips my husband had chicken and chips. could have had more seasoning but it was light and thoroughly enjoyed it. staff is friendly and attentive. will definitely eat here again.

Glad we stopped in on our drive around the lake. Food was great!! The service was great!! The wait staff was very knowledgable and took the time to answer all our questions. We will definitely be back.

Most everything is gf with a few exceptions; they use a rice flour tempura and all tamari soy sauce. We had fish n chips, fried calamari, and the chicken sesame salad. Excellent quality. Just make sure to say no to the malt vinegar. Most desserts are not gf.

Excellent food!! Almost everything is available GF. My son had the GF fish and chips and lived them. I had a fish taco and my other son had shrimp tacos. Everything was delicious and fresh. Staff is friendly and our waitress was very knowledgeable about our needs.

Delicious GF fish and chips!! Make sure to try the tri-fries. Great place to stop for lunch or dinner!!

Really good french fries. Yummy portabella mushroom curry appetizer. My fish tacos were disappointing as they tasted very strongly of mayonnaise and the rice and beans were covered in a sesame dressing (made with tamari they said). Many menu items are gluten free. My husband's mana meal (described as vegetarian comfort food) was really good. I'd try this restaurant again but next time order a salad.

Stopped here on my way through town on business. Staff was very well informed and polite. They do not fry anything with gluten in their fryers. They use rice flour only for breading. I was able to order fish and chips! Very highly recommended!