My husband and I ate here on an early Sunday afternoon, so it wasn’t too busy. They initially told me they’d run out of gluten-free buns, but they found a couple. They can also make your dog with lettuce.

I believe the cashier told me that their chili is gluten-free, too. I had the Reuben dog with no cheese, which was delicious, and my husband had That Fred, a classic chili cheese dog with onions.

Their fryer is dedicated gluten-free and I believe they even warm their GF buns in a separate oven. They immediately covered my hotdog with a lid to prevent contamination once it was made.

You can also take your hotdogs to go and eat them outside in the park. I don’t think they have outdoor seating, but I could be wrong, as it might have been behind the restaurant and downstairs.

Delicious and staff is very knowledgeable. No issues and delicious hotdog!

Hole in the wall with Celiac knowledge

Everyone on the line took precautions with my order. It was brought out separately from hubby’s. Everything except chili and one other thing I forgot could be made GF. The fries are amazing. Even the ketchup was safe. I had the pimento cheese dog. I am super picky about my pimento cheese and this was delicious! The hot dog bun tasted sooooo normal! Don’t skip this place! The staff is amazing. 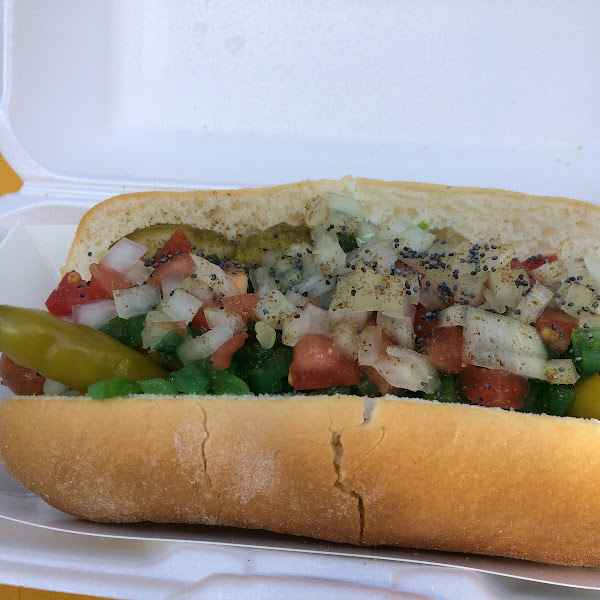 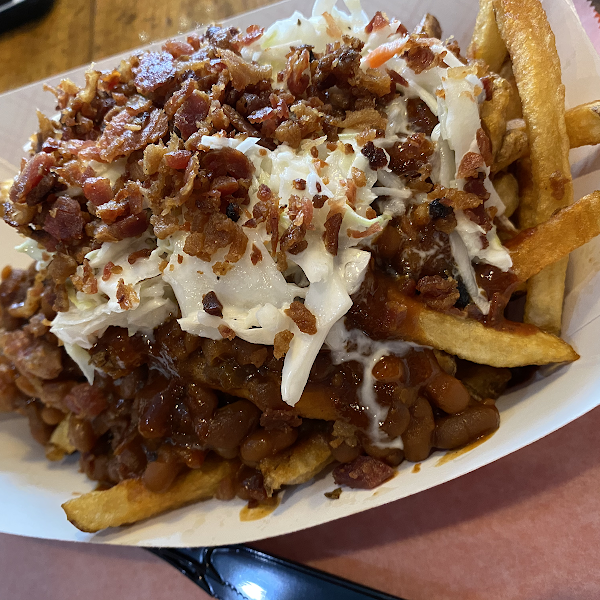 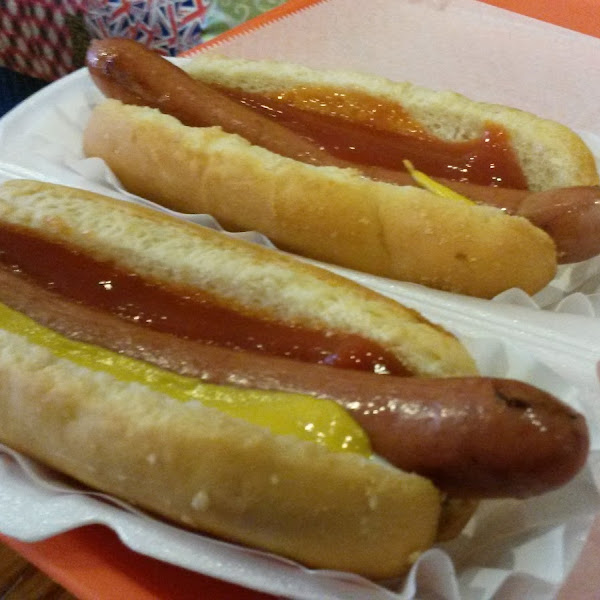 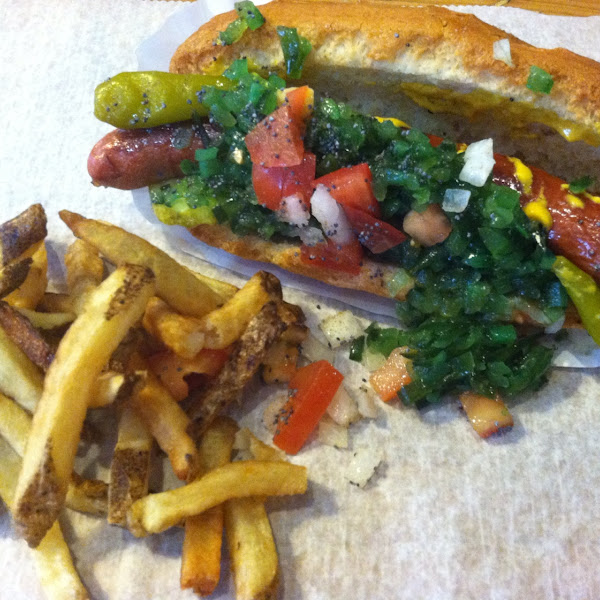 Do not skip this place! Staff is super friendly and the hot dogs are awesome! Almost every dog can be made GF. Excellent for other allergies too!

Almost every hot dog can be made gf with a gf bun. All can be made vegan. They have vegan dogs and bacon. I got the pimento cheese and bacon hot dog and it was delicious. Their fries are made in a dedicated fryer. I got the fajita frites and it was equally as good as the dog. They changed their gloves and took my allergy very seriously. Also, some of the nicest group of people I’ve experienced in a restaurant since the pandemic.

Food was fantastic and sever very knowledgeable about the gluten free options.

Delicious dogs! I had a Chicago Dog and a Godfather. Both were great! My favorite was the fries and Curry ketchup. One of the best fries I’ve had in a long time. The restaurant was not very clean, but the workers washed their hands a ton and tried to be clean.

Great Italian sausage with grilled veggies, and on a great GF bun! The staff was knowledgeable about which options were GF and which had cross contamination.

Awesome staff and delicious food! It’s hard to find an affordable and divey place to eat having Celiac. Didn’t even have to test my food with Nima to feel safe! Totally recommend!

The owner has celiac so they know their stuff. Dedicated fryer and GF buns that were good. Regular hot dogs and housemade Italian sausages are GF. Veggie dogs and bratwursts are not. I got a hot dog and some loaded fries and everything was DELICIOUS! They also have an assortment of bottled/canned beer and cider.

Wow! They made me feel so comfortable eating here! When I ordered and had questions, the cashier presented the list of what I couldn't have and it was a small list. She then told me they'd take care of me and introduced me to the manager to see if I had questions. He explained he was making my order and that the owner has celiac and they are aware of cross contamination so he'd be using different spoons and such for my order and they have dedicated fryers. The cashier even came to the table I was walking to and cleaned it again to be sure there were no crumbs left behind. The meal was so good I forgot to take a picture! The manager let me know the buns are Udi brand. I always wait 24 hours before reviewing and I have not had a reaction!!

most everything on the menu can be made gluten free, except for veggie dogs. The gluten free bun, although an addition cost, actually tasted like real bread, which I appreciated! The staff changed their gloves to make my dish and I felt safe eating here. Definitely worth a try.

Gluten free bun costs extra, staff did not change their gloves and I ended up sick. Used to love this place before my diagnosis. If you have Celiacs, proceed with caution.

I’ve been visiting Good Dog each time I am in Chatt long before my diagnosis. I can still have pretty much absolutely everything on the menu.

They ask all the right questions and I don’t mind them taking a bit longer to clean off the grill and do things the right way.

Even more helpful, they usually keep the gluten free buns on their hot dog cart that they take to local events.

The staff was very helpful in answering all of my questions about the ingredients in their sausage, hot dogs, breads, and fries. It is safe for celiacs and others with allergies and sensitivities.

While there is gluten free options, I did get sick, (the same gloves that prepared my families meals prepared mine, they didn't wipe down the grill, etc) Buns that they use are Udi's

Delicious dogs with meh GF buns. Go bunless! Wonderful attention to detail regarding both of our allergies.

So, so, so happy to eat a hot dog with a Gluten Free bun PLUS Gluten Free french fries! I wanted to cry! Plus, there was a special holder built into the table for the french fries. How cool is that! This is a super funky, eclectic, cute little restaurant.

The gluten free bun was blah like every other gluten free bun I've ever had, and a bit hard on the edge, possibly stale? So next time I'll try the lettuce wrap. The barbecue dog and godfather fries were pretty great, a bit pricey. No healthy beverage choices other than bottled water, everything else had sugar, caffeine or both. Parking on the street in front of the place was impossible but easy on the street behind it. Don't sit down and wait for a server, you order at the cash register and then they bring it to your table. Cashier was as friendly and helpful as could be. Lovely gluten free fries, very crisp!

Excellent place, super accommodating for GF. They have GF buns and their fries are also GF. They were very careful when preparing out food to avoid cross contamination. Just tell them you need a complete GF meal.

The meat-free dog they carry is not GF, in case any other vegetarian was wondering. :/

Food is delicious! GF Fries and amazing hot dogs with gf bun. Very helpful and understanding staff. Made my son's day that he was able to eat the same thing as us!

Very knowledgeable owner who has gluten intolerance himself. They were very friendly and helpful! Great casual environment. My celiac husband was very happy to eat hot dogs again!

We were starving after a long day at the aquarium. I'm gluten, dairy & corn free and I had a great lunch! They even had a great gluten free beer!!!

Dedicated area for gluten free! I've never been gluten hit and their menu is DIVERSE and tasty!!!!!!!

These hotdogs were so good we went twice! The use gluten free hotdog buns-- not bagels like stated in previous reviews. The fries are gluten free. They ask if you have an allergy and they take special care of people with celiac.

This place is Awesome! The dogs are yummy and the staff is extremely helpful when it comes to which items on the menu are gluten free! They even toast your bun in a separate toaster. My bun was perfect and not dry at all. Also the fries are gluten free as well and not fried with anything else. I was impressed and plan on going back on our next trip.

A majority of the menu items are gluten free and the hotdogs are all beef and cased in house. They were very cautious of cross-gluten contaminants. Fries were super yummy!

I enjoyed my dog. The GF bun was a bit dry but the toppings and choices were good. Fries are even GF. Prices are low too!

great food im a fun environment. they use a gluten bagel instead of a bun which is a little tricky to eat but tasted great. i would defiantly eat at the good dog again.

No dedicated menu but the staff was pretty knowledgable about all the various GF options. Hot dog was decent... The relish is outrageously green!!! The fries are good. The meal frites look good. My husband and mom had them and thought they were good. As the other review said, the GF bagel for my dog was a little weird, but still decent. I would go back, but I would try the meal frites instead.

Really helpful staff and incredibly yummy food! The guy who took our order has twins who have Celiac so I felt really comfortable. I got the Chicago dog served on an Udi's bagel and my husband had the GD salad and we shared fries. The atmosphere is cool as well and we had fun just taking in the decor.

What a fun, funky place to eat! It was my first time to eat a hot dog at a restaurant since being diagnosed with Celiac Disease. The waiter told me his twun daughters have Celiac and was very empathetic and accomodating with all my questions. The dogs are all beef and are made at the restaurant, as are the many ketchup options. The maynaisse with red wine vinagerette was a hit. The fries are prepared in a dedicated fryer...what a treat! The buns are Udi's bagels. I'm not sure why they don't use the Udi's hot dog buns. I can't wait till my next visit to the area. It was a tastey, but inexpensive way to eat out!

They use a udi's bagel as the bun, an all their fries are GF!