Gluten free menu but limited to appetizers, salads and bunless burgers. No main entrees. No problem! I had the spinach salad, steamed shrimp and chicken w honey mustard appetizer. It was enough for 2 meals! The servers and bartenders were great!

Based on the other reviews I headed over to Hannah’s. The outdoor seating was nice. The staff was not. The lady at the front had an attitude and it seemed like we were bothering her as she put us on the list and then walked us to the table. I asked her for a gluten free menu and she rolled her eyes as she told me the items were marked on the menu. The waiter was quiet, could barely hear him. One thing on the menu was gluten free. The crab pizza. I got it. It’s crab dip on a pizza crust covered in shredded cheddar. I pulled the cheddar off and didn’t get poisoned. Go if you want to sit out by the water and see boats. Don’t go for the food. 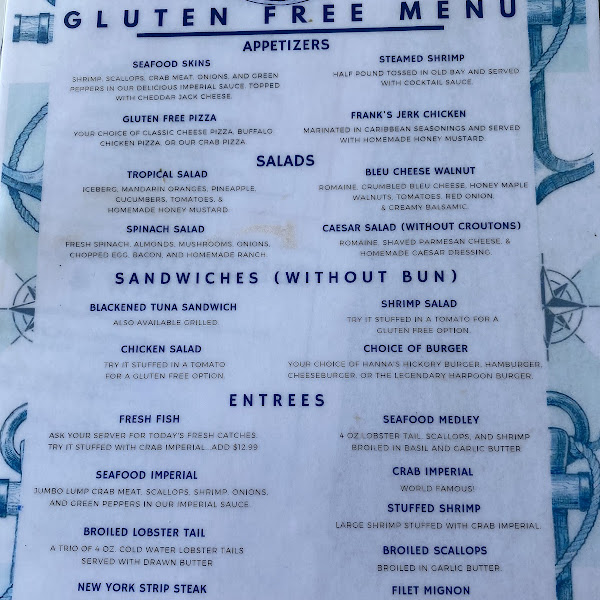 Told 10-15 wait, actually nearly an hour. Online menu looked promising, but were told they were out of gf menus, so if we told her what we were interested in she would ask. We told her we’d look at the menu on the website, she wasn’t aware there was an online menu. She came back after taking our order and said several of the items on gf menu are not actually gf. She came back and forth between us and the kitchen 3 times before settling on an item that was “probably ok”. We asked to have a baked potato because none of the lunch sides were gf, waitress said no, because even though they were currently serving dinner at that time, we had arrived 10 minutes before dinner started and couldn’t get a potato because they’re not on the lunch menu. I asked why they couldn’t charge us for a potato that was being served to someone at the next table, she said “because you’re here for lunch”. Not even an attempt to be accommodating. My husband and daughter both got sick

Separate gf menu...lots of options. I had salmon....delicious! I did not get sick!

I asked for a GF menu and they brought out a piece of paper that had everything I could eat! Large selection and delicious! No issues:)

If you ask your server, they have a print out of all the menu items you can have gluten free. Including stuffed shrimp! So yummy! The waitress was very nice and helpful.