Everything is gluten free! Eaten here 4 times in the past 2 weeks and every taco has been delicious and not made me sick!

The tacos are very generous and crazy tasty. Could eat these every day.

The staff was quite proud of their rating on this app and assured me I could order freely off the menu. They only have tacos. Authentic, not US tacos, really really good. I had lengua, cachete, asada, and veggie. The lengua was the best to me. Great salsas. Add onion and cilantro mix. Delish

This place is a hidden gem! The cashier had no clue about the menu/ingredients but I was able to confirm with the cooks that nothing was marinated in soy/contained gluten. Delicious street tacos. We will be back! 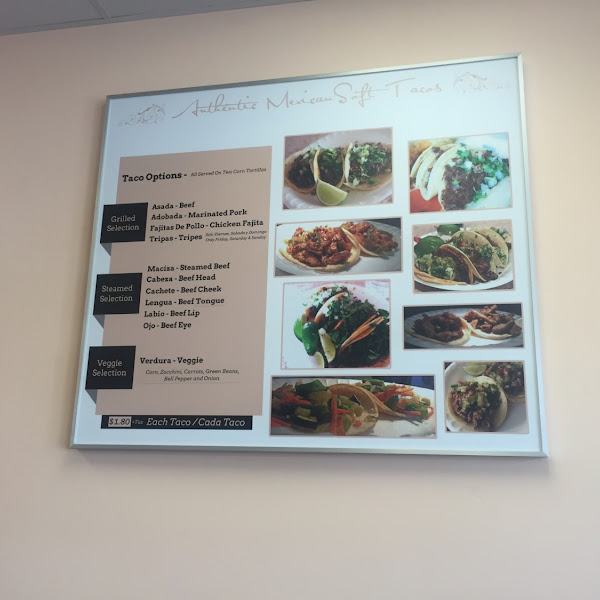 The veggie tacos are surprisingly good, a handy way to get some vegetable servings in. I like to get one each of grilled steak, pork, chicken, and veggie. Delicious tacos and the whole place is gluten free. :)

As fats as I can tell the whole menu looks GF. Delicious!

Yum!! Entirely gluten free. Seems like a secret gluten free place we happened upon. Street tacos and a salsa bar. That’s it! I had the asada, chicken, and pork. Chicken was probably my favorite but they were all very good. Salsa bar was hard to determine which ones were spicy and which ones were mild, wish those were labeled. Small price to pay for safe gf food. Enjoy!

I don’t think they sell anything glutinous. Probably the best priced GF food in all of SB. Street tacos with ample meat. Order a side of grilled onions to share and try the great spicy salsa from the salsa bar. All authentic with options like tongue and eyeball for the the more adventurous. Awesome find!

Super delicious! Entire place is gluten free and the taste is fresh, juicy, authentic, 100% delicious street tacos! And super inexpensive and fast. Will come back EVERYtime I’m back in Santa Barbara!

This place is perfect for GF. Inexpensive, fast, and delicious

Love that the whole Place is gluten free and no one would even know. Salsa was good as well

The entire place is Gf and delicious. Pork tacos were my favorite!

We ate at Lilly's Taqueria three times while visiting Goleta and the lower Central Coast and experienced no symptoms of gluten contamination. First I tried the beef, which was tasty but a little dry until I doctored it with juice from a lime wedge and some salsa. My husband liked the beef taco with his veggie taco, which contains corn, squash, green beans, carrot, and bell pepper (the latter doesn't agree with me). On my second visit, I tried the "fajita chicken," which is mostly tasty (sauteed?) onions, but I can't eat that many onions. So, I asked about the pork, which doesn't contain onions, and learned that the salsa table also contains plain, fresh cilantro without onions. The fresh cilantro made the pork and beef tacos even better. All the salsas are delicious (and GF, too), but I like the green salsa the best.

This place was great. They only serve tacos ($1.70 each) with gluten free corn tortillas. None of the fillings, sauces, or toppings have wheat. There just is no wheat in the place. We had the beef, pork and veggie tacos. They have a counter where you can add the sauce - mild to hot, radishes, cilantro, etc. Lots of comfortable seating.

My Order was up as soon as I paid. It's great tacos.. Closest to Baja around! They use gluten free everything and that comes naturally as they use corn tortillas. Great place and happy people. Busy but no wait!

Lilly's is an authentic Mexican taqueria with everything homemade with fresh ingredients and no gluten added sauces/marinades and only corn tortillas. They cook only tacos (less than $2 each!!), no sides or anything else, but wow, those tacos are good! Their salsas are excellent, btw. I highly recommend this place.