Great BBQ options with different types of sauces. Meats and sauces are all gf. Cole slaw was made with a vinegar dressing but waa gf too. Remind them when you order that you can't have the hush puppiea. They are added to every plate.

No real effort made to accommodate GF. Too bad.

Didn’t get sick, did get disappointed by some of the limitations on the menu and the overall quality—not the best. 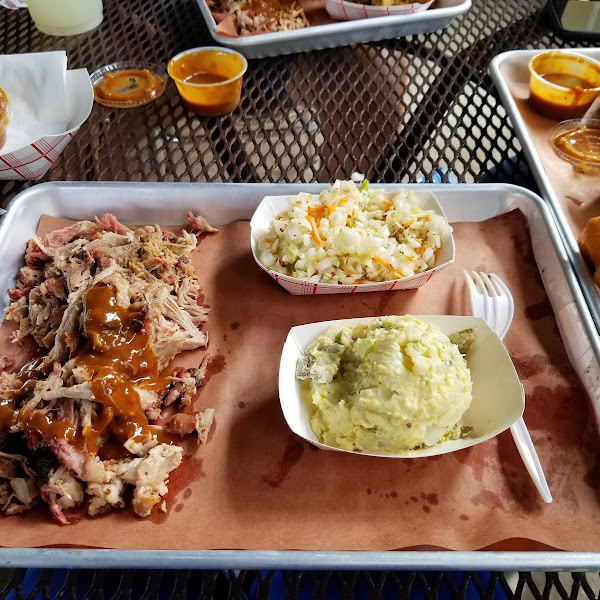 Did fine eating here, it wasn’t the best bbq ever but it was good. Lots of meat options and a few sides available gluten free. The menu system is strange, I was given a regular menu and a laminated printer paper allergen list menu. I had to go back and forth a lot to figure out what to order. They were weird about ordering more then 3 ribs. They did have a note on the allergen menu to tell your waiter if you have Celiac so the staff changes gloves. The waitress looked at me like I was nuts when I did that. The gluten eating part of my group loved the hush puppies but they don’t make those gluten free. Nothing from the fryer was safe to eat for me.

Very knowledgeable on gluten sensitivity and dietary restrictions in general. Seemingly one of the best with respect to that! Their food on the other hand I found to be just ok. The turkey was too dry, the chicken was more dark meat than I’m used to (almost entirely), and the brisket was burnt. The bbq sauce on the brisket was very tasty though. Moe’s original bbq has much better food in my opinion, but they don’t seem to be nearly as knowledgeable about dietary issues.

Waitress I always get is very aware of celiac. No reactions. Good food.

I went here because of the reviews on here but did not have the same experience. I told our server I have celiac disease and he went through the menu with me and told me what I could have. I ended up getting pulled pork with a side of cucumber tomato salad. I ate my salad and when I got to the bottom of it, I found a macaroni noodle. I told our server and he did not seem concerned at all. I told him this could make me very sick and he did nothing. Definitely be careful here.

Staff was knowledgeable and helpful. Food was amazing.

AWESOME informative menu helped us order all fully GF foods and not guess. Was so yummy and quick. Great service. Just a note - the straws are all made from plants and are compostable. Not ingredients or which “plants” so we just avoided.

Great food. List of items containing gluten was super helpful. Waitress knew not to include hushpuppies on my plate.

Stopped here for bar-b-que based on the reviews I read here. It lived up and and exceeded expectations. The server was very aware and brought me a separate print out of the menu with dietary information. She also assured me that the kitchen would be changing gloves and knew how to properly handle celiac. It’s such a joy to be able to eat out without worry and no reaction!! Would highly recommend

Waitstaff extremely knowledgeable, almost entire menu GF. Outstanding BBQ and sides. I am so picky about BBQ that I rarely like it, but this place is top notch. Ribs and chopped pork are best choices.

Luellas catered our rehearsal dinner. Everything was delicious and the staff was kind and helpful. Their chicken and pork BBQ is divine and lots of gf sides too. We would totally use their services again.

These folks were so kind!! The chef came out to tell me he had changed gloves personally with my order. They really took care of me! And the brisket was out of this world! I wish I lived in Asheville so I could go to Luella's all the time. :)

This place was so good... they really understand gluten free cooking and separate the GF from the non in the kitchen. All of the meats and sauces are GF and delicious! Definitely recommend.

Food was awesome and server was very knowledgeable about gluten-free options. Lots of delicious options!

Great service, knowledgeable about everything on the menu. The server knew what was safe and what would not be safe for someone with celiac disease. Amazing bbq and ribs to die for. Very sensitive and have not had even a slight issue with the food here. One of my favorite places in Asheville. A must stop for great food.

When you order, say you need it GF and they won't put any hushpuppies or bread on your plate. Most of the sides are GF. I have Celiac and have had no problems there.

waiter was very knowledgeable about which menu items were safe, and the good news is that many of them were. delicious meal!

In my opinion, Luella's has the best ribs in Western North Carolinal. The rub used on the ribs and the barbecue sauces are gluten-free with plenty of gluten-free ides to choose from. The staff are friendlly and accomodating to those with celiac disease Luella's is my favorite restaurant in Asheville.

Delicious food! A lot of options for plates. Awesome sauces. And the service and atmosphere was fantastic! I sat at the bar alone and made lots of friends, not to mention the bartender was super friendly and talkative. I had a lb of ribs and some collard greens and left with leftovers. Ask to see the disco pig if you can. It's pretty sweet.

I have celiac and I'm also a vegetarian so finding a decent barbecue place is pretty tough. I was pleasantly surprised with Luella's - The staff was great and there were actually options for me to eat.