I never really write comments but honestly this place has been amazing!!! I’ve stayed in the keys for an entire month and went at least 15 times!! The gluten free pancakes and French toast are amazing!!! Also they have amazing gf wraps! The owner Mike is super nice and his staff is well trained!

I got a cuban in a gf wrap and it was amazing. The owner Mike is super knowledgeable and very nice! My food was cooked separately and they even baked me some tater tots since the others are fried with gluten items. Most of the menu can be made gf! They also had gf French toast made with coconut or almond bread that looked really good. We will be back!

I was hoping for the hot cakes everyone raves about but they had soy oil in the ingredients and I’m allergic to soy. I had their gluten free French toast with fresh berries and it was awesome! Husband (not gluten free) had a huge omelet that he said was awesome too. Very happy we stopped at Mangrove Mike’s for breakfast.

Updated 7 months ago read full review
This establishment is NOT a dedicated gluten-free facility and may not be safe for those with celiac disease. Please contact the establishment directly to inquire about safety precautions. 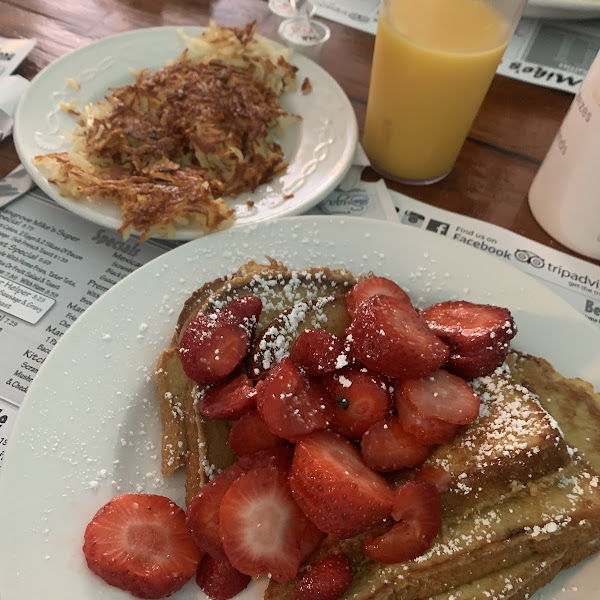 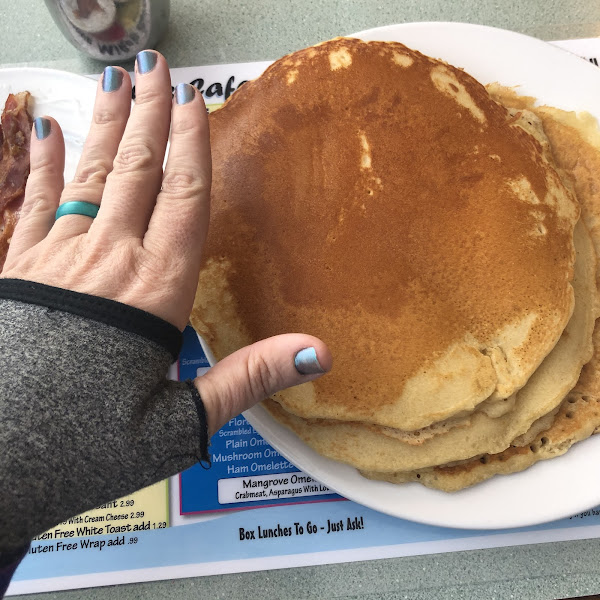 I had the GF hot cakes and they were huge and delicious! Food was quick and the rest of the family loved their (non GF) lunch. Highly recommend

My wife has celiac disease, so we went here due to the many advertised gluten free options. Although the menu was conveniently marked, it didn’t translate to staff training. Our server’s initially friendly demeanor somewhat dropped at the mention of gluten free, and seemed to think gluten referred to salt and cheese, among other erroneous things (understandable for a lay person, but not great for a server at a restaurant which caters to gluten free customers). We ordered the gluten free pancakes which were good, and the almond French toast which had the consistency of soggy oatmeal. Our server flatly said the tater tots cannot be baked, and when we tried to verify our items were the gluten free varieties when dropped off at the table, the staff member shrugged and said “that’s what the ticket said.” When later asked how we liked the French toast, we politely said the texture was a little soggy, and were then confidently informed that that’s standard for gluten free fare. Mind you, this is coming from a person what thinks gluten has something to do with salt and/or cheese, and to a couple that have eaten gluten free for six years. Without us asking, they did take the French toast off the bill, which was nice, but overall it wasn’t a good experience.

This place is a gem for both Celiacs and the families who love them. Great breakfast, knowledgeable staff. Worth the wait if there is a line (and they move things along quickly). Came here every morning for 7 days straight. Highly recommend the GF pancakes.

celiac is the new black
Celiac

We ate at Mangrove Mikes twice while staying in the Keys. We went there because they offer gluten free options and I have celiac disease. The main gf fare they have is French toast and gf pancakes.

The first time I ordered the gf French toast with coconut bread. (They have the choice of almond or coconut and I am allergic to almonds) The texture of the bread was less than desirable. I couldn’t eat it. It may just have been me. I live in Portland, Oregon and we have pretty stellar gluten free bakeries there, so I am accustomed to better.

We gave them another try today and I ordered the pancakes. The server asked if I wanted 2 or 3 and I said 3, since pretty much everything gluten free is smaller. Wowza. They were huge and delicious, which redeemed the restaurant in my eyes.

Our server also made sure that my items were cooked separately, away from other food. I so appreciate being able to eat safely.

Once caveat. They are offering wheat straws in place of plastic. They are labeled gluten free, but as a celiac I don’t take those types of chances. The risk of cross contamination is too high. Luckily, I caught that it wasn’t a typical straw before I used it. I feel that they should ask if you want one, as wheat is also one of the top allergens. I would hate for someone to get anaphylaxis from their straw.

GF pancakes and French toast are amazing! Cooked separately. Have never had a reaction here.

Decent. Stated they cooked the food separately. Didnt have any immediate reaction. So far so good GF pancakes, GF bread.

Celiac daughter has GF hot cakes with strawberries and they were a hit. Staff was knowledgeable and very accommodating to the GF needs. No sickness afterward. The rest of us enjoyed a great breakfast as well!

Gluten free options on menu including gf pancakes and french toast. I haven’t had french toast in almost 6 years!! And the staff was welcoming and friendly. Do not pass by!! Stop in and enjoy!!!

Waitress asked if I had an allergy or sensitivity. It was a thoughtful question because they are very aware of cross-contamination. Gluten free toast with the combo berries was good & very filling!

STOP HERE!!!! The staff was so helpful and nice. The did not always know the answer if GF so the waitstaff brought out the ingredients lust in a product. I had a pancake in side which I recommend getting and I custom ordered a lobster Benedict in gf toast with lobster and Swiss cheese. I was not sure if hollandaise had gluten as I read the ingredients as they have a mix so I did not get it. The lobster was plentiful and worth the money. However I wish I got the lobster omelette that my husband got. It was filled with soooo much lobster. Both of these were on special. This breakfast was so filling we did not eat until 6 for dinner. Also check out gift shop connected to mangrove mikes’s too.

Everyone was friendly, gluten free options on the regular menu and knowledgeable waitress who asked if it was an allergy or preference. Fantastic French toast, going back tomorrow for the pancakes!

Stopped here on our way home from Key West. The waitress was friendly, and very helpful! GF French toast was amazing! Unfortunately they just switched their straws, which are hay based on NOT gluten free friendly. Found this out the hard way. Tater tots were fried, after I was told they’d be baked and the waitress came back 5 minutes later asking how many I had. Great food, lack of attention to detail.

Staff were knowledgeable of gf. Had lunch (blt) and it was delicious. Next morning stopped for breakfast on way to Key West. I had gf pancakes, scrambled eggs, & bacon. Food was good. It was a little “greasy” for me but I’m picky about that. I did not have a reaction either time i ate there. Staff were friendly.

Gluten free options on the menu- allergy alert was clearly printed on my receipt. I had an omelette with fruit and gluten free bread and it was delicious! I am super sensitive and felt comfortable eating here.

Pancakes are great and so are the wraps :)

great choice of GF breakfast here :) I ordered the French toast on gluten free bread and I look forward to going again and trying their pancakes

GF pancakes, GF French toast, GF wraps and GF sandwich. All thumbs up from 4 of us with celiac! Our waitress was extremely knowledgeable and willing to check the gyro meat (it had wheat 😕). They pointed out that the tater tots could be baked. We ventured here from Key Largo where we had a very difficult time finding things to eat.

No reactions from even the most sensitive celiac in our group 😊.

Yummy fresh food! Great coffee and gluten free toast, wraps and pancakes! Love the atmosphere and the service was friendly and vet efficient 😀 They understood gluten free! Will definitely be back ❤

We enjoyed this place. Food was good. Friendly service. Seemed aware of gluten and very concerned. However, after we determined that fries go in a fryer with only fries and tots, and I'm a few bites in, server came and asked me how I can eat fries if I'm gf! I did not get sick but have me a little scare.

Drove down to Key West for an impromptu birthday celebration and stumbled upon Mangrove Mike's using this app. I was pleasantly surprised to have the chance to eat gluten free pancakes, tater tots, and toast! The tots were the big sell for me because I have not been able to eat those since being diagnosed. Atmosphere was eclectic and perfectly suited for the area. My food can put hot, fast and tasty and no problems digesting. Highly recommended and we may even stop there again on our way off the Key!

Nice and relaxed place, looks like an old fashioned diner with pictures of fishing and fish everywhere you look. Unfortunately they were out of gf hot cakes, so I ordered the California wrap with chicken, bacon, cheese and avocado with fruit as a side dish. It was delicious!

Have eaten here twice, and both times, had great service, although, the second time, I wanted gf hotcakes, and they were out, but offered to make French toast or of the gf toast! great service with a smile!! Make sure you check it out!!

This place is outstanding! They have gluten free bread, wraps, French toast and pancakes. The wraps are delicious. I had the Premium Morning Oatmeal today and it was superb! The staff is friendly and knowledgeable. This place is always busy, so there may be a wait but it's totally worth it.