At the Shoppes at Mandalay Place

We tried to order a gluten free pizza and were told that they have a dedicated oven. The manager came out and informed is that when they are busy they use the dedicated oven for regular pizza and that there is not a separate prep area. He also said that he wish people would stop recommending his establishment to people who have celiac because it’s not safe and he does not want incorrect information being shared.

Our server was Cheyenne and she was excellent. She went over and above any server anywhere I’ve eaten since eating gf/df. Lots of vegan options if you need them too. I got a gf/vegan pizza and it was really good. I’d definitely eat there again if I’m in Vegas and in the area.

It’s just an udis crust. However they do have gluten free beer which is very hard to find in Vegas 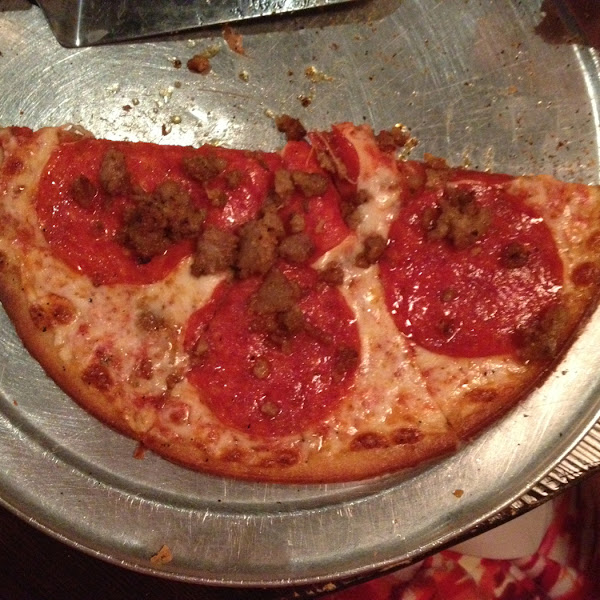 Totally rude and unprofessional. The staff is not cohesive, and lacks customer service skills. The food is not safe for Celiac, and they are very clear that they do not take any precaution for contamination for their gluten free food.

Not celiac friendly and service was rude. We called ahead to see if we could get a table and for details on how they prep the food, everything sounded great but when we actually got to the front they told us something completely different and that their “deli had no idea what was really happening”. They have separate ovens but when they are really busy they use the gluten free dedicated oven and “too much contamination”. Appreciate the honesty just wish they were a little more professional about the gluten free advice.

Staff are very clear that there is a high likelihood of cross contamination but they do have a GF pizza base. I did have a reaction to it.

John A.
Not celiac

Food and service was fantastic. They offer a gluten free pizza, but the kitchen isn't GF so tread cautiously. I didn't have any problems with my food.

The staff is very honest that they aren't careful about cross contamination so that was pretty disappointing. I took a risk and the pizza tastes great and I didn't feel any reaction.

I was really looking forward to trying this restaurant, as their website mentions having gluten-free options several times, and they have a big sign advertising GLUTEN-FREE at the hostess desk. Unfortunately, when we got there, I was informed by the server that they actually take ZERO precautions against possible cross contact with gluten. He said it is absolutely NOT safe for Celiacs. Grateful that the server was honest, just bummed that we had traveled all the way to Mandalay Bay for nothing. :-(

Restaurant can make many things gluten free, but we were told they cannot prevent cross contamination and advised us not to dine there if celiac. I appreciate the knowledge and the honesty, and wanted to pass on the info for other Celiac's out there. (Since we didn't actually eat there, I can't comment on the food).

Pizza was amazing and the server helped me immensely. Also had gf beer!

Great place. The burgers can all be made gluten-free and are to die for. The pizza can also be made gluten free, but the crust was pretty meh. Fries are done in a dedicated fryer but we were told that "onion rings fell in too". My burger was absolutely decadent, however I could not have the fries and I had no interest in the gluten free pizza after the first bite.

Lots of GF pizza options. They also have GF buns and GF pasta. staff is very nice. pizza was good.

Overall a great experience - I did not get sick or have any symptoms in the days after eating here. Between the two of us we split a GF il Mangino pizza and a Slice Burger. The pizza was a good crispy thin crust. The burger was on an Udis gluten free bun and was also good. Be sure to order fries on the side (and for someone else) as after asking the server, I was informed that they have a shared fryer - I admittedly snuck a couple off the plate though... Just had to :) .

We could tell that the server wasn't 100% sure on any of the GF related questions we asked, but he was quick to go find and answer and get back to us in a timely manner.

It was a little pricey but would definitely go back if I was going to be on the south side of the strip.

The menu is a little unclear. There are notices that they carry gluten-free crust and 2 different kinds of GF pasta, but the server was not at all knowledge as to what kind of toppings I could safely eat. He didn't know if the buffalo sauce or ranch were GF, and had no idea that the whiskey sour cream was a big no-no. I played it safe with a pizza whose ingredients appeared to be likely GF, and I did fine. The chicken on the BBQ pizza was bland by itself and there wasn't enough pineapple on the Hawaii 5-0, but the GF crust was good, the pizza was overall quite good, and it was a satisfying meal.

Great experience here. Had the basil pasta with a salad and it was delicious! Pasta was fresh, unlike some restaurants where the pasta is either chewy or crunchy! The waitress was a knowledgeable about what sauces were gluten free or not, so I was very confident eating here.

So nice to have creative pizzas and not the standard cheese and pepperoni frozen pizzas. BBQ chicken pizza here was awesome!

This was fantastic!!! Seriously the best GF pizza I've ever had. I ordered the il mangino pizza and, wow, it was ridiculously delicious! I ate way too much, but it was so worth it. The crust was so good and the topping combination was exceptional. I've been craving it ever since. Our waitress was super friendly and she made sure it was all gluten free. They had a wide selection of beverages as well. I just got a glass of wine, but there was a bacon infused Bloody Mary that sounded fantastic. They also had 2 types of gluten free pasta that could be paired with most of their sauces. I didn't order the pasta, but it seemed like they were able to ensure that anything I ordered would not be contaminated. So good!

I ordered gf and stated GLUTEN FREE at least twice. After enjoying the quite tasty thin crust pizza, I examined the bill. Guess what?? NOT GLUTEN FREE!!!

I cannot recommend this place to anyone based on my experience. Sick, sick, sick! :-(

Was told by waiter that gf pasta was cooked in same water as other pasta and pizza was cooked in same oven without a pan. We walked out. This was after hostess explained all about how careful they were in back about cross contamination. Talked to her on the way out and she said she was told there were separate areas. Waiter came up and said no there wasn't. No way I was risking eating there. Whatever the case is they need to get their act together. I went off previous reviews and was excited to try it out. Scared to even think about eating there now.

Great pizza! GF option isn't on the menu, but they have it. Located in the Mandalay Bay shops. Had several ciders and beers to choose from. A little pricey, but worth it!