Smoke on the Water

They have gluten-free buns that are supposedly kept separate. These people really have no idea about celiac so if you are, don’t bother. They told me the chips are gluten-free, when I got it and they were all together in the same container. I tried a chip and thought about it after, that they are probably fried in the same oil as the fries. I also second guessed the bun they gave me, it looked way to soft and looked like legit bread. I went back in to question it and the girl insisted that the bun was gf. She then tells me that the “GF” chips are fried in the same oil as the fries that have a gluten coating. When they took my sandwich back to replace it, I really don’t think they replaced the meat. When I got it back, the bun was definitely not the same. Regardless, I am terribly sick and will never go back here. Their foods also not great, the meat is SUPER dry.

Staff was very knowledgeable about gluten-free! I felt at ease. All the BBQ sauces are gluten free. I got a rib and wing platter so I’m not sure if they had buns or not. Staff was happy to confirm salad dressings were gluten free as well. Overall great experience! Food was very tasty!

Excellent food, really nice place! Gluten free menu and the server was knowledgeable about preventing cross contamination. I would definitely stop here again if in the area. 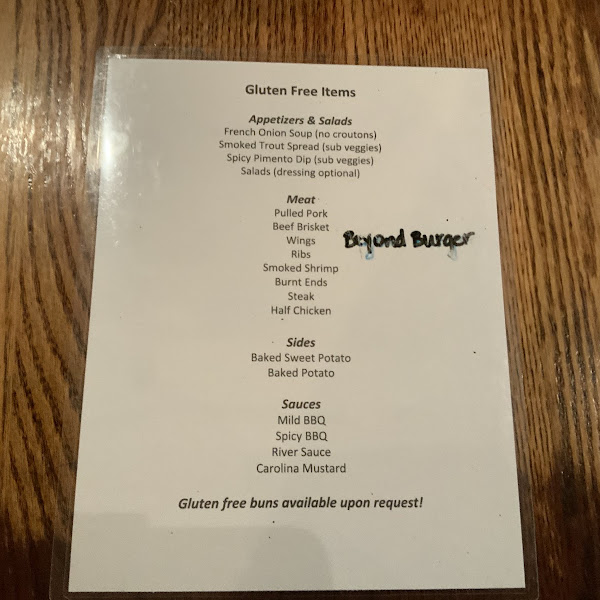 I loved it! They had an entire gluten free menu and the staff was very knowledgeable and patient with me. I was able to eat and not feel deprived whatsoever. Wonderful food all around