Cupcakes and cookies are delicious. I eat at the BHills location all the time and have never been sick. It’s a must to let them know you have allergy to gluten. I have Celiac so I tell them but, they know it as gluten allergy. Make sure they change their gloves and get yours from the back to avoid cross contamination! I eat these too often and I never get sick 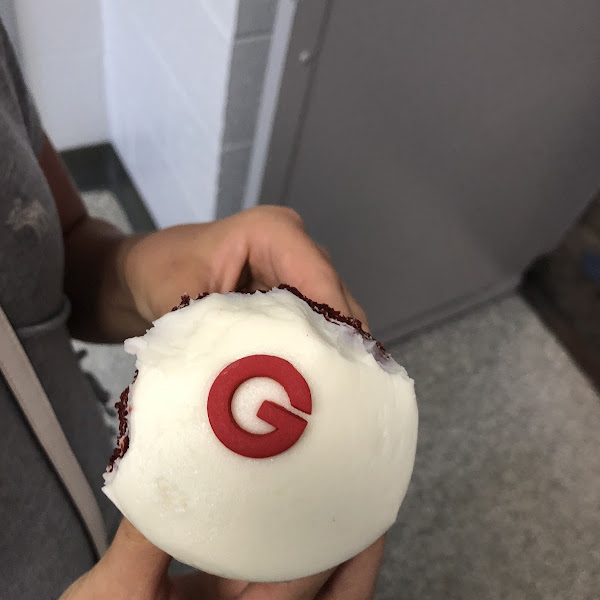 Not for celiacs. Too bad. If you're a fad dieter, enjoy yourself.

They have GF red velvet and chocolate chips cookie. Only tasted the red velvet cupcake, but I went back and bought four more! So this was gooooood!

Only red velvet is gf

The GF cupcakes are not celiac friendly nor are they intolerance friendly. They are baked in a kitchen with cross contamination and while I’m not celiac, I do have an intolerance and I got extremely ill after eating their lemon blueberry cupcake which was labeled as gluten free.

The gluten free red velvet cupcake is the most delicious cupcake ever! Love it!

I loved Sprinkles before I knew I have celiac. Went for the first time post diagnosis and while they make the cupcakes in a shared kitchen, they do prepare the GF ones in a different part of the kitchen, store them on the top shelf of the display, and assured me they change gloves. Not many options, but there were two today! Haven’t tried it yet, but feeling optimistic. Update: did not get sick last time, but have since not felt comfortable getting them again due to being right next to the vegan cupcakes and being informed they are not prepared separately from glutinous cupcakes.

not celiac safe. everything is made on shared equipment

They had 3 different kinds of GF cupcakes and some GF cookies. Got a huge GF cookie. It was amazing!

So moist & yummy! Have had them several times and never had an issue

Delicious 😍 they need the gf cupcakes in the same case as the regular but ive never had an issue... They only have red velvet and lemon blueberry but the red velvet is amazing 😍😍

The gluten free red velvet is amazing. And if it’s after hours you can use the cupcake ATM

Red velvet cupcake was yummy! Said they do take allergy concerns seriously , but there is no guarantee. Decided to try it, cleark was very nice changed hes gloves and got me a fresh cupcake from the back.

The cupcakes are delicious but as noted by others there are few choices. If you have multiple food intolerance, there are no options. Staff did not seem knowledgeable or understanding that ingredient could be important past gluten.

The GF chocolate chip cookie, lemon blueberry cupcake, and red velvet cupcakes are all amazing! Possibly the best GF cupcakes I’ve tried yet — not dry at all. Prices are high but in line with non-GF prices.

They are not celiac safe. They use the same equipment as non gluten free and it’s all stored in the same place. If you have a gluten allergy or Celiac I would not go there

I had a red velvet cupcake the first day we were there, then a cc cookie out of the atm on the second day. Both were amazing!! I know everything is kept in the same case, but I’m super sensitive to gluten, and I didn’t get sick!

Went to the store in Downtown LA (7th & Fig shopping center). They had GF red velvet and blueberry lemon as well as a chocolate chip cookie. They were in the same case as the gluten but on the top shelf. Sadly the Vegan cupcake was just next to the GF ones, so high chance of cross-contamination. I do not have celiac (my kids do) and I am GF for health reasons. I just ate the red velvet cake and it is very delicious, except for the tooth-breaking "G" on top, which was very, very crunchy and not good. It has not been ingested long enough to see if I have had contact w/ gluten, but I am writing a review because it is delicious and it was so exciting to see GF in the store! One star off because the server used the same glove for my cupcakes as for my friend's gluten one, and because they're in the same case next to gluten. I would not buy my kids cupcakes at this store, too risky.

The cupcakes are good but be aware there arent many options when my husband and I got there there were only 2 gf cupcake options (red velvet and lemon blueberry).

While cupcakes were in same case as other cupcakes they were on the top shelf and in a separate area. Loved the red velvet cupcake.

Best GF red velvet cupcake I have ever had! It was so moist and the cream cheese frosting was amazing. They cannot guarantee there isn’t any cross contamination but assured me they are made in their own trays and space. Best part is I didn’t get sick. 😁

They have a small printed sign that their kitchen that they make GF cupcakes in are not gluten free. While the GF cupcakes are not touching other cupcakes, they are still stored adjacent in the same space and it’s very possible small crumbs travel in the space. Cupcakes themselves are very very delicious. I am non-celiac, with wheat allergy (+more), and I had a mild reaction from eating their cupcakes, which may or may not be due to wheat.

I went in and asked about the process they used to make their Gluten free products. The gentleman brought out an allergy book of all ingredients and could not guarantee me that no cross contamination takes place which made sense to me after I looked in the case where they kept the baked goods. The GF baked goods are kept in the same case as the non-GF. I did not dare to try it. For those without Celiac it looked and had great choices.

Amazing cupcakes, I love them. There two different kind of GF cupcakes.

Gluten free cupcakes kept in the same case as gluten cupcakes. Would not risk it.

The gf items are clearly labeled and delicious at that! We have eaten here at least 3 times and never had issues.

Was in town for our vowel renewal and ordered our wedding cake from Sprinkles. The cake was perfect, super moist, delicious frosting and looked great. I ate quite a bit of cake and didn’t have any issues at all. Highly recommend!

They have the best gluten free red velvet cupcakes i've ever had and also have really good gf chocolate chip cookies. 10/10!!!!

The cupcakes were nice and there were gluten free red-velvet and blueberry lemon cupcakes and a good gluten-free chocolate chip cookie.

Literally the BEST cupcakes I’ve ever had. There’s two GF options (lemon blueberry and red velvet) at least when I went. Definitely recommend. No issues (celiac)

Went in late night and all they had left was lemon blueberry, which made me happy! Real blueberries in the cupcake and not too sweet. Only fault is that there is too much of the lovely icing.

Had the red velvet gf cupcake and gf chocolate chip cookie... Amazing! Couldn't even tell it was gf!

Had the GF red velvet cupcake, and it was delicious! Kept separate from the other items and I didn’t get sick :)

I have celiac disease and even the slightest cross contamination can leave me in an abundance of pain for weeks. I walk into the small cupcake shop and asked for any gluten free options available. The woman quickly stated "no we have no gluten free cupcakes". Astounded, I looked at my mom and sister confused because I found this place under this gluten free app (which I always use !). So I just told my sister to get any cupcake she wanted and I'll get something sweet somewhere else. The entire time this lady is watching me conversate amoungst my sister and hearing how dissapointed I was. My mother then asked again if there was anything gluten free, in which the lady finally said "yes there is in the back" as her employees began to fill the front desk from the back of the bakery. As we all looked at each other confused I asked for 1 gluten free cupcake as she puts 1 glove on grunting. I was completely weirded out, as I knew this was my worst nightmare to ever happen publicly. I was being discrimated against. She seemed to not want to serve me at all and did not inform me of the ways she would carefull prepare my cupcake away from the others, she also didn't inform me if there were any other flavors or even if how they were made! Either way, even if she did not want to serve me, the fact that she could not provide such valuable information to a person with celiac disease and seeing just the "normal gluten cupcakes displayed" gave me a sickening feeling of being completely terrified that somehow/someway I am going to get sick.if you have celiac, I would not recommend since these regular/gluten free cupcake are made fresh DAILY. With the chances of flour flying around everywhere and not having a completely dedicated area for us Celiac's.

Tasted great but was sick within 20 minutes

3 options: GF red velvet cake, GF flourless chocolate cupcake, and chocolate chip cookie. We tried the red velvet and it was moist and delicious. When we ordered it, they changed gloves, got a fresh one from the back, and boxed it separately.

The GF red velvet cupcakes are AMAZING! I believe those are the only GF cupcake, but I think the have GF cookies and ice cream.

The GF red velvet cup cakes are fantastic!!! Moist and soft even several hours later. Easy to order (no 72 hour notice required here). They kept them separate from the other products.

They only offer one gluten free cupcake flavor, red velvet with cream cheese frosting, but it was amazing

Was leery since not a dedicated kitchen but found it celiac safe. Separate cooking bowls pans etc. and they keep GF goods in the back separate from gluten products. Server happy to change gloves before selecting our FABULOUS red velvet cupcake. Only other option was a choc chip cookie. Cupcake has an edible "G" on the top indicating it's GF. Will go again!

Servers were super helpful in getting gluten free cupcakes - red velvet, too! They changed their gloves and packed up my cupcakes in the back, where the gluten free ones were stored separately. Absolutely delicious. Would highly recommend.

Delicious gluten free red velvet cupcakes. I also got a chocolate chip cookie that I didn’t try yet. While they do not have a lot of options, the ones they have are so good! Gluten free is kept separate.

Delicious, but was absolutely exposed to gluten. Felt ill within 20 minutes.

The red velvet was amazing and the staff was knowledgeable and understanding.

Legacy West location. They have a red velvet cupcake and chocolate chip cookie that are gf.