The GF dough is home made in a specially cleaned area.

The pizza is by far the best gluten-free pizza I have had. Most GF dough's at other pizza places is made and very thin, without taste. This dough is made in house. It's thicker than most GF dough and hasl far more flavor. The ingredients added were all fresh and created a wonderful tasting Pizza.

Best Gluten-Free Pizza in Ann Arbor. And the staff are amazingly helpful kind.

This is my favorite gf pizza in town. The crust is so tasty and the sauce/toppings are as well!! The staff is so kind and knowledgeable and I always feel safe here. I’ve eaten here several times and haven’t had a reaction!

Their pizza used to be our favorite but the last time it was smaller and thinner and didn’t hold up to the toppings :( 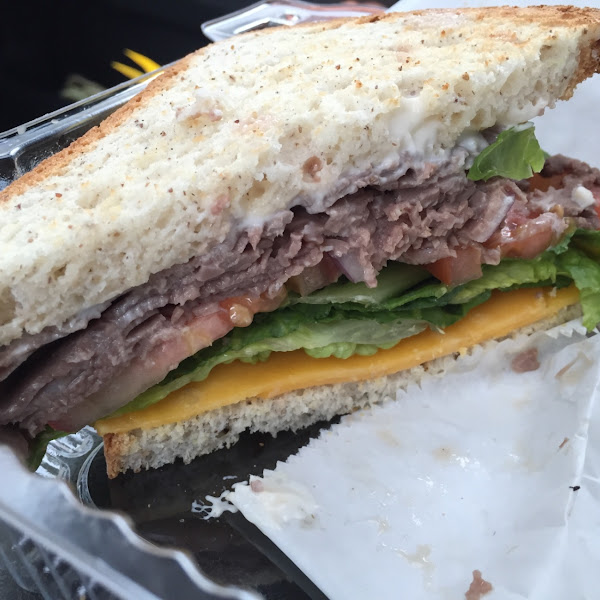 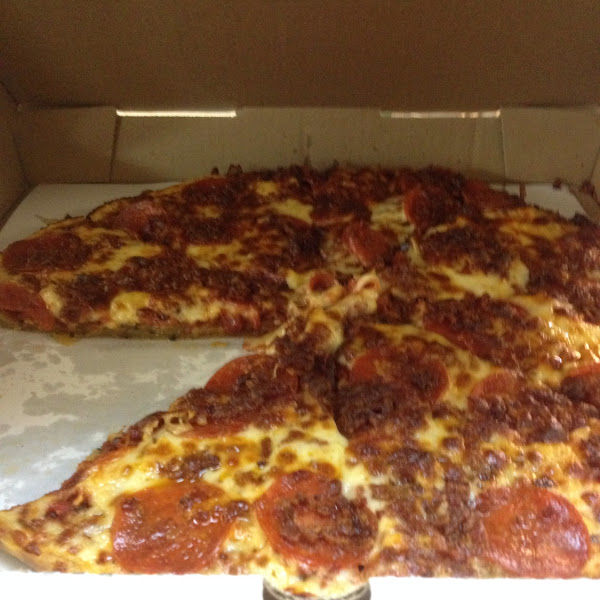 We were confused when we arrived late at night, because it looks like just a liquor store, but there is a grocery and deli at the back. Tho the deli/pizzas were closed, there were tons of prepared sandwiches and salads in front of it. The manager (owner?) is also Celiac and was able to show me which salads were safe. They prep them in a totally separate area from the pizzas. And they also make GF pizza, which she said is after they clean and wipe down the entire area, and she hasn’t had any complaints in 4 years. My Greek salad with feta & GF dressing was delicious. I may come back some time and have them make me a sandwich on GF bread.

So, I just tried this pizza a few moments ago, and this is without a doubt the best GF pizza I've had. I got diagnosed 7 months ago, and haven't had take-out pizza since. I can't describe how happy I am to finally eat take-out again.

So, the pizza is good and my son had a GF breakfast sandwich on Udi’s bread that was good. My only issue is that I can’t really say it is Celiac friendly. Countertop covered w regular flour and the employee set the thin cardboard insert for my pizza box right on top of it. I said something and she said, “well I was going to put your pizza on top of it”. I pointed out that the bottom of it would then be going into my pizza box, so then she got a different insert and moved it to an area without flour, and then she also changed her gloves and got a clean cutter. I am not Celiac but very sensitive and have not had any reaction. My advice would be watch carefully: some employees may be better trained than others.

Love his place. Been here twice and have been great afterwards. I’m celiac so they are really precautious about how they prepare their gf items. Gf sandwiches are on udis bread. It’s delicious!

This place was a godsend during a business trip. Great gf selection, knowledgable staff that pride in their work, and fair pricing.

Had a toasted sandwich and a specialty pizza another day. Pizza dough is good, a bit on the filling heavy side, but not greasy heavy. Happy they are on the south side closer to I 94 and the office parks.

Parking is a breeze as there are no meters to deal with. This place is also packed with enough booze to last someone a lifetime

This is the best gluten free pizza in Ann Arbor. It doesn't have that cardboardy bitter gf taste so common in gf pizzas. Stadium Market's pizza is loaded with tons of good sauce and cheese, and my whole Family (even the non-celiacs) was very happy. The crust is about 1/2 centimeter thick, and has herbs and good flavor cooked in the dough. The crust was buttery but not soggy or weak. The price was perfect too; no unreasonable "up charge" for GF. The menu indicates they also serve deli sandwiches on GF bread. I will try that next time.

Finally got a pizza from here and it was the best gf pizza I've ever had. The guy I placed my order with said they are very careful and aware of contamination issues. I will definitely go back.

It might not look like much more than a run-of-the-mill liquor store from the outside, but don't let appearances fool you, lest you miss out on the best gluten-free pizza in town! Reasonably priced and more than reasonably delicious, special care is taken on every order to eliminate cross contamination. The gluten-free crust is soft and f luffy and is topped with a tangy f lavorful tomato sauce. Most toppings are gluten-free including the meaty ones. It should be mentioned that about an hour notice is requested by the staff on gluten-free pizza orders. If you're looking for options other than pizza, any of their cold deli sandwiches can be made gluten-free and you don't have to sacrifice the bread. While it's not a sit-in restaurant, you really won't regret popping in.

They are great. They have some GF grocery staples (ie, Udis bread and cookies), but they also do wonderful deli, pizza and catering business. Just now I am eating a hot ham and cheese sandwich because I don't have time to swing home for dinner. Fantastic thick just-cut ham. Yummy!

Best gluten free pizza in Ann Arbor. It is the only place I know where you can buy a large pizza with a few toppings for ~$16 and it easily can fill you up. Previously, the only options were Dominos or Cottage Inn small pizzas which charged $10 for each small and would realistically only feed 1 person.

They cook them in individualized tins in the oven so I don't think they would get cross contaminated. The staff is very nice and knowledgeable though if you ask questions.

These large GF pizzas are amazing AND they feed about 3-4 people I'd say.

My favorite pizza in Ann Arbor. Crust has herbs in it that "look weird" to my kids, but it really does taste great!

Gluten Free Pizza!!!! - As a gluten free family we plan our vacations around gluten free food options. We were a little unsure when we saw the place. It is just a counter in the back of a liquor store. We were very happy with the knowledge of the staff. The service was GREAT! The gluten free pizza was awesome! We will definitely go there again if we are in the Ann Arbor, MI area!

GF pizzas cooked in separate (deep dish) pans - but pizza not deep dish. Also, I was told that person who developed the recipe and process has celiac.

As a new gf person I found their pizza to be unbelievable. I also love their sandwiches. no more tasteless lunches. they also have a nice selection of ft beers and viewed.