What an amazing find! I ordered GOAT (greatest of all time) pizza with figs, goat cheese and other goodness on a gluten free crust. As well as the spinach salad — one of the best salads I’ve ever eaten. They were so careful, even re-cleaning my plate to ensure there was no flour dust from the kitchen. Just when I thought it could not any better, they told me about the gluten-free CHEESECAKE!

Also I am severely celiac, and asked a lot of questions. They passed with flying colors!

I had a mixed green salad with balsamic dressing. It was delicious. I also had a gluten free pizza with pepperoni and green peppers. It was delicious. The gf crust is very thin and crispy. They also offer a cauliflower crust but I did not try that.

Excellent pizza and great service!! First gluten free crust I've had that was not soggy. I am so happy. They also let me sub out the mozzarella for goat cheese! 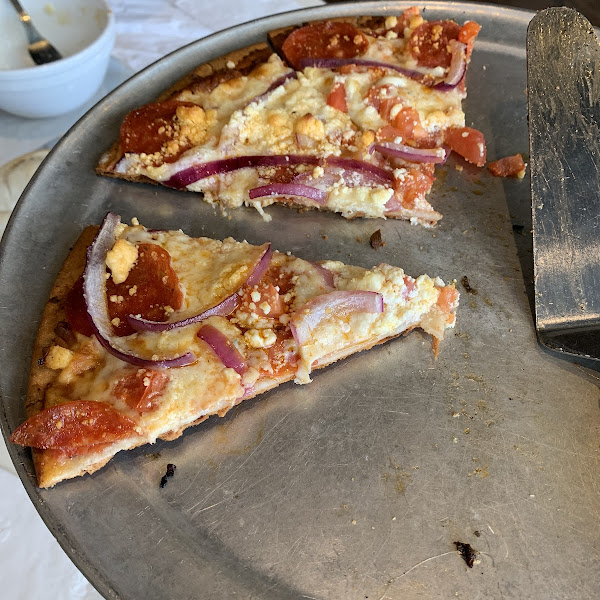 We called up this place after driving by and they said they had a gluten free crust and that they prepared the pizza on a separate work area to protect from cross contamination. All of the staff that greeted and served us were super helpful and assured us they would take the proper precautions to protect against cross contamination. One of the waitresses who waited on us said she had food allergies and she knew what it was like so she was watching out for us as well. They only have the gluten free crust in Medium but it is more than enough for two people, possibly even three people. All of the toppings are gluten free according to them. My wife and I got a pizza with Italian Sausage, Canadian Bacon and Pineapple and I did not have any reaction at all. They had wines there as well if you like a good glass with your pizza. On a side note, and a plus to this place, they did not up charge for the gluten free crust. Which if you have to eat gluten free you know that it is usually much more expensive. So kudos to this place for that.If I could give Ten Star Pizza Kitchen ten stars I would.

July 2018 Update to this review. A fellow named John, has a British accent, and said he was from Spain, was awesome to us! The kitchen cooked the wrong pizza and he saw it as it was coming to our table and stopped them. He gave us a complimentary pizza and then watched over the cooks shoulder to make sure he made the pizza right. This is just one of the times that he has treated us great. Every time we go there they have excellent service. And if you have celiac disease I have never been to a more celiac friendly restaurant. If I could give them a hundred stars now I would give it to them! Thanks also to John and his mom who was our server!

The gluten free pizza is wonderful!