Even at the bar, the bar tender was able to handle my gluten-free needs knowledgeably.

Even though it’s not on their website- they have a GF menu! I got the shrimp and scallops in a tomato cream sauce over rice with a side of broccoli and it was good! It’s very touristy (there is a gift shop downstairs) so the prices are high but if you like history, it’s a cool place to check out and get seafood!

I had the seared shrimp and scallops and it was pretty tasty. There’s a gluten free menu, which has a few options. The staff seemed knowledgeable and I didn’t get sick. I’d recommend this place. 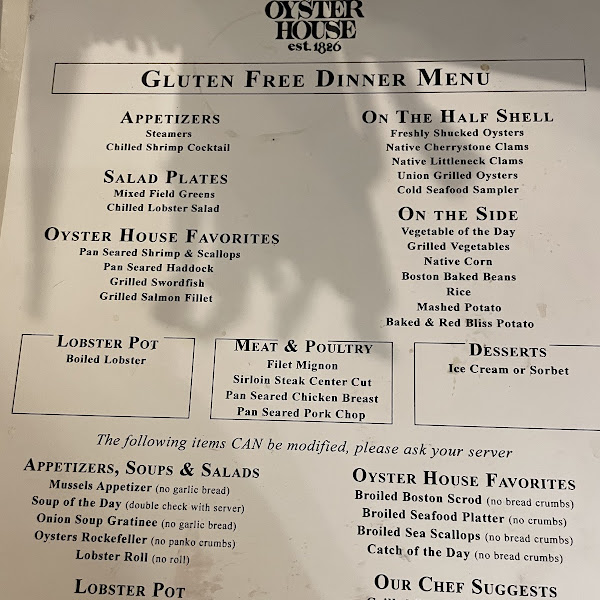 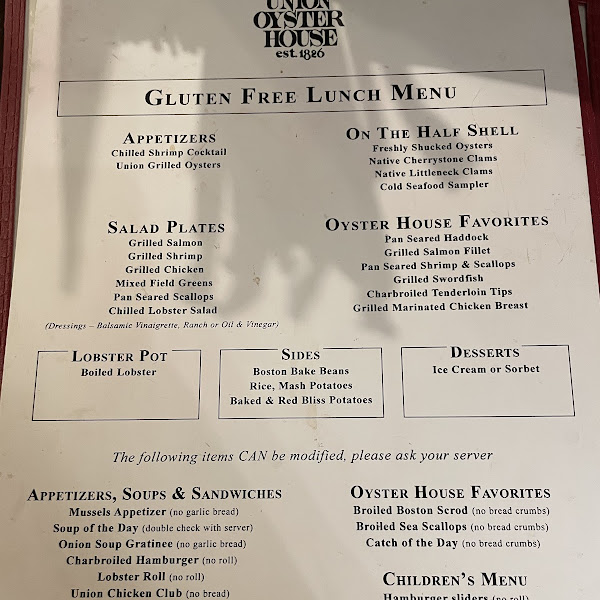 This restaurant is the oldest continuous restaurant in Boston and thus is a huge tourist attraction, which I’d normally avoid. We had tickets to Game 7 of the Stanley Cup Finals, and all of the restaurants had huge lines except the Oyster House. It’s always busy and seating is on multiple levels. Our waitress was attentive and brought a gf menu. No gf beer or cider, so I stuck to water. I chose a pan seared cod & was surprised to find it breaded; it was cornflake crusted and cooked exactly right. (I was nervous about the breaded fish but a week later I’m perfectly fine.) Vegetables were a stir fry; onion, pepper, zucchini & summer squash, with way too many onions. Everybody gets a small dish with three red potatoes sitting in liquid butter. It’s obviously assembly line, almost cafeteria type food. My son got a huge fish & chip dish with asparagus; he ate every bite plus the corn bread I couldn’t. For the cost, not a great value, but we got in and out in time to see our game. We watched people getting huge shellfish platters and lobsters, perhaps the more expensive dinners would justify the expense. You’re paying for the experience more than the food. But I ate a decent meal with good hearty protein in the timeline I needed.