We went for lunch. Our waiter - Rich was great about double checking that things were gluten free. Had the 26th Street shrimp and it was yummy!! 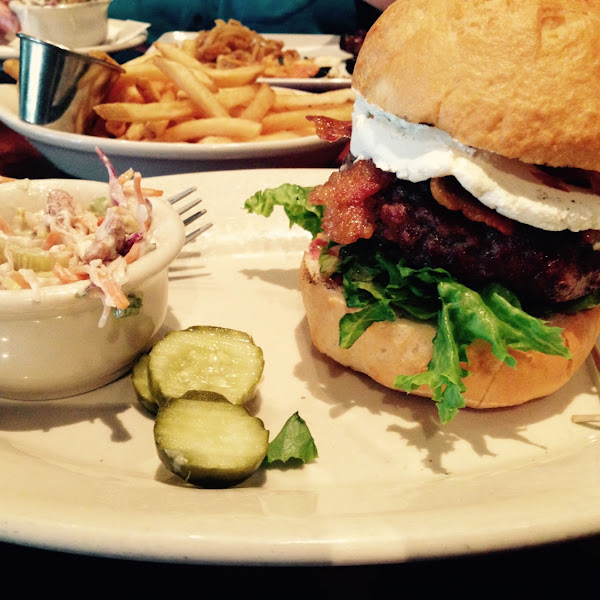 We enjoyed this restaurant very much! Our server was very knowledgeable about GF, even bringing up cross contact and how they prevent it before I said it. He double-checked our GF order with the chef and reported back. Prices seemed a little high but worth it for the level of attention we received. We will definitely go back!

Good food and knowledgeable about Celiac!

Service was really bad. The manager was clearly annoyed that we were there from the time we walked in. Had to be seated in two different booths because of the wait, but after seeing a large table walk out, they said they were already prepping the two booths, so we couldn't have that table. More importantly, my ribs came with bread on it after specifying a gluten allergy. I notified the apathetic waiter and he took it back to the kitchen. It came back speciciously fast, so I asked if it was the same ribs. The waiter quickly answered no. I inspected the ribs and it clearly had bread crumbs covering the ribs. The waiter came back and then said, they actually were the same ribs and they would make more. I finally got to eat while my table was nearly finished. The second star is only for the fact that I didn't end up sick and the food tasted good. No real apology was offered and meal was full priced. I would avoid this place based off the service alone but it is specifically not celiac friendly.

Order over the phone for GF options. AMAZING staff who gets it!

Though they have a great gf menu, implementation falls through. Two nights in a row, we ordered the gf burger and stated allergy for clarity. Both times, burger came with cross contact fries (not gf) on plate and touching burger. Even after I was specific. Problem resolution was lengthy and no one took accountability

Very good with allergies! We had French Onion Soup, Brisket, and the Prime burger. All was delicious! They had a GF brownie for dessert too. Would definitely recommend!

Celiac safe with many GF choices. Servers take GF seriously. Have dined here several times and have always had good meal with no reactions.

Food was great and a gf brownie for dessert! Great service, the manager is put in charge of verifying allergies and serving gf food. Will be back

food was good, bbq beans were amazing, service was slow but they seemed to do a good job with allergy issues

I was very happy with the gluten free options at Weber Grill. I sat at the bar, and the bar tender was very accommodating, and better yet, they had a gluten free beer available. Good food, good service.

Phenomenal! Told manager of celiac needs and he was very receptive. The chef came to the table prior to ordering to answer any questions. The server was awesome and they have a system of using a red slip of paper on all allergy/celiac concerns. On top of it all the food was great!

This is one of the best gluten-free places I've found. Everyone was very understanding of gluten free. I had ribs, beef brisket, pulled pork, beans, and whipped sweet potatoes. Each item was excellent! The server explained they are a scratch kitchen and chefs know all ingredients in their items!

The food was great. I had a cheese burger without the udis bun. I also had garlic potatoes. they were pretty great too. I'd recommend this place.

Delicious and GF options are many. I have Celiacs and no problems at all

Nice selection of items from the GF menu. BBQ ribs are delicious! Manager brings out plate and verifies it's GF.

Very good food! Highly knowledgeable staff about gluten-free food. Prices are quite high. Our family of 5 spent over $200.

Amazing burger and salad!!! Not a fan of GF buns and didn't really need one :)

Pulled pork and BBQ ribs are delicious!!! The coleslaw and sweet potatoes are a nice touch.

Staff was very knowledgable and took great care of me.

The staff did an excellent job of making me aware of items that could be cross contaminated. They also asked me about other food allergies, and made note of them for the chef. All in all, it was an excellent experience, and "The Farm" burger was delicious!

Good burgers, gluten free buns, lots of choices on the gf menu. Service was slow, but the manager apologized and offered free dessert.

they have decent g-free hamburger buns. Order just the bun instead of the rolls so u can enjoy the cheddar butter too. amazing.

Lots of options, but nothing's ever blown me away. All GF alterations seem to make things end up dry...

I was visiting Chicago and I saw this restaurant had gluten free options on their menu so I thought that I would try it out because usually restaurants that have gluten free labeled on their menus are safe. But all I can tell you is I came here and got the salmon with dill carrots and mashed potatoes, all which I am usually safe with getting at most restaurants and I got SO SICK! All I can tell you is if you have celiac you definitely should NOT come here and I wish I would have read some of the reviews sooner.

There’s nothing marked on the menu, but the waitress was super knowledgeable and was very willing to help us figure out what we could order. The chef reports back to the waitress on what he can/cannot do and we were very satisfied that they tried their best to accommodate what we wanted. We got the salmon (topped with a bourbon sauce) and a side of green beans and garlic mashed potatoes. My dad got some ribs and potatoes. Was a great experience overall and we did not get sick!

Staff seemed knowledgeable but there is no GF menu. Waiter just told us what the could make gluten free.

Went here because the positive reviews regarding dedicated menu, etc. unfortunately the food did make my partner very ill as if something was cross contaminated in the kitchen. Unfortunately wont be coming back to this establishment because of this issue :(