I called to order take-out during the 2020 social distancing. I was asking questions, and it was clear the person on the phone was not as educated as the regular waitstaff, managers, or chefs. (Her definition of being gluten free is offering a special bun for sandwiches...when my question was about cross contamination.) But the good news is the majority of the staff understands allergens and takes them seriously. I have never gotten sick.

Excellent ribs, chicken, roasted veggies, mashed potatoes. A little sad I couldn’t order the medallions, but they weren’t on the gluten free menu.

Our waitress, Nina was AMAZING. She was knowledgeable and helpful with menu. They have a huge gf menu but I have a dairy allergy as well so they made additional accommodations for me. The food was incredible!

Awesome GF food and they take cc very seriously! They even do a GF banquet once a year which is amazing. 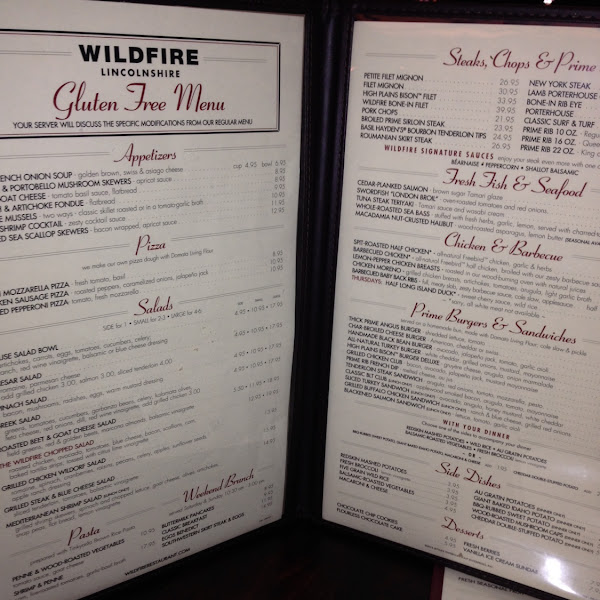 Do not order from this restaurant using Grubhub. They repeatedly ignore that items have been ordered as gluten free!

They are always willing to go the extra mile and ensure they can make something for you. They server worked with the kitchen to find what they could prepaid off of the brunch menu for me.

Full menu of gluten free options, Including steaks, fish and chicken entrees. They knew to properly clean the grill. It will become one of our go-tos for sure.

This place is great. The other reviews are accurate. Super knowledgable, big GF menu. Had the macadamia crusted halibut and GF french onion soup. It was really good.

The staff is very knowledgeable and they have an excellent, dedicated gluten free menu (especially the bacon wrapped scallops).

Separate GF menu. They have worked with the University of Chicago’s Celiac Disease Center on their menu and practices for GF. I have eaten here many times and have always had a great experience.

Wow, huge GF menu compared to most places. I had GF French Onion Soup, Petite Filet and out of this world Au Gratin Potatoes. All of it was fabulous!

excellent food, utmost concern about Celiac allergy. your food even comes with a stick labeled "allergy"

They are good about handling food appropriately (they always ask if my gf is a preference or an allergy) and I appreciate that but outside of the excellent beet salad, my food here the last two times I went has been just so-so. If I'm paying a boatload for a steak it really needs to be prepared correctly and the staff needs to be more attentive after the food is served.

Our waitress Amy V was amazing! She happily met our dietary needs without making us feel high maintenance or abnormal. I had almost sworn off of Wildfire after a horrible experience in Schaumburg, but Lincolnshire has put Wildfire back on my radar! I have major Celiac issues and I had no reactions. :)

We came here for a GF brunch with the University of Chicago's Celiac Center. Delicious! I hope they incorporate some of the dishes on their regular brunch menu. Wild Fire does a great job with gluten free.

Absolutely some of the best service I've ever had. Derek L was fun, quick with food and refills. Let's talk about the food: amazing gluten free BBQ ribs and mashed potatoes. Derek wouldn't let us leave until he gave us the gluten free molten brownie- couldn't tell it was gf and it was great! The extensive gf menu is sure to please anyone's taste. One of the best restaurants and overall dining experiences I've had in the past 2-3 years!

Best gluten free menu ever!!! It is seriously impressive. Black bean burger was pretty good. Bread not that great but at least they have it! Pizza, pasta, sandwiches are all an option!

I do like Wildfire for a lingering night out with friends and family. Lots of options to select from and the servers always seem knowledgable. Just allow a few hours from start to finish but well worth the time for such delicious food!

Delicious! So many options that can be made GF! Highly recommend making reservations well in advance as we waited in the crowded bar for an hour and a half for a table.

The bread you get to start is yummy! I'm guessing that its the bun they use for hamburgers. They have a wide variety of gf options that hit he spot.

They give you gf bread just like everyone else. The apple martini is my favorite here. The pizza and salads are great.

Has GF pitas for sandwiches.

I’ve eaten here a few times in the past year and haven’t gotten sick, even though I have Celiac and am very sensitive to cross contamination. I have found that the servers aren’t all knowledgeable about gluten and once was assigned a new server after speaking with the manager. I tend to go out for meals at quieter, non-peak times which may help too. I received gf bread, which was slow to be served but tasty, and each meal, usually a fish dish, was delicious, well prepared, served by someone other than our server, who wore gloves, and the meal was clearly marked as “allergy.” Because of bad experiences at other restaurants I tend to choose meals that are naturally gf so I can eliminate at least one source of potential contamination and worry. This may account for the difference of reviewers experiences, which are certainly troubling to read. I’ve been told each time that the restaurant has separate prep and cooking areas, so now I’m a little concerned by what others here were recently told. All in all, I’ve had delicious meals at Wildfire and great experiences with no illness.

Another great experience. Server was very versed with GF. He filled out a separate allergy ticket, I asked him to put celiac on it.

All food was delivered labeled for me as gluten free and made without cross contamination . I ordered the prime rib with a sweet potato, food was high quality and the server was willing to ask the chef questions to ensure my needs were met

I have a Nima gluten tester, I tested the cauliflower mozzarella pizza which came back “gluten found”. The server said when she spoke with the chef he said the sauce could have been cc.. I requested in future they have separate pizza sauce than the one they use for wheat pizza crust. The flourless chocolate cake and gf bread’s results were gluten free!