There’s no GF menu, but the server had a list of allergens to help me choose a safe meal. The workers appeared educated on celiac and other food allergies. They changed gloves and used clean utensils. You can watch them prepare your food. I had the Pangoa bowl but changed the dressing from bbq to a GF cilantro lime. It was delicious and I didn’t get sick.

Most of the menu is gf. Knowledgeable staff and helpful. Have ordered multiple times with no reaction. Good, fresh food in good portions. My go-to for lunch

Staff will look up items in allergy binder. Very helpful.

So good and large soup portions. Highly recommend this place. The menu is clearly marked and the staff is very knowledgeable about what is and is not Gluten Free.

Great place for when you want something fresh and simple. The owners son is celiac so they are really careful not to contaminate. I normally get the bowls but last time he let us try the turmeric smoothie and I would definitely get that again.

Health food restaurant that has an extensive allergen menu on their website.

They don't know what on their menu has gluten in it, and the guide they use doesn't include all of their items. I don't recommend coming here.

They have an allergies menu and it will tell you which products contain Gluten or not. Useful for things like the sauces.

They have an allergen list and make the food in front of you.

Gluten free Tex Mex bowl was quite good for a quick safe bite to eat. Staff was knowledgeable about GF.

If you look at the nutritional info, it is easy to tell which ingredients to take off or which can be added without gluten. That said, you should make a point to tell your server that you have a serious reaction to food with gluten and cross contamination is dangerous. Go in to order, don't order online. Harder to be sloppy if you tell them this and then stand by while they prep your food. My favorite is the Oaxaca Bowl, hold the wontons!

He bought three wraps and brought them home for dinner. I looked at the wraps and asked what they were made of, but he didn't know, so I called the Freshii restaurant myself. I have never eaten there before, so I decided to confirm that the wraps, which did not look gluten-free, were in fact safe for me to eat.

I called the Evanston restaurant at 7:00 pm on 7/9/19. The girl who answered the phone told me that the wraps are gluten-free. So I asked what they were made of. She asked me to hold, then came back a minute later and told me they were wheat tortillas. I asked her to repeat herself. She said that they were wheat. Obviously, then, they are not gluten-free.

I wouldn't trust this place to serve gluten-free food,or to even have any idea what gluten-free means.

Incidentally, they didn't even get his order for the wraps right. Two of the wraps just had beans and rice in them- nothing else.

This is the only place I completely trust to order lunch. Very aware of cross contamination and change gloves every time. This place is great to eat in or take out (which I always do).

Great new cafeteria style restaurant with healthy food and a majority Gluten Free menu! I just had the Recoverri smoothie and Fiesta salad and it is so fresh and yummy.

Owner's daughter has CD and his whole house is gf, so he knows his stuff. Staff changed their gloves, and they looked at their allergy sheets to see which sauces were gf, and helped make changes to their menu items to accommodate me!

Almost everything here is naturally gluten free, including their soups. Knowledgeable staff understood gf food prep and and pointed out the few items that are not gf. Will definitely be back!

The staff tries, but they are unequipped to be truly gluten free. Even if you order something that the menu states is gluten free, there is too much chaos happening behind the counter. Ordered a gluten-free Buddha Bowl (more than once) and have never rec'd it without a stray wonton or two.

The staff was very knowledgeable and very helpful. Great place.

Location is deemed unsafe for celiacs and people with other food allergies. I think it is a chain-wide issue with how the food prep area is set up. We were regulars but no longer. I watched as the prep person grabbed handfuls of toppings ( crispy wontons, sliced almonds) from the bowls above the main toppings and then saw same toppings rain down into the food below. The staff did not understand how serious this was. HQ was even worse with their response. I will never eat at any Freshii ever again until they make vast improvements with how they handle high risk allergens.

I got a bamboo bowl and it was delicious! My server John has celiac also so he was extra careful. Make sure you specify that they use from the back toppings just in case someone touches a burrito.

Asked for a gluten free bowl and got a stray wonton. Not impressed.

I ate at this freshii in the sac airport when I didn’t have many options and felt safe. The staff was young and a bit clueless but totally open to doing exactly what I told her to. I chose an item out of their regular gf selections and had her change her gloves and make it in a separate area. I had the Mediterranean salad, which was not that good. The ingredients seemed a bit old, but that might make sense given the airport location. My friend who was also celiac ordered the pesto chicken and both of us felt fine. Definitely a stop for a celiac in need. Food was 3.5 stars and safety was 5

This location is closed. Not sure about the entire chain.

Meh. Don't be fooled by the name. It's not fresh. Salad was brown at the edges. Smoothie was room temperature. The employee kept having to look up what went in my salad.

Freshii is not the healthiest choice. Veggies are healthy yes, but sauces dips and dressings are not. Cross contamination is a definite risk at any Freshii chain

The staff had an allergen menu and was very knowledgeable! Food was fantastic, including the smoothies which are also gluten free! No cross contamination!

Very conscious of allergies and celiac. I was impressed that everything is completely marked and transparent with what’s in it. Honestly only give 5 stars because I found the food a little bland.

Very helpful staff. I asked if they'd change out their gloves and they went a step further by opening up new cranberries and slicing up an avocado fresh for my salad. Make sure you ask though--one time I didn't and I realized they had used the same gloves to make my salad as they had used to roll a flour tortilla burrito.

Just went here for the first time. The place is run by a nutritionist so she was great with food allergies. The food was healthy and delicious and the service was great.

My daughter brought me an egg bowl one day when I wasn't feeling well. She asked them to use separate gloves, and I did not get sick, but she said it didn't appear to be an overly safe food environment. The serving was quite large, I'd say almost twice as much food as my similar order at the nearby Protein Bar.

This is one of the only places I will eat grab-and-go at Mall of America. They do have some tables you can sit at though too. If you ask them, they have a GF guide behind the counter to show which items are gluten free. They have rice noodle bowls, quinoa bowls, salads, etc. I ordered a pesto noodle bowl with grilled chicken and it was delicious. You can see their food prep area and it is celiac friendly. If you need something sweet, they also carry a variety of pre-packaged cookies, muffins (I think), and carrot cake from a local dedicated GF bakery in Eagan, MN called Bittersweet bakery.

They are so sweet here and if you ask, they will tell you exactly has gluten in it. My favorite thing to gets are their rice bowls. If you substitute out certain sauces it will be totally gluten free. I had no problem with it at all!

They have an allergen menu online and a lot of options.

Spoke with the team lead. She was very accommodating. Got a Cobb salad (deviation: basaltic dressing and cheddar cheese and no bacon). Used my Nima Sensor: came out GF.

I'm not sure why everyone is happy with this place. I went there to get something for breakfast. The cashier and "cook" didn't know what breakfast items were available for gluten free and offered to call the owner. After waiting for 5 minutes they said he "thinks" I could do xyz. This is not an organized celiac or even gluten friendly place. Maybe something changed.

**update 3/17 - I did find an allergen list online, but staff still not helpful in store.

Great staff and great healthy, fresh food. They have salads, bowls and soups can all be made gluten free. Think Protein Bar, only better. I love going here for lunch during the week. Never disappoints.

Although the workers were not too knowledgeable, they have a gluten free menu available on hand. The store is very small so you can see how they prepare your food so you know if they are taking your cross-contamination requests seriously.

Great bowls that are GF. Just tell them about your allergy.

great fresh food with a lot of options for gluten free food. they make all their food in house including dressings. big point for me is their big awareness for allergies.

I'm on a detox where I am gluten free, dairy free, and processed sugar free for 30 days. Freshii is the only place I can eat without worry! All of the meals are customizable and they have a pretty awesome selection of gf dressings and sauces. My favorite thing to get is the #Lifesupport smoothie, good clean veggies and fruit and no mystery extras.

Not impressed. None of their sauces or soups are GF. Even the tofu isn't safe. I left and went to the Vietnamese place a couple doors down. I won't dine here.

One of my go-to places for lunch near work. Great custom soups and salads. Allergen info on display. Fresh delicious food.

Customizable bowls with brown rice, quinoa, and salad with lots of fresh mixing options to creat your perfect meal. I had a brown rice bowl with peppers, artichoke hearts, kalamata olives, and chicken, with a lemon tahini dressing for about $9.

this location is closed. :( 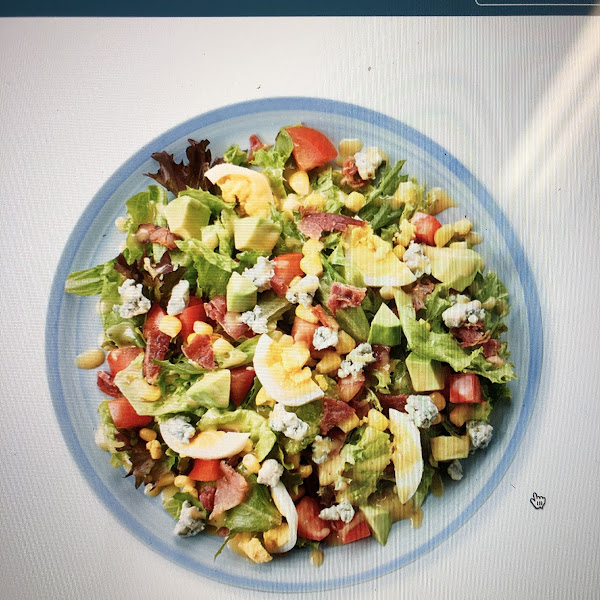 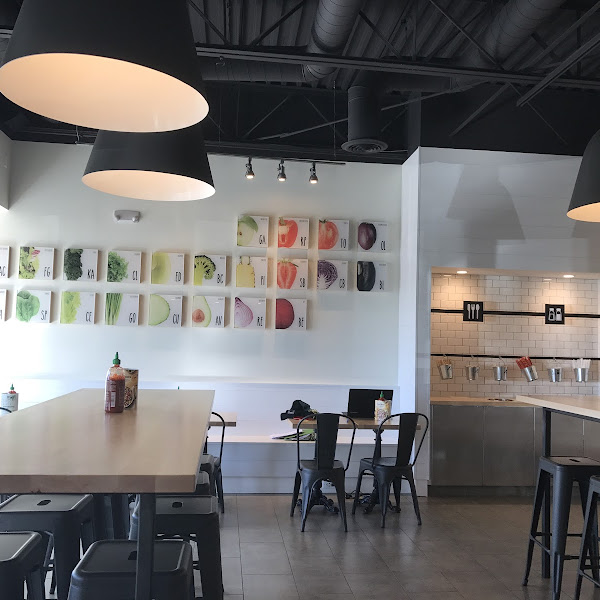 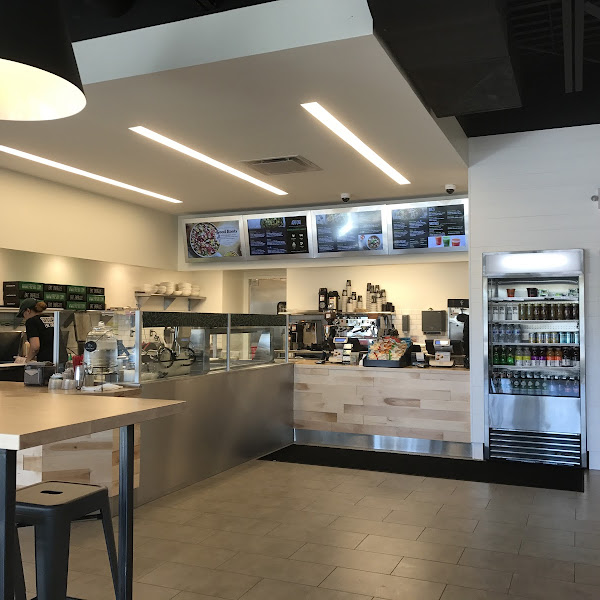 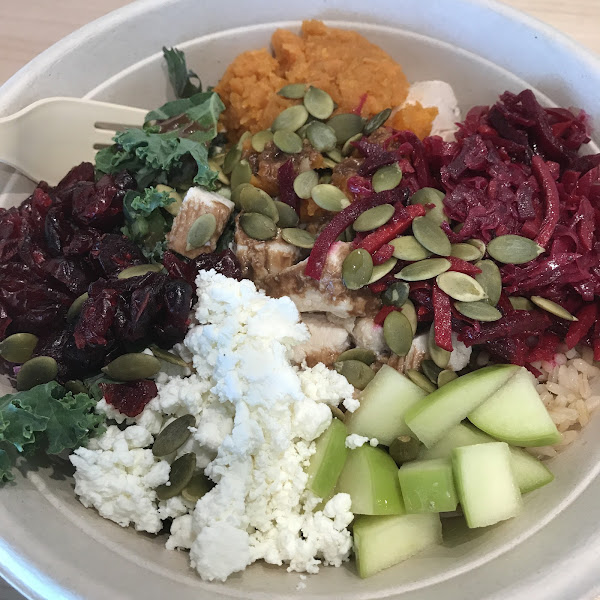