9 ratings
Reported NOT to have a gluten-free menu, but gluten-free options are available.
Reported GF menu options: Pizza
johnnyspizza.com Menu

I ordered via door dash, but they offered both a GF crust and a cauliflower crust. Pizza showed up boxed nicely and had obviously been cooked on its own metal platter to minimize cross contamination.

They have GF crust options but when I told them it was a severe reaction, the server let me know they couldn’t even serve me.

FANTASTIC GF cauliflower crusted pizza. Chance of cc because it’s a pizza place. Just tell them your specific needs. I’m a sensitive celiac and did not get sick. Highly recommend!

Pizza is good but there is also a good chance of contamination.

The Johnson City location was packed so I was sure I was going to suffer from cross contamination but it never happened. Definitely give this location a try.

They have a cauliflower pizza crust that's deliciously gluten free. They do have a statement that it is not a flour free environment and there is a risk for cross contamination. However, they do take precautions. They also have gluten free beer.

Pizza crust and toppings are GF, pricey although one of the best pizza places in town for GF. Some restaurants say the have GF pizza, but when you ask about the toppings they have no idea. Morons. It’s a family style place, casual dinning.

Great service and knowledgeable staff. My gluten free pizza was made to order (that seems to be the only choice, so I'm confused by another reviewer who claimed his was old and cold). They are not celiac friendly, due to flour every where. I am only gluten sensitive and did not get sick. Also had the buffalo chicken dip - yum!

Served a pizza that sat for HOURS on their warming shelf. Manager offered no apologies. Servers are grumpy. Three times with subpar service and we no longer go. With all of that I would not trust their GF promise.

Not safe for celiacs. The kitchen is loaded with flour and gluten containing products of course. So even though I absolutely commend them for having a gluten free pizza crust available for those who aren't very sensitive, this absolutely isn't an option for those with celiac.

My stomach hurt a bit after eating here. Okay crust and taste. Johnson City location is better and has smarter staff.

The gluten free crust was improperly cooked, and I was so disappointed. I wish I had read the previous review before eating here. I would not recommend this restaurant.

False advertising. GF pizza only has GF crust. Owner and staff know Nothing about cross contamination. When questioned about their incorrect and misleading advertising the manager became standoffish and subsequent calls to the franchise owners and regional franchise directors have been ignored. Do not eat here!

The BEST GF pizza crust/pizza i have had to date!!

Not the best gluten free pizza, but when you're on vacation it is a great option. Service was a little confused about how to deal with a celiac.

Gluten Free pizza comes in its own pan.

When we walked in and were greeted, I asked if they had a GF crust. The friendly guy said yes. We sat down and our waitress came to get our drink order. The first came up to the table with a printout of the ingredients of their gluten free crust. It wasn't a whole menu, but it was helpful for their crust. They only have one size (10" - $17) in GF. I ordered a veggie GF pizza and it was pretty good. I did have reactions to it about 20 minutes later though, so I wonder about cross contamination. Which is weird, because they brought it out on its own aluminum pizza pan that apparently keeps it from touching their regular crust's pans. I'm not sure if they used the same pizza cutter or not. I'm also dealing with a possible dairy allergy, so it could have been the cheese that made me sick. Overall, they were very friendly. The first guy came back out about halfway through and asked me how it was. Not sure about anything else on their menu (pastas and sandwiches). 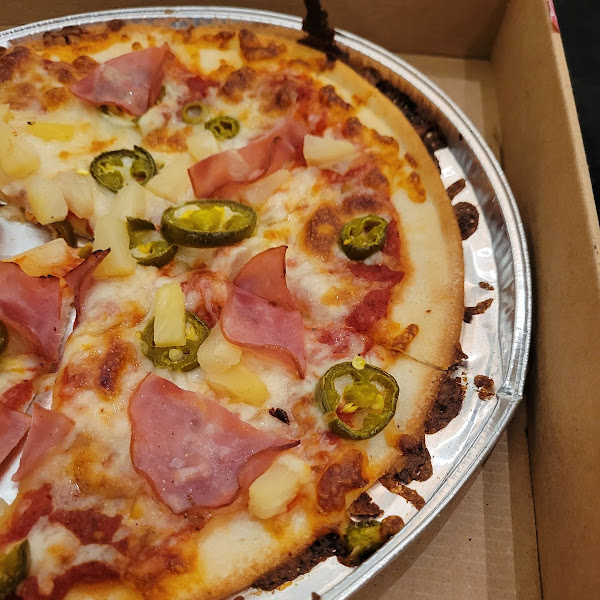