4 ratings
Reported NOT to have a gluten-free menu, but gluten-free options are available.
Reported GF menu options: Pizza
papaginos.com

The gluten free pizza was delicious, and their online menu only offers toppings for the gf pizza that are also gf. Online you can read about the strict measures they take against cross contamination - I felt great after eating their pizza!

This is one place we consistently order delivery from. I’m crazy sensitive and have never gotten sick from eating here.

The staff and management are very dedicated to a gluten free pizza and separate baking facility. They present your pizza (10 inch), with a unique piece of parchment paper to prove that there is no cross contaminants. They recently started to make their pizza with UDI’s dough, so don’t be alarmed if it looks like regular pizza. I enjoyed eating a hearty crust for once in a long time.

Great food & staff. Just ask about Celiac precautions, and they will comply!

They have gluten free dough, however there is a warning below it stating cross contamination is a possibility. The staff assured me they use separate gloves, pans, and utensils.

GF pizza is good but really over priced in my opinion.

Horrible, no good, very bad Pizza. No respect for celiacs. No safety protocols. If you can’t or won’t make safe gf food, then please don’t.

Felt safe eating here- great gluten free pizza too! One of the best I've ever had! Definitely recommend- though it is a little pricey, it's worth it!

Papa Gino's claims to be GF friendly, and some of the staff is... but if you have Celiac and want to avoid any contamination you should avoid this location. We have seen some poor practices - not changing gloves between regular crust and GF crust; taking from same topping containers used for regular pizza without cleaning hands; using same countertop for laying out pizzas - that would not let me be comfortable serving to someone with Celiac. I think some staff try and the company claims the right facilities, but obviously training is inconsistent and unreliable. Unfortunately I will be avoiding in the future.

I didn't get sick but boy was the service slow and they charged me for the larger pizza and gave me the smaller one. Crust is made by Udi's. 10 or 12 inch

Pretty sure my son's GF pizza was cross-contaminated tonight. He got very sick right after eating it. Disappointing because we have eaten the GF pizza in the past without any issues.

My child has celiac. We get pizza there fairly often and she never got sick. They are always very careful, knowledgeable and friendly.

Pizza and staff were great. Definitely enjoyed myself. Papa Gino's was one of my favorites pre gluten and now it can be again.

Udi's crusts advertised right on the door. Crunchy stuff thin crust, very tasty. They use a sheet of parchment paper under the pizza so it doesn't touch the oven directly. I even saw them use a cutter labeled for Gluten Free pizza only.

Pizza is Udis crust. You can get small or medium! They are trained to keep ingredients separate and cook on special papers.

I ordered a GF veggie pizza and was sick for over a week. They use a premade Udi's gf crust but I do not believe the staff are properly trained to prepare it without contaminating it.

I have eaten Udi's crust before and not got sick from it. I have eaten GF pizza in other restaurants and never got sick so I have to believe this time it was due to how it was prepared at this particular establishment.

I would not eat here again. Or recommend it to anyone with CD or food allergies.

gluten free pizza new this year. it was very good.

They use Udi's crust and their toppings are excellent!

Their gluten free pizza tastes just like their regular pizza! Not the crust, of course, but the toppings. It was nice to taste Papa Gino's pizza again! The crust is Udi's, I believe, but tasted better than usual because it was cooked in the pizza oven. The man who waited on us showed us the separate ladle and pizza cutter they use for GF pizzas and said they change their gloves before they even go into the freezer to get the GF crust. However, when my husband called ahead to make sure they use separate utensils, the man he spoke to said no. When we got there about 15 minutes later, they had a separate container for the separate utensils. I'm not sure if the man on the phone didn't know what he was talking about or if they quickly threw together a separate GF utensil container. I would call ahead just to make sure! Also, the pizza is cooked on paper and doesn't touch the oven rack. Like most places, your experience depends on the employees who make your meal, but it seemed like they have common sense GF protocol in place. It was yummy and I didn't get sick, so what else can you ask for!?

GF pizza made in store with Udi's crusts. Many toppings also GF including veggies, sausage, and pepperoni. We've been there several times with no issues. They did use a pizza cutter once which had been used on other pizzas but realized their mistake and let us know. Unfortunately those were the last GF shells they had so we didn't get our pizza that night, but they did give us a credit.All in all great option for GF pizza and they know what they're doing.

Finally can eat a pizza here again! Tastes just like their original.

They use Udi's crust and make an amazing pizza. The staff are very knowledgable and there is quick service. They are also very good with cross contamination. Definitely recommend for celiacs or gluten allergies. 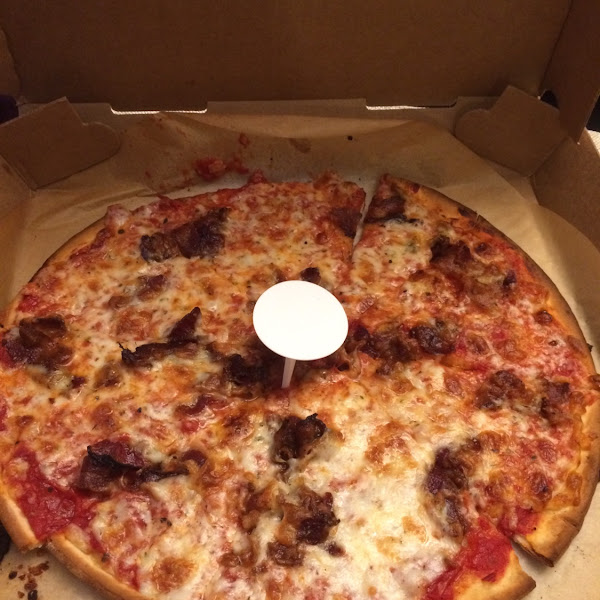