Go cautiously; their menu advertises GF fries but my waitress cautioned that it’s a shared fryer and it “depends on how sensitive I am.” She was polite and upfront, so I gave them the extra star. I don’t know what else may be actually GF if anything—I was in for a concert so not a great time to inquire. I opted not to order food at all. I hate to rip a business, but posted this review to yelp due to the fact they printed “GF” on their menu when an item isn’t. “It’s really wrong to list something as “gluten free” (printed on the menu) when it’s made in a fryer shared with other gluten items. That means the item is not gluten free and it is inaccurate to print it that way on your menu; it could make someone very seriously ill and cause damage to internal organs.”

The first time I are here - 2 years ago - the menu only offered GF duck tacos, which were delicious and safe. We were surprised to learn that the chocolate cake on the desert menu could also be made GF, so the night was fantastic! (The entertainment here is always great!) We went again last week and the menu has SO many more GF items!! I got the short ribs and they were amazing! (And no gluten reaction.) the dessert menu only listed the apple crisp as GF and we never got to ask our server about the chocolate cake because he was too overwhelmed to get back to us to order. So we skipped dessert altogether. The wine is always good too. In short, the food is good and safe for celiacs. But I recommend going for the wine and the show, not the food specifically, only because the service isn’t always the best.

Emailed about options and this was the email I received: Thank you for reaching out and alerting us of your dietary needs. I am pleased to report that much of our menu is available to gluten free guests - and our kitchen will be sure to do everything they're able in order to prevent any cross-contamination concerns. I've attached our current menu for your review. Note that every menu item marked with an asterisk is available to gluten free guests. Should you choose to book a river dome with us, I recommend mentioning your dietary needs in the "notes" section of Open Table - this will give our kitchen plenty of time to do their due diligence and protect you!

The menu clearly indicated several options that are gluten free or could be prepared gluten free. The staff were very helpful and knowledgeable.

We were walking around the Chicago Riverwalk and asking for gluten free options at all the places. This place said they could do almost everything gluten free by substituting the crackers or pasta. They do not have gluten free bread. I had the pesto pasta, small and delicious, but a little bit pricey. However, being a tourist and on the water I felt it was fair enough. My husband got a panini (not GF) that he liked. Lots of wonderful wine choices. And cocktails.

I’ve been here twice in the past year. The first time I went, I had duck tacos and a chicken dish and it was so yummy and I was so safe. We called ahead of time to see if they could accommodate celiac, and they assured us they could. I was eating in an event room watching a concert. Last night, I was in their Haymarket Lounge watching a comedy show, and I didn’t call ahead of time knowing it was safe last time. The servers were all triple and quadruple sat, as everyone showed up at the same time. I assume everyone was overwhelmed (including the kitchen) because they brought the wrong main course out for us, and then when our gf mousse came for dessert, it looked like it had brownies and a crumble on top. We asked the server and he went back to check with the kitchen and they said it was gf, so I dove in, and I could feel myself getting sick not 10 minutes after finishing the meal. So, if you go, it’s worth calling ahead of time so they can make a note next to your name about celiac—because the stuff they have there is so fun!

The menu is clearly marked with regular gluten free options. The kitchen is VERY helpful about making other menu items accessible if requested (i.e. no bun or bread on sandwiches, no breading on fish). As a winery, there is also plenty to drink!!

They have now added a ‘GF’ symbol on their menu which readily identifies what’s safe - night we were there was a steak a salmon and a roast chicken entree. Much easier to know what to order than ever in the past

This is a great restaurant, but doesn't have the most gluten-free options on the menu. However, when I told them of my allergy they were very accommodating!

Not a dedicated gluten-free facility but very knowledgeable and helpful staff/chef who will work with you to make your meal delicious and safe. 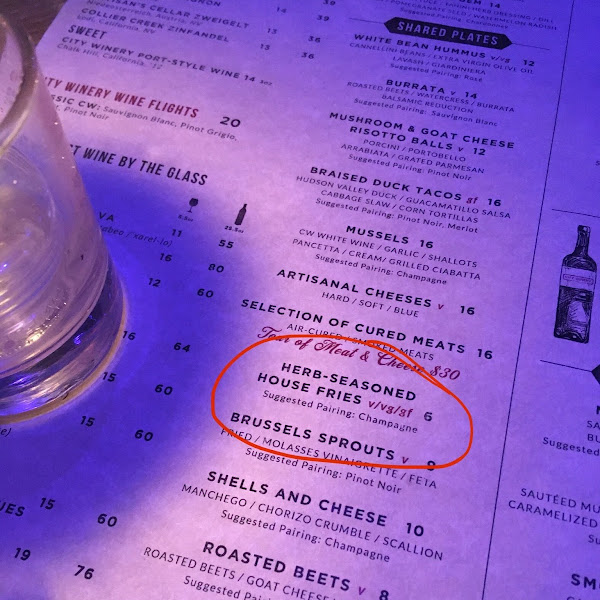