So tasty. A treat to get fried chicken and fries without worrying.

Super tasty. I also seem to mildly react to the fried shallots. Once I started taking them off…. I seem to do fine with this place. Love the fried spring rolls and fries with dipping sauce. Most dishes have GF soy but there’s a pork belly curry that’s amazing and glass noodles are tasty. I usually avoid too much soy but I seem to do well with whatever they do to the drunken wings. (Not sure if the fried shallots are a soy thing for me.) Def a little pricey but super tasty for a nice meal.

I’ve heard skepticism around the gluten content of the fried shallots that top some dishes so be warned and leave those off your plate if you’re worried. I my personal experience I have never felt sick eating here. The food is great and it is one of the only really nice date night kind of spots that I feel safe eating at. We go here for special occasions and the food is awesome.

Updated 1 year ago read full review
Reported to be dedicated gluten-free and celiac friendly. However, since menus and staff can change, please verify before visiting! 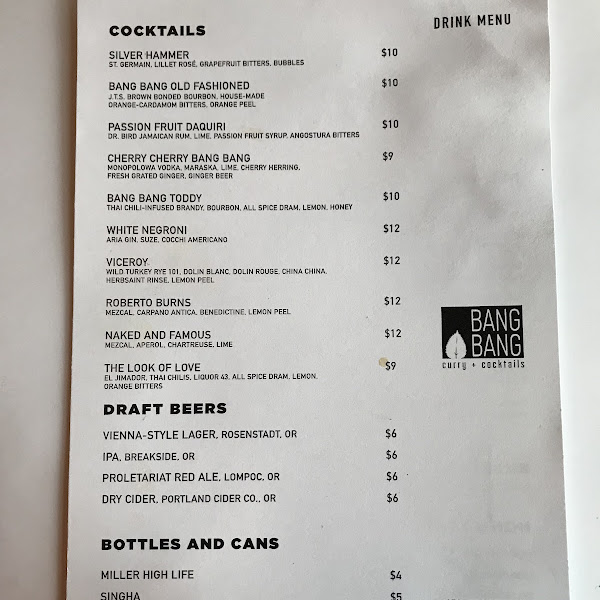 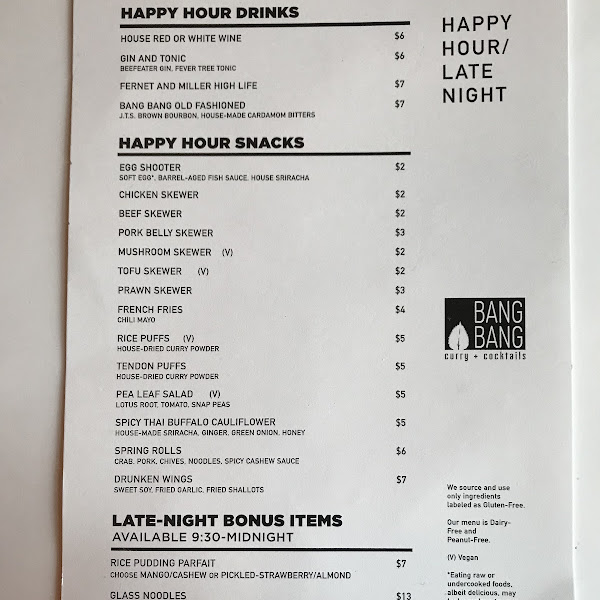 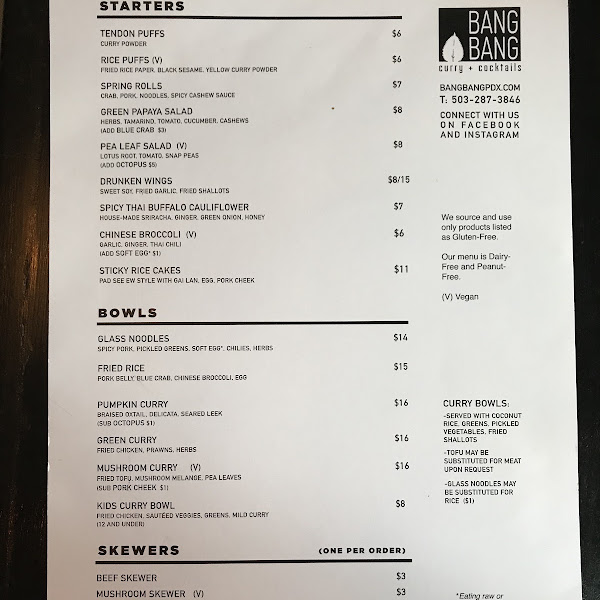 Tried to go here, apparently they were not open. No sign on the door, door was open. Guy was very rude about it. Won't be coming back.

I really want to like Bang Bang, but this place is expensive and not worth it. It’s not very flavorful and the portions are super small. We always end up forgetting this, ordering it again, and get disappointed.

I have been a few times and never had exposure issues. The server said they have updated all ingredients so everything is labeled GF (sauces etc). It won’t be on the menu, because it is all GF. Tasty food, I enjoyed the curries, especially the green.

Bang Bang is one of my favorite restaurants! The food has always been delicious and safe. I also love the fact I can get a GF mixed drink. Love. Love. Love this place.

Food is delicious! The wings are great and the fried rice is fantastic.

Why is this so highly rated?! Ate here 3 days ago. Flew in from Idaho, what a waste. Even though they are gf and df it wasn’t worth it, Go somewhere else! Service was nonexistent, had to seat ourselves, four people in the restaurant but took forever to order let alone get our food. Came with a group of four, two of us Got the fried rice which was smelly and tasted aweful and I have a cultured pallet for new flavors but my brother hated it to. Two friends got curry and glass noodles and said it was ok. Perhaps we got the wrong dish? However everyone had practically full plates when we left and no one wanted to take the rest home. Ran out of water half way through, waitress wasn’t rude but wasnt friendly or willing to serve either. Lemonades and teas were ridiculously small (think large shot glasses lol). No ac, it was in the 90s so we were all sweating, no fans either. I’ll be fair and say Pros: safe place for celiacs, cool vibe/environment, clean, good portion sizes, great prices (10-13 per plate). But that’s it! I was really looking forward to trying a bunch of their dishes and spend a ton of money here but the food was so terrible and the service nonexistent our group was sorely disappointed and left hungry and wasting a ton of food, it was that bad.

Horrible. They gluten poisoned me and I lost full days of work because of it. Their website says “All Gluten Free” extremely prominently right under their name, to the point where it’s practically a logo. I called and asked: Do you have a 100% Gluten Free kitchen? Yes, they said. I ordered our meal. When I picked it up I asked again, they reconfirmed.

But I got *full celiac symptoms*. When the 8 hour migraine cleared enough, I googled: a year ago a gf blogger tested their fried shallots and found gluten in them. They are still serving these A YEAR LATER and I am fairly sure this is what poisoned me. And I had an intuition about them (they didn’t seem freshly made and virtually all fried onion/shallot condiments have gluten/msg)

I emailed them and their response was that some of their ingredients may well have gluten in them “there’s no way to know.”

WHAT??? Then how do you possibly *call yourself gluten free*? How do you say that over the phone when I ask and not say: we don’t know about some ingredients but the kitchen is mostly gluten free. That is what every other restaurant in Portland does—they literally check the ingredients and tell you which ones they don’t know about. Other, just regular Portland restaurants will literally have the bartender check every ingredient in a cocktail to be sure! I guess I got too used to places caring, being honest and full of integrity—the opposite of what happened to me at Bang Bang:

This supposedly “gluten free” restaurant didn’t say “except for some ingredients which are x y z.” Totally deceptive business practice right there.

There are so many other places to eat that are actually gf on Portland. Teote, Cocina Verde are completely gf, and virtually ANY NORMAL RESTAURANT in Portland in my experience is safer than this place.

Also our chicken skewers were so undercooked we had to throw them out. Literally the worst dining experience I have had in Portland.

Excellent food. I’m celiac and had no reaction. My vegan friend had lots of options. The service was excellent and very knowledgeable and helpful. Overall excellent experience.

This is my favorite restaurant in Portland. Get the wings and any of the curries! Papaya salad also good. Their entire kitchen is 100% gluten free, there is no chance of cross contamination. Those who say they had a reaction must be reacting to a different allergen or sensitivity to spices, fried food, other things that aren’t in their normal diet.

Staff was friendly and the food was a flavorful experience, I love spice and I was certainly not disappointed - Followup: I had to change my rating because I got SO sick that night and through the next day. I’m only leaving 1 star because the staff was polite and efficient.

I have had great experiences here. The curry is delicious and we also love to get the rice puffs!

On the fancier side. Everything I’ve had here is great. Menu is a bit meat/seafood heavy. Curry is consistently my favorite menu item.

We love this place. The curry is great, the puffs are amazing, and my celiac wife has never had a reaction!

The wings are amazing! The spring rolls were very good too.

Unbelievably hard to believe it's all 100% gluten-free. Food, service and price beyond perfect!

While this is a totally dedicated gluten/dairy/peanut free restaurant it was not very good. The fried rice was crunchy and burnt. The menu is limited and the website is deceiving. The atmosphere was good. We went at night and it was entirely lit up by candlelight. The service was friendly and and answered my questions and made other modifications for me regarding seafood in a lot of dishes. Not my finest pick; but we were in it for the adventure.

Incredible food in a nice part of town. The papaya salad and spring rolls were insane and the curries were next level. 100% gluten free kitchen safe for celiacs.

Omg the chicken wings. and the spring rolls...

Really good spot. Have adjusted menu to be 100% gluten free. Great cocktails. Awesome staff. Try the new pork coppa and tendon puffs. Late night menu from 10 to midnight is great for night owls like myself.