I ordered the gluten-free Italian Hoagie and it was amazing. I haven’t had a real Italian Hero since being diagnosed with Celiac Disease so I hopped on the opportunity to try one. Delivery was easy and efficient. The sandwich was so big, but so good I finished the whole thing in one sitting. The bread was fantastic and the other ingredients make it a spectacular sandwich. I highly recommend it. My boyfriend got a normal hamburger off of the regular menu and said it was delicious also.

EDIT: I went back again and it was just as good as the first time. Amazing.

I did not have the same experience as others. It was not the best meal I’ve ever had. We went on a Monday night and were the only patrons in the restaurant. While the server was very nice she did not know gluten free well, but did ask colleagues when we had questions she couldn’t answer. I got the GF ravioli. My husband got a non GF pasta dish. We had to send both back twice because both entrees were cold. The ravioli was also kind of crunchy/ under done. The wedge salad was served on a plate that was too small so the lettuce and bacon (very small crumbles) kept falling off the plate when I cut into the lettuce. When I asked about the blue cheese dressing being GF they couldn’t answer and offered me balsamic vinegar, which I dislike. I would think if you’re offering GF items and taking care to avoid cross contamination have a salad dressing other than BV. I did not get sick so that is a plus. It’s an attractive restaurant and I do appreciate the gluten free efforts, so I wouldn’t say don’t try it. Maybe it was an off night for the kitchen. 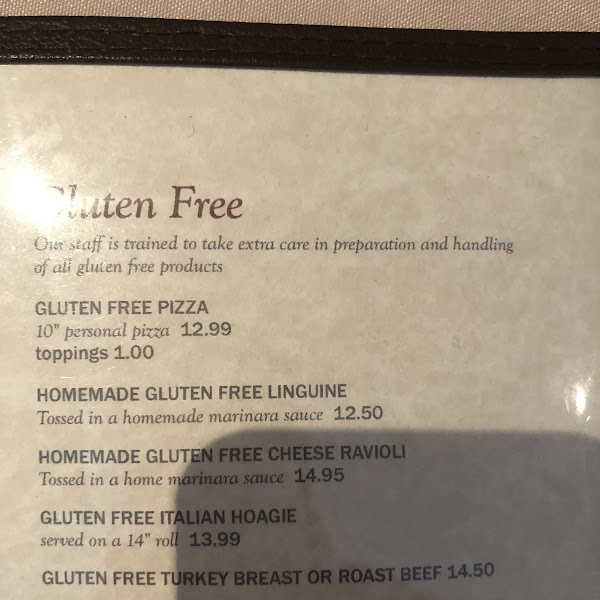 They are surprisinglt good! Our son had the GF Italian hoagie and he loved it. I had the gluten free pasta. Though the sauce and the shrimp was very good, the pasta was a bit uncooked. I think they make it there, but they need to cook it more. My son is celiac and had no reaction to the food. I am not that sensitive to be able to tell. But we confirm that on the overall we had a good experience.

went there today for the first time. I had the gluten free Italian hoagie. it was amazing. they buy the rolls from a bakery and they come in frozen so they had to bake it there. So it takes a little longer to make but well worth the wait. They appear to understand how to handle food and prevent cross contamination. will go back

I am a very sensitive Celiac who rarely eats out. I went here with friends expecting to eat only salad. To my surprise they have a GF menu where it's noted that they "take gluten free seriously and are trained to handle GF food properly" I was able to enjoy a pizza!!! I am so happy right now. I will definitely be back!!!!!!