After seeing the reviews my daughter wanted to try it. There were only 3 gf cake donuts left in the case. They said they normally receive the gf items on Sat and most sell out (they also listed cinn rolls on the menu but none avail). The donuts they had were very dry and did not taste good

They only have gf donuts sometimes, call first!!

The gf options are kept in a separate area. They had gf donuts, cinnamon rolls and pop tarts. I tried the vanilla donut and the cinnamon roll. The cinnamon roll and donut were a little dry, but had a good flavor. 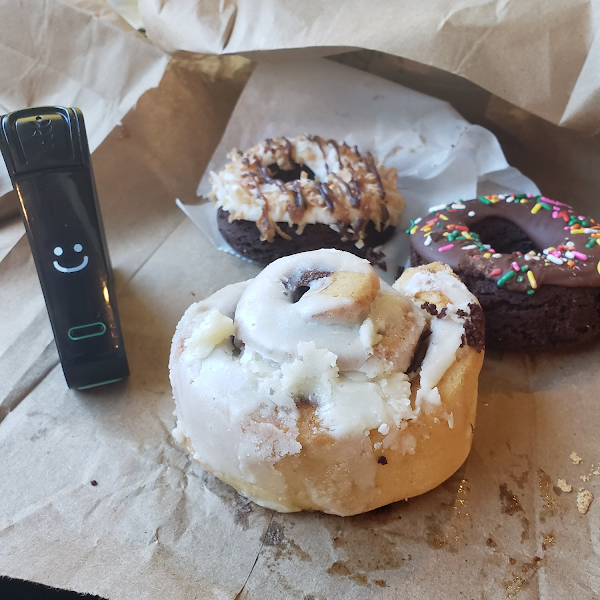 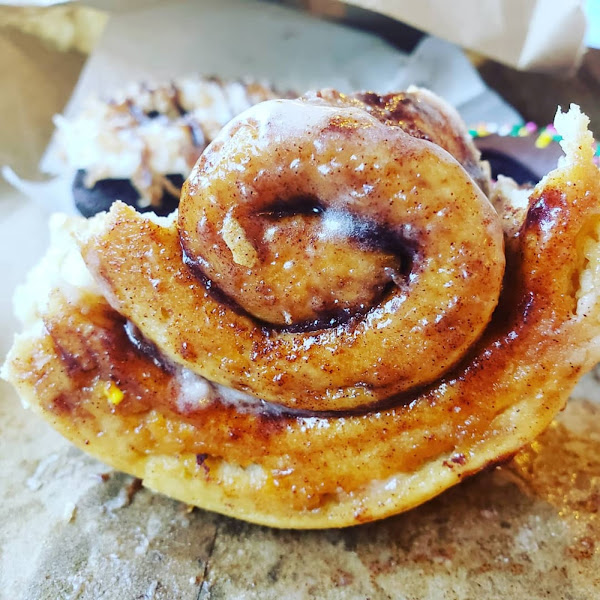 Really good! They keep the GF pastries in a separate case, and make them off site in a GF safe environment. Nice staff. Doughnuts were delicious. Can’t wait to try the cinnamon rolls and pop tarts on the weekend.

No cross contamination. Stored in a separate case and they change their gloves. All gluten free products are from Emily Kate's. If you are dead set go first thing because they can sell out. It's only happened to me once but then so I did was go to whole foods and buy the Emily Kate's stuff there (although it was frozen).

Drove all the way here only to be told they didn’t have any gluten free donuts. I guess my advice would be call first. I have 2 very disappointed people who now have to watch everyone else in our party eat donuts.

Gf is it’s own case at the front. Baked in a gf kitchen off site. I had a vanilla donut that was good and a cinnamon roll that was okay. Very small selection but they do have pop tarts if you like those and there were also chocolate and apple spice donuts. I enjoyed the treats from the mud pie coffee house more.

This place is AMAZING! Their gf donuts and cinnamon rolls are SO GOOD! Cannot believe how fantastic it is! Also, the people there are so nice and kind! I HIGHLY recommend this place and we LOVED our experience there!

Love that there are gluten-free options. They are in a separate case so there is no cross contamination.

Holy moly! This place was SO good! I got the Nutella donut and a cinnamon roll. The donut was more like a dessert donut or an only-eat-half-the-donut kind of donut. It was REALLY rich but oh so delicious lol the cinnamon roll I put in the fridge and had 2 days later and it was AMAZING!! They’re not big, they’re like the size that comes out of the can so I guess that would be like a normal size. They also keep all their gluten free stuff in a separate container so that was a plus. If I could, I would definitely go back but I live in TX and was only up here for a funeral.

So delicious, great place. Employees knowledgeable and enjoy their work. Both gf and regular options for the whole family. Definitely going again!

The donuts were great! They were kept separately from the other food items, so there was very little chance for cross contamination. I definitely recommend.

GF donuts made in a separate facility and kept in a plexiglass container. They understand cross-contamination. These are some of the best donuts I’ve ever had - not dry at all!

The donuts are made at a GF dedicated bakery and are stored in their own case.

They have a modest selection of gluten free donuts and fruit filled pastries that are made in a local gluten free bakery, and then locked in a plexiglass pastry prison safely away from all of their other baked goods :)