This is the restaurant at Bucuti which is where I stayed while in Aruba as well. I would definitely recommend eating here. They take all precautions to avoid cross contamination and are extremely knowledgeable about celiac disease and eating gluten free. Outstanding food and service. Also oceanfront!

Excellent attention to my gluten and dairy allergies. I had the best meal here the whole week I was on the island. Super service as well. Celiac and I did not get sick. Bread, crab cakes and skirt steak. Definitely go here.

This place is AMAZING! They were extremely knowledgeable about gluten and dairy allergies. Our amazing waiter, Harrison took great care and provided excellent recommendations. 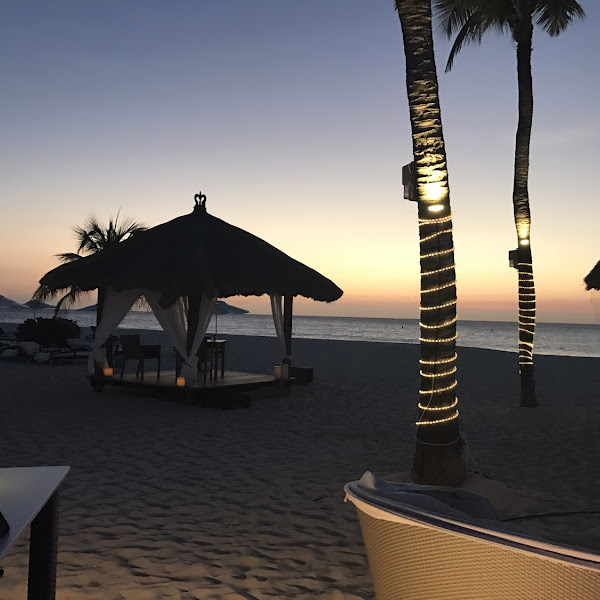 Fabulous view for dinner. The menu does have GF labels. We got the 6 course meal and were able to modify it to meet my GF needs. They did provide gluten free bread. Unfortunately did not feel super confident that our waiter understood the severity of my allergy.

Did not get sick, food was very high quality. Would likely go back again.

Amazing. GF CRABCAKES! Omg I want to go everyday! DELISH. WHAT A TREAT!

Amazing view & delicious gf food! The best that I have had on Aruba!! Crab cakes to die for! This celiac is a huge fan!

This place is so beautiful! We went here because my husband and son have Celiac disease and need to eat GF. Their menu indicates GF on it and they had lots of choices you don’t usually get to have GF (crabcakes, cheesecake, french onion soup.) My husband ordered the GF french onion soup. He took two bites/spoonfuls and a person who was not our waiter came to the table and said they had tp retrieve it as he had received the non-gf french onion soup. Wow! Now, at this point, my husband has already gotten serious cross contamination from the bread in the soup. He also now had to watch my son and I eat our appetizers while he had nothing. His GF soup was not brougt out till we were long finished our apps. Did they remove the $6.50 soup from the bill? Nope. They did give him a complimentary drink, but I can’t understand not taking the soup off-especially with how delayed it was let alone the contamination issue. Am I glad they said something? Of course! Had they not, and my hisband got sick, this would have been a one star review. It makes me nervous when a restaurant doesn’t have distinguishing dishes for GF-or a manager bring the food or both. This is a perfect example of what can happen. Be careful if you eat here. Maybe insist your actual waiter or a manager bring your food instead of a food runner who has never spoken with you.

Absolutely fantastic food - fresh healthy ingredients, and the whole menu can be modified to gf. Super safe for celiac, with very knowledgeable servers. Such a treat!

This was by far the best meal that I had in Aruba. Everything is very clearly marked, and the menu is very well thought-out. Many of the dishes are very unique and delicious. Online, they say that they have European size portions, but I found the portions to be very generous.

Elements was incredible. Yolanda made me feel extremely comfortable and assured me the meal would be prepared separately and was knowledgeable about cross contamination. I would go back tomorrow!

Stunning atmosphere, amazing gluten free food. I had crab cakes for the first time in over 5 years and delicious smoked salmon pasta. Definitely recommend this place.

Absolutely fabulous restaurant. 100% celiac friendly. As a matter of fact they cater to all allergens. Yolanda was an outstanding waitress and David, the restaurant Manager was so attentive to everyone and all dietary needs. 100% highly recommend this restaurant. We had shrimp and avocado app and crab cakes and mahi mahi and ny sirloin

Great beach front place at the bucutti resort. Gluten free menu was big and server was very aware . Brought gluten free bread and said it was prepared safely . Mentioned chef was told I had celiac and not worry. Food was great and views were awesome. Go early to watch sunset!!