Would give zero stars if I could. Staff were not prepared to identify gluten free flavors, and refused to wash a scoop to minimize the risk of cross-contamination. Ordering is a bit of a free for all and we had no confidence that they would take proper precautions, so we left rather than chance it.

I had the peach low fat yogurt and asked if it was gluten free and the answer was an immediate confident “yes!” Ice cream was good and felt confident ordering

No gluten free cones, but lots of options for ice cream

Updated 9 months ago read full review
This establishment is NOT a dedicated gluten-free facility and may not be safe for those with celiac disease. Please contact the establishment directly to inquire about safety precautions. 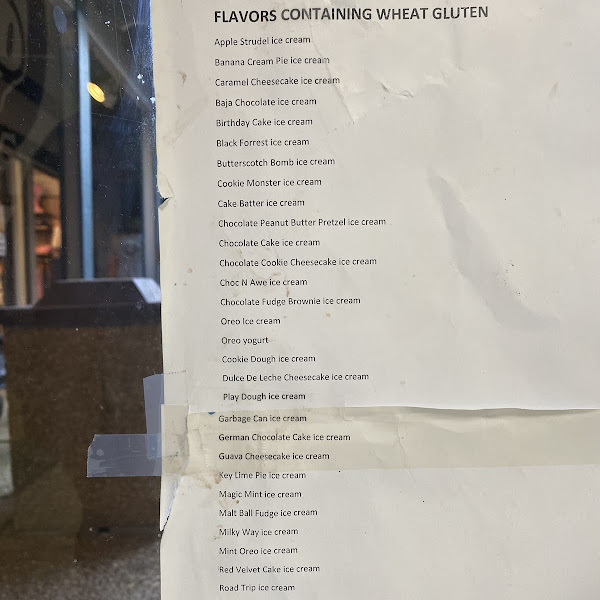 The only possibility I see if cross contamination is if an ice cream scope isn’t cleaned prior to them getting your ice cream out.

There were a lot of GFree flavor options. I wish that instead of an allergen chart saying “stay away” from these flavors it would have been a menu of what were the safe options to look at. I had to cross check between the allergen list and the list of flavors, which there is 92 of them.

I DID NOT have a reaction, BUT I did find evidence of another ice cream in the one I got. I ordered cinnamon and chocolate, and the other ice cream was blue with chocolate chip pieces from the looks of it. I am not sure if it was leftover on the scoop that was used or if it was in the cinnamon ice cream tub.

Again, didn’t get sick but I was really worried and ended up not eating a 1/4 of my ice cream. Wish I would have asked them to use a new scoop or something to prevent the leftover ice cream on it.

There is no line and you just walk up to the counter. I suggest looking at the options ahead of time and narrowing down if you experience any decision fatigue. It was VERY busy when we went into the parlor so I got ordinary flavors that I figured I would like. My boyfriend got Georgia Peach which was really tasty. I got cinnamon and chocolate which were both good as well.

I would say approach at your own risk if you have Celiac, and ask for a new clean ice cream scoop.

I went here yesterday and had ice cream with no problems! Told them I have a gluten allergy and they washed out a scooper for me. I had toasted coconut and moose tracks!