Every time I eat here I get sick within a half hour. I’m stopped testing it out after the 4th time of getting sick. It’s definitely the food. They must have serious cross contamination issues or not everything is really gluten free.

the food is great .. the wait staff is amazing... can't get gluten free fries anymore. at one point, I was told they had a separate fryer..but that's not the case now. gluten free buns, wonderful rice bowls ... haven't tried the pizza

My 5 year old (gluten sensitive) son liked their gf cheese sandwich (looked like a hamburger bun) and waffle fries. My wife and I split their gf cheese pizza (ordered as a backup plan, tasted like an Udi's crust). It was nice to have a gluten free option in a sports bar. Very family friendly. Waitstaff was very good. 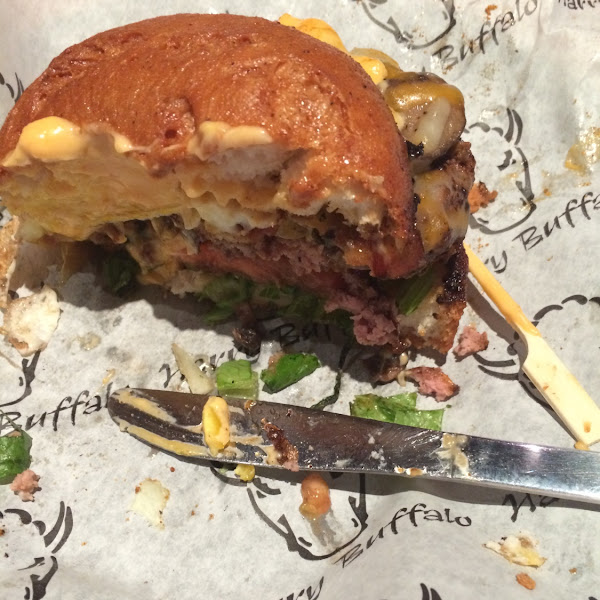 Best pizza of my life!!!

This is really a bar with food. They were out of gluten free buns and pizza crust which left a choice of bowl or salad. Parking was difficult and you could not help but see screens of wrestling everywhere you looked. Not a great experience.

The business has options, but staff has not been trained and it does not have a dedicated fryer.

No dedicated fryer on items listed as GF

Super surprised! Had delivery and I really had a panic moment because the bun was so good (still a wee bit dry and started to fall apart a bit as I ate though, so I knew it was GF).

I have eaten at HB several times and never gotten sick. I usually get the pizza or a burger but there’s many choices and they are familiar with GF! Highly recommend.

It’s nice to have GF options. However, the waitress got my order wrong and my burger was hardly cooked.

Nice choices for burgers and salads. Our server was very knowledgeable about gluten cross contamination and warned me the fries were not in a dedicated fryer, so I opted for a side salad instead. She took the time to go over what was in their salad to ensure everything was safe. I didn't get sick and had a great time.

I couldn't believe the choices. I have other major allergies and I still had a hard time picking from all of the choices! My hubby can eat anything and we shared the lettuce wraps [gf]. Wow, they were so good! I had the cilantro-pesto bowl [gf]. So good! Hubby got the fried chicken with hot honey. He loved it too! They were helpful. Pleasant atmosphere. The only problem is this is vacation and we don't have one in our state!

Had a great burger, the gf bun was good, not one of the dry and dusty ones. The server was very good and said what I could and couldn't have.

The staff need some serious etiquette and allergy training. We ate here a year ago and had a great regular cheese and pepperoni pizza on the GF crust. I have celiac disease and I did not get sick. This time, however, from the moment we arrived we had a bad vibe. Our waitress seemed like she was having a bad night and was kind of spacey. From the beginning, I stressed that I have celiac disease. I also said it was great that they added new items (which gave me confidence that they knew what they were doing). We ordered drinks, which took 15 minutes and were not what we had ordered. I asked about the BBQ sauce and whether it was gluten free, and she came back about 10 minutes later to tell us it was Sweet Baby Rays, so yes. We ordered the BBQ pizza and 30 minutes later it came out (and there was probably 5 other tables in the restaurant so it really was not that busy). I immediately noticed that the pizza was not gluten free because it was practically as thick as a deep dish from Pizza Hut. We informed our waitress, and she came back and confirmed that yes it was not the GF pizza and "thank goodness [we] noticed." My boyfriend then expressed our frustration and asked our server "why would you bring a gluten pizza when we had a 5 minute conversation about making sure the BBQ pizza was in fact gluten free on the gluten free crust? And she replied "honestly I thought we were just talking about the BBQ sauce" ... *facepalm*. Why would one inquire about GF BBQ sauce, but order a gluten crust pizza? We even said "gluten free crust" WHEN we ordered. But I digress. 20 minutes later, the GF pizza came out and it was horrible. It was obviously made in a rush and it just really tasted gross, honestly. We don't plan on returning.

They have GF options, however after eating here once I was throwing it all right back up not too long after.

I'm gluten intolerant, so I can handle some cross contamination. I haven't had any problems with anything marked GF on the menu at this location or downtown! I've had the burgers with bun, pizza and just tried the wing with honey mustard sauce tonight! the Buffalo chilli is great too! Staff did a great job double checking sauces to make sure when they weren't sure!

Burger was outstanding. Had the shroom burger with bison meat. From the meat to the bun to toppings was great. Couldn't get the fries because it's fried with the boneless wings (flour) so got the baked potato it was okay. I will return

My experience at the North Olmsted Harry Buffalo was awful. Ordered a GF chicken, rice and veggie bowl. Was served a pretzel bread stick on my plate, reiterated to the server I had celiac disease and that the breadstick contains gluten. She said "oh the cook accidentaly put that on your plate, everything else is GF." Because the breadstick was on a separate plate underneath my bowl I began eating. After eating 25% of my meal the manager came out to ask how the food was, then said he had to let me know I was served a gluten filled sauce and had hoped I hadn't eaten it. Thankfully I had not as it was in a seperate cup on the plate with the breadstick. The manager claimed the bowl was still GF, but when I got home I felt sick and had been glutened. Even if I hadn't been glutened I would never go to Harry Buffalo again. It's food is terrible, the restaurant itself leaves a lot to be desired and the staff is very poorly trained. If you have celiac disease or want good food look elsewhere.

Delicious gluten free pizza! I didn't have any issues with the waiter or experience any confusion with them about being allergic to gluten, and what that requires.

Limited options. Got the gf Cajun bowl with chicken and told them I was gf. It came out with a pretzel breadstick on top and the waitress was confused as to why that is a problem. The food was okay but as a celiac they make me nervous.

Yummy gluten free pizza. Only note is the 1 topping that comes with it was used very sparingly.

The menu was clearly labeled Gluten free, however, when food came and I asked about the house made chips they said hey we're pretty sure they were gluten free. When I asked if they were fried in a common fryer they said yes, meaning they were not okay to eat. Also, pita bread was still brought along with my hummus and veggies even though I stated I had a gluten allergy. On the other hand, the food was very good and I did not get sick. Just make sure you ask questions!

They have a lot of GF options available including an exceptionally delicious GF pizza and GF buns for all burgers. Because of the variety I eat here at least once a week.

The best burger EVER, on a lettuce "bun" of course