Beware that even though they are on the gluten free menu, fries are not in a designated fryer. The only seasonings that are gluten free are butter and garlic.

Anthony was our server and he was great and knowledgeable about GF! 3 of us in our party were celiac. We had snow crab, scallops, baked potato, and a hot dog with no bun (for a child) ...no one got sick and everyone enjoyed their food. It’s a very casual atmosphere but fun to see all the celebrities that have eaten there. Whether or not it’s a tourist trap -you decide, but they’ve definitely served many people over the years, many of which continue to return.

Not safe for celiacs. After owner came over, went over the gluten free menu with us and made recommendations, we ordered per his advice. The Caesar salad came out loaded with croutons. The waitress was clueless croutons had gluten, even though we informed her I was celiac and we asked for no croutons. She took the salad back and took the croutons out because we found multiple little pieces left in the salad. When we tried to return it she said she had made it herself so she knew it didn’t have croutons, then she immediately said the salad came prepare all together, then she said she must have mixed it in a bowl they used to mix the other salad with croutons. Total backtracking! Waitress and staff have zero knowledge of Celiac, therefore I rate this restaurant unsafe for Celiacs. 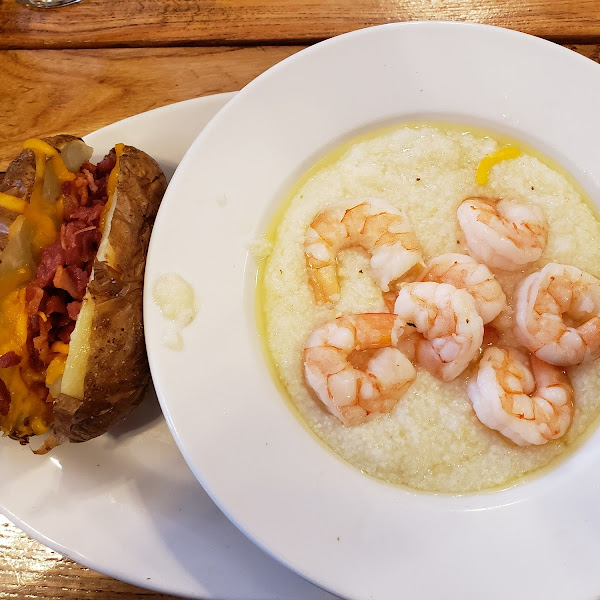 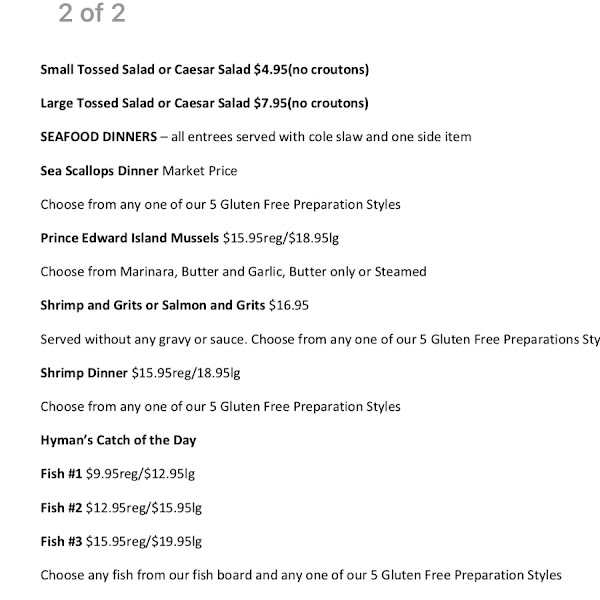 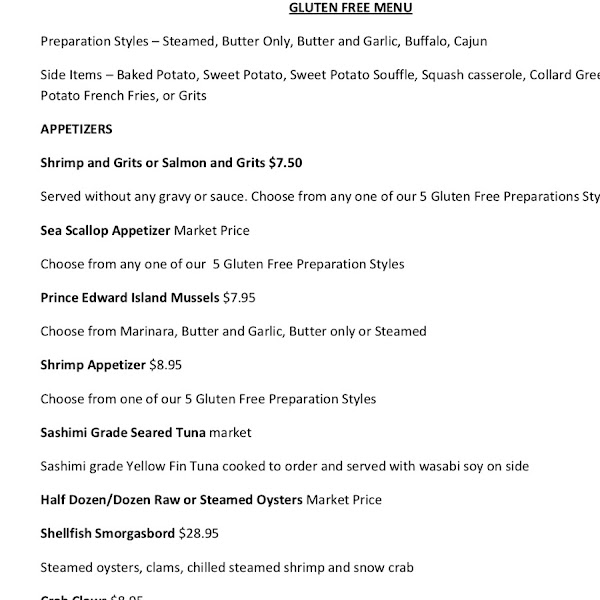 You'll miss out on all the good stuff. My shrimp and grits were instant grits with steamed shrimp. As we talked to other locals they laughed at us for going to such a tourist trap. The swamp fox shrimp and grits was a million times better

Took the risk of eating here despite reviews as it was opposite hotel. Good GF Menu (see photo) - obviously management is trying to do GF and Clean tables and Good ambience. Five hours later I was NOT glutened. BUT although our waitress and apparently the chef was knowledgable about GF - the safety process broke with the staff that plate up the food - like others my mussels was served with bread on top. My waitress immediately removed it and got me a freshly cooked replacement. I talked about this issue directly to the owner and showed him the GF safety failure pattern on the reviews - he was unaware of the process break down and acted immediately and talked about how he was going to fix the process - thanked me for my feedback. I had the distinct feeling that this issue will be fixed in future. Let’s hope so - enjoyed the food.

My husband Called and talk to the manager. He said that they handle people with celiac all the time and would have no problem cooking gluten-free options in a separate area. When we arrived, they had a gluten-free menu. However, when I got my plate of food after stressing to the waitress the importance, my food came out with hush puppies on top of it. From a customer service standpoint, the manager was nice enough to go into the kitchen and remake my food so it was safe- which was very kind. However, it just makes me unsure of if as a celiac I would trust the kitchen cooking food for me. As I’m sure this is not the first time that it happened.

Staff was fairly knowledgeable. There is a gluten-free menu. As someone mentioned years ago, the table was dirty and had a bread crumb on it.

Staff was very knowledgeable and/or found out about foods for me. Very tasty!

We had a pretty similar experience to the reviewer who mentioned the bread in the mussels - seated at a dirty table, had to request it be wiped down, and after multiple explanations about having Celiac disease and making sure the kitchen was fully aware, acknowledgement that the server understood, we were presented with mussels that had big pieces of bread shoved around the edges of the bowl. After explaining to the server, again, that we could not eat the mussels because they were now contaminated with the bread, he proceeded to just pull the bread out of the bowls and hand them back to us. At that point, we asked for the manager, explained AGAIN about having Celiac, not being able to have gluten, and avoiding cross-contamination, the manager sent our food back to the kitchen. I was assured that the new bowls that were brought out to us were not the same ones we had previously received with the bread in them, however my daughter and I were both sick after the meal. If you have Celiac disease, I would avoid this place like the plague. Even without Celiac disease, the restaurant is dirty, loud, and the service was lousy.

Possibly the worst dining experience I've ever had at a restaurant that advertises a gluten free menu. I am awake at 2 am to tell you about it because I got poisoned.

After the hostess showed us to our seats (at a table that obviously hadn't been wiped down) I asked for a gluten free menu. While she got that I used the regular menu to corral all the bread crumbs on the table into a central location and asked if she would wipe it down when she returned because I was very allergic to bread. She picked up the biggest crumbs and that was it - never wiped it down with a rag or anything. I had to use my own napkin to wipe up all the water spots and remaining crumbs.

I ordered the mussels and asked they be extra diligent as I was very sensitive. "Wow really? That sucks," the waiter replied. We never got our appetizer and my mussels showed up without the sauce and with bread. The guy picked the bread up off the mussels and handed it to me. I hate to be a pain in a restaurant but since it didn't have the sauce it was supposed to come with it was easy to send back. It came back out with bread again.

While our server never did manage to bring us out missing appetizer or get my order right, he did spend lots of time telling us about the bugs he had on his feet that wouldn't go away, getting a DUI and getting beaten up by four guys on his birthday, his bout with chlamidya (in pretty graphic detail) and how he got lap dances for free from strippers. We all laughed uncomfortably because we didn't know what to do but he was oblivious.

Twice more throughout the meal he let me know "it must suck to be you" to be so sensitive to gluten. No sir, it will suck to be you when I write the owners a letter.

The menu is robust. Service was horrible. Food was not spectacular. I got the scallops at "market price". Not impressed. Good place if you like that southern type fried like foods. I have never been a fan, but one of the only local restaurants that offer a gluten free menu that doesn't require fancy clothes and a black credit card. Update: I for sure got glutened. On my way home now and the wrath of gluten is starting.

I'm a local and I eat there. food is good. great menu

Really good food, fun environment and good service (at bar). They have a robust GF menu, just missing cider and dessert. I had the scallops and they were delicious. Will definitely be back.

Dedicated gluten free menu! Best seafood in Charleston. We are local and have been eating here forever. Super celiac friendly!