I go there often and have always had positive experiences. The service is a bit slow, so don’t go there if you’re in a hurry. I love their shrimp pho. The wait staff has always been very helpful in identifying what is gluten free and if they don’t know they’ll ask the chef.

First visit to this restaurant. I chose it specifically because they accommodate GF diets. Food was good, minus one dish in our order being prepared incorrectly with spice, and another being requested intentionally at a level 2 heat, but which ended up being too spicy. The reason for the low rating here has to do with service. The restaurant was not crowded when we arrived, so our party of 5 was seated immediately. It took about 20 minutes for someone to take our orders after water was brought out for the table. Unsure whether they were short-staffed or not, but it might have been longer had we not requested our waitperson to come over. We ordered two appetizers - one came out almost 30 minutes AFTER our order was taken; the other was forgotten. Our entrees were served almost 30 minutes after that! Second appetizer came out 20 minutes into entree service, but not before a gentle reminder. The incorrectly prepared meal was sent back after few spoonfuls (a soup dish with noodles and shrimp). It was simply too spicy and not very appetizing. Our waitress said a new dish could be subbed or the same dish remade. I opted for a new dish, which was brought out 10 minutes later. Shortly after that we were informed by another person on staff that we would be charged for half the meal because it was more than half eaten (...their "policy," though unadvertised anywhere). Had I truly consumed half the food, I might have been less incredulous about the situation. I'm not one to send things back on a whim or be unfair. I contemplated just sticking with the meal, but I suffer from reflux and felt I'd be more uncomfortable if I kept with it. Had I realized I would be charged, I wouldn't have ordered the new dish. I'm more floored about the way this was handled. Slow service, forgotten and mis-prepared orders, and poor communication of "policies" would have been cause for a price adjustment where I'm from ... and I wouldn't have had to ask. So, if you're on a schedule, this may not be your place, and if you don't care for the food, act decisively within a spoonful! 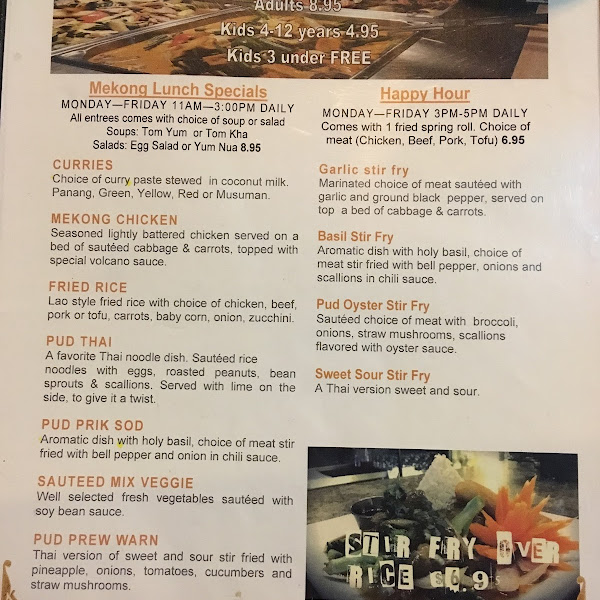 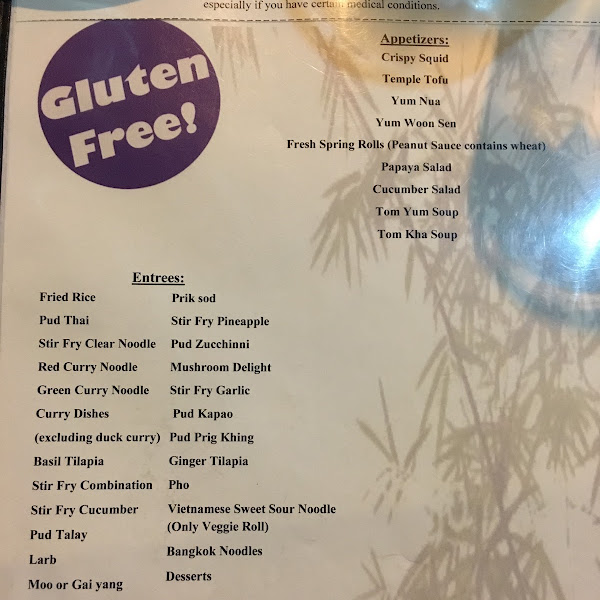 The panang curry is amazing! They've been very knowledgeable about what's GF. I've never gotten sick after eating there and getting carry out lots of times.

Super yummy Lao-Thai restaurant. They have a GF menu in house, but if you call they can walk you through it. They also have some fantastic vegan and vegetarian options.