Great place to eat at. The cashiers and must of the staff are high school kids. Their gf pizzas ate amazing. You do have to be very careful eating here if you have an allergy. They have messed up our order a few times. The owner/manger corrected the mistake, but be aware the cooks do not care about allergy (from what I've seen).

The spelled gluten wrong on their menu. They do however guarantee their other items to be glutton free, so I know no major fatties are eating it ;) 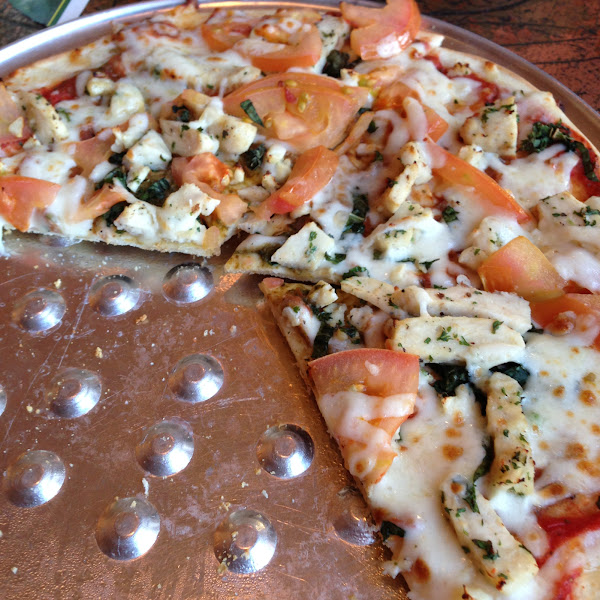 The pasta was awful. I ordered the eggplant parmesan and it was black. It was not even fresh. My kids ordered pastas as well and they actually got so sick. Not a real italian restaurant. I do not recommend this place.

While we were waiting at the counter for him to return with the manager, I noticed their huge sign on the front of the counter, showing they had gluten free options, along with a huge GF symbol, with several publications/companies giving their stamp of approval.

The manager arrived, and informed me that they only have two sizes in pizza crusts that are gluten free, small and large. He went on, however, saying that none of the toppings they had are gluten free, except the veggies. This included no gluten free meats, cheeses, or sauce.

He said he could make me a gluten free pizza crust, with only veggies, if I really needed gluten free. He mentioned that he could have lied about their pizzas being gluten free, and served it anyway.

I thanked him for his honesty, but said they needed to remove all signage and listings as being gluten free. Or, they could actually serve food that was gluten free, to protect their customers.

He said he would suggest that to the owner.

This seems like it should be illegal. These are food allergies we are talking about, and willfully misrepresenting cam harm people.

We left, and went next door to Boomer Jack's, which was gluten free. However, they did have a couple of incorrect items on the menu, and the waitress was able to tell me about them not actually being gluten free.

Please do not eat at Mogio's Gourmet Pizza if you have gluten sensitivities, and definitely DO NOT eat here if you have celiac!

Even if they do get gluten free ingredients, they do not have the kitchen to do anything but cross contaminate in my opinion.

Be wary of eateries that do not have clearly marked menu's or special gluten free menus. You can always ask to inspect their kitchen and food prep areas.

The GF crust was very good, and the staff was very helpful with letting us know what was and wasn't gluten free. For the record, they do have a GF ziti noodle but the Alfredo sauce is not GF.

It's pizza. I could make at home with a frozen crust. But hey they are there for when I'm out and about. Someone thrill me with a regular crust GF pizza and not a thin crust and ill give it 5 stars

Good thin crust pizza. Can have any of the pizzas put on gluten free crust.