Tested food I was told was Gf with Nema gluten free tester came out positive for gluten. Unsafe. Cross contamination. Not recommended. They do warn their kitchen is not celiac friendly this confirms even salads / meat without buns cannot be trusted.

I almost didn’t eat here because of some of the reviews. I had the turkey sandwich and veggies which I enjoyed. I also had the chocolate cake. I will definitely be ordering from here again. 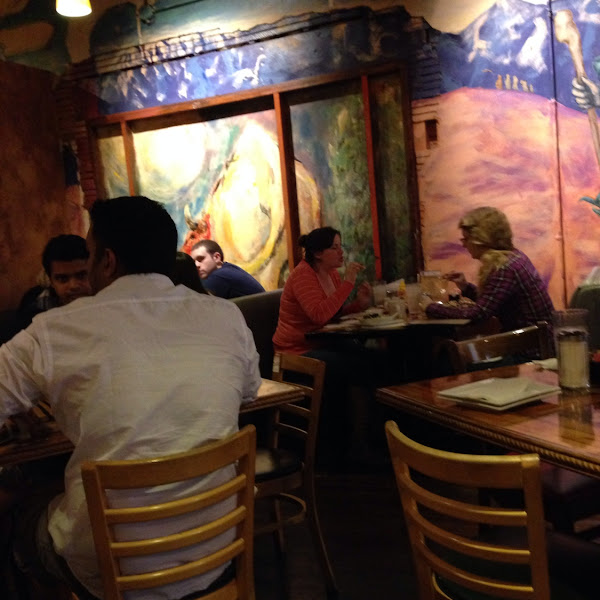 Over rated and very expensive

This is our second time here and I still remember the awesome fish tacos that they baked instead of frying last time.

I was very conflicted but decided on the Gluten free veggie pizza with pesto sauce was amazing. I ate 3/4 of it!!

Sadly, One World has gone down hill significantly. For years, it was one of my favorites, but I'm sad to say that I think I'm done going there.

The second to last time I was there, I ordered the eggplant lasagna, which is entirely gluten free except for the side of bread that comes with it. I explained to the server that I have a medical need to eat gluten free and that I needed the gluten free bread. My eggplant lasagna came out with the regular bread right on top; I only knew because I'd had that dish before and knew what the gluten free bread looked like. I could have easily eaten the bread not knowing that it was regular bread. The person who brought me my dish just grabbed the bread off the top of my food and expected that I'd still eat it; she seemed put out when I explained that I'd need a new one made. I had a new one made and thankfully did not get sick.

Then, the last time I went was with a group for my birthday (8 people total), including my brother in law who also has celiac disease. One World has loaded fries as an appetizer, and they also have baked fries that are gluten free, so I've ordered the appetizer but with baked fries instead of fried fries many times without a problem. The loaded fries normally come with a cheese sauce that does not taste very good, so I always ask for shredded cheese instead. Every time I've done this, the server has agreed that the liquid cheese is gross (I think it tastes like vomit to be honest), so I'm not sure why they still serve it, but I digress. I explained to the server that it was very important that we get the baked fries and she said she noted it and put an allergen alert on the order as well.

We got the appetizer and I took one bite of a fry that was about an inch long and knew right away that it was too greasy to have been baked. Unfortunately, my brother in law also took a bite at the same time so I couldn't spare him from getting sick. We immediately told our server, and she kept insisting that the kitchen said that the fries were baked and didn't really seem concerned. But the fries were dripping in grease, and eventually she admitted that she'd worked there for a long time and had never seen baked fries look greasy like ours. Eventually it came out that perhaps the kitchen considered our fries to be "baked" because they'd melted the cheese on them in the oven, but that was only AFTER they'd been fried.

As the incident was unfolding, the closest a manager (or who I think was the manager, anyway) came to talking to me was by standing about 20 feet away from our table and pointing at me while talking to the server. He never came to talk to us and we got a half-hearted apology from the server. We also didn't even get the fries comped from our bill.

We eventually did get a correct order of baked loaded fries, and they were not greasy at all; that was when the server acknowledged that there is no way the first order was baked.

I've had incidents occur at restaurants before, but this was by far the weakest response I've ever seen. When other restaurants were profusely apologetic, explained actions they would take to ensure it didn't happen again, comped the contaminated food, and even gave gift certificates, I've always given those restaurants another chance. 100% of the time I've had issues at other restaurants, the manager has come to talk to me and has been profusely apologetic; that did not happen at One World after either of the last two incidents I had there, which leads me to believe that they don't really care.

I'm sad that things have gone down hill there, at least for we gluten free folks. This was the sickest I've ever gotten from gluten cross contamination; I'm a stay-at-home-mom and my husband had to take off two days from work to care for our children because I was unable to do so. I was sick for a full week.

Sorry for the wall of text, I put in paragraphs but it isn't showing them.

They had GF options on easily marked on menu. Our waiter on the other hand was thoroughly confused when I ordered GF and explained that I couldn't have gluten. Due to this I had a hard time enjoying my food because I feared getting sick. Alas, I did not get sick so someone knew what they were doing.

Gluten friendly and the pizza is yummy! They work hard on minimizing cross contamination whenever possible. There's a decent amount of variety on their menu for any dietary restriction.

On New Year's Eve I had the eggplant lasagna, salad, and gluten-free bread. It was delicious! Thank-you!

I ordered the gluten-free chocolate cake, but instead received the normal cake. I had not found out that it was the wrong kind until after I finished it. I am extremely sensitive, so this caused a severe reaction. Other than that, the food was good. They did bring me the gluten-free bread as I had asked. Just be sure to ask multiple times if the food is safe.

Our waitress was fantastic and helpful when it came to choosing gluten free options!! They even toasted gluten free bread for our daughter to have with hummus! Wonderful food, highly recommend!!!

The spinach artichoke dip was AMAZING!! They toasted lots of gf bread to go with it. I also had the Cuban sandwich (pulled pork) which was also super tasty, on gf bread. I have celiac disease and had no issues with either dish.

This place has great food and can accommodate celiacs! Excellent gluten free pizza crust and the scrambles come in individually bake dishes! The fryer is shared with gluten items, but the bakery has some excellent gluten free goodies! I will definitely come back!

Excellent!! Gluten free pizza --ANY kind of toppings OR pick one of their special pizzas. Gluten free fish tacos were very good. Both members of this meal were happy with the food, the wait staff, and the price of the dinner. Very good. The wait staff understood about gluten free, the cook did some special prep for the fish tacos to keep it gluten free. If I am in the area again I will definitely eat at One World Cafe!

Very happy with my meal and services . Would come back !!

Tried the gf Alfredo pizza and it was excellent. We went there during a very busy time and they were still great! Will be going back again!

Yummy!! I really liked how many options I had. I picked a Spinach & Tomato Alfredo Gluten Free Pizza and for desert had an amazing flourless chocolate cake with raspberry sauce. ( very rich!) I would definitely come here again!

I love this place! They will substitute gluten-free bread for no extra Charge and have a very nice variety of choices that are gluten free.

Not impressed at all! I liked one world before I had to go GF. However, their staff is not knowledgable about gluten sensitivity or their GF menu items. One waitress even asked me to explain to her what gluten was when I asked about the menu items and sides that were GF. This made me very nervous! I don't feel comfortable returning.

Great GF pizza and salads! Haven't tried the stuffed pepper or thai noodle dish but nice to know there are other GF options. Awesome drinks and smoothies too...great hummus, they can serve with tortilla chips instead. Cool local restaurant to visit in P-town.