I had high hopes when dining here but BEWARE if you don’t eat onions this restaurant is very unaccommodating. I have an onion intolerance along with gluten. I was able to eat the house salad with house dressing and chips. That was it! Super disappointed.

I was meeting a friend in Yellow Springs and, surprisingly, had a hard time finding a place with a GF menu. This place had some things shown online and had OK reviews so I thought I'd give it a shot. BUSY place! When we finally got seated, I told the server that I had CD and needed to know what was safe. He was on top of this immediately! Told me what was shared in the kitchen and what was not (like the toaster, mentioned earlier). He made great suggestions, pointed out things on the menu that would work for me, and mentioned what modifications they could make. I was encouraged but still a bit wary as it was a small kitchen and even the server said they couldn't guarantee against cross-contact even though they did their best to be serious about patrons with food allergies. I always feel better when the server understands so I felt I was in good hands. Since they had Udi's, I opted for the Veggie Reuben Sandwich and the Cucumber Salad for my side. Both were made fresh. I checked the plate for anything foreign but all looked good. The sandwich was great (such a rare treat for me in a restaurant). The cucumber salad was as expected. Good. I had a really great experience and while the tea caused a sensitivity reaction (not gluten), I did not show any gluten symptoms that day and did not get sick the next. We're going back next month so hopefully I'll have another great experience.

They have UDIs bread and they use it to make French toast. Unfortunately, they dip regular bread in the batter. If you want toast, it's all shared. :-( 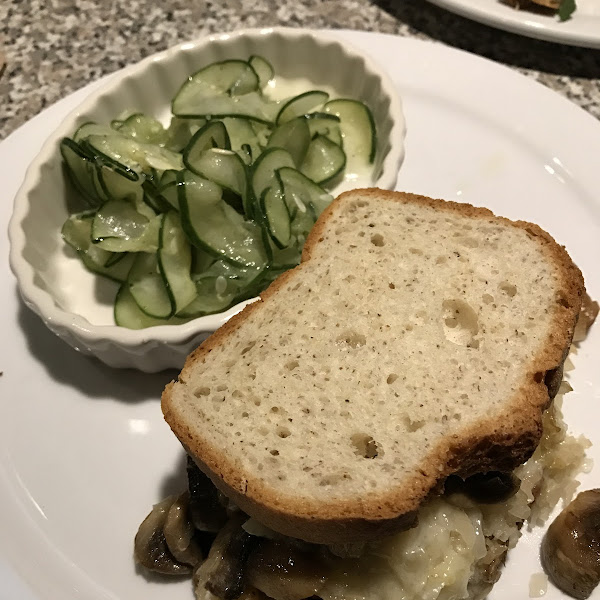