Staff were nice, the food was not. Had 3 apps. Truffle fries, stuffed pepper, and the meatballs. Meatballs were to die for. Truffle fries were supposed to be hand cut, but they were definitely from a bag and devoid of any semblance of flavor. The peppers needed a bunch of salt just to be edible. Overall quite a disappointment, especially since it seems there have been a lot of good ratings in the past. Would not recommend.

First of all it is East Main St. not West. Once we found it we love it. Gluten free menu and amazing meatballs made with ricotta instead of breadcrumbs. Excellent meal.

I'm a semi-regular here. I've never had a problem with a server not paying attention or cross contamination. The GF pizza is average (like most places, they buy a crust) but they have very good GF meatballs, pasta dishes, salads, etc.

They do not use GF bread substitutes. So if you want a burger, it will be with no bun.

They have a very good GF kids menu with more options than you sometimes get on a conventional kids menu. 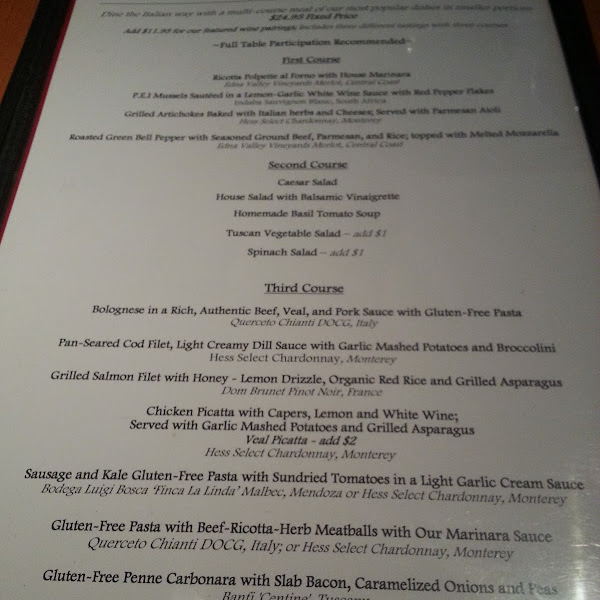 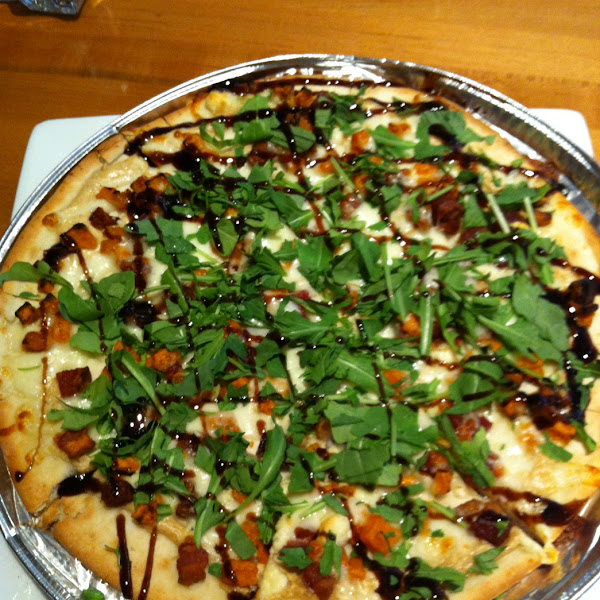 I am gf and df. They have lots of gf choices. I had chicken Marsala that was amazing. The raspberry sorbet was the consistency of ice cream. I could not believe it was gf and df. My server was great and went to the kitchen and got all my questions answered. I highly recommend this place!!

Gluten free meatballs with pasta! Very good. I'm gluten intolerant and did not get sick.

Tavolino has the most extensive gluten free menu I've seen, it is actually multiple pages! We had a very attentive server who took my need for gluten free food very seriously. She said that the restaurant takes gluten free so seriously that they had recently fired someone for failing to enter an order as gluten free. Which is unfortunate, but also very reassuring. The waitress even labelled my husband's take-out container as "gluten filled."

I had the veal saltimbocca which was very yummy and completely satisfied my Italian food craving. We also had the meatball appetizer and they were also delicious. We even tried the Cream of Pickle soup. The waitress stated that all of their soups are GF.

There was also an insert in the menu that advertised a four course GF dinner which they offer Sundays through Thursdays. I believe the price was $24.95. It looked delicious and like a really good deal, but I don't remember the specifics so please call ahead before you get your heart set on it!

Tavolino is not that great. They have a gluten free menu but my brother ordered gluten free tomato soup and they brought out regular croutons with it!! Even though they got him a new one he felt bad later that day so he must have been contaminated :(

Worth every penny and menu rotates seasonally!

Great pizza! Crust is thin, crisp not soggy. There are quite a few interesting combinations beyond a regular pizza place. So good my non-gluten free family will eat them!

Tavalinos has gone downhill something terrible. I used to go there all of the time. But, over the last six months (1-6/13), all of my visits have been poor. Mostly, it is the food that has gotten worse. For example- the bolognese had so much fennel in it, I couldn't eat it, I told the waiter who said sorry and that was it? Next time the pizza was missing an ingredient and cold, another time the bartender put sugar on the rim of my margarita and the pizza was barely warm. It's a shame but I would go somewhere else unless you don't mind paying for bad food. I haven't even mentioned how the last several waiters were very inexperienced and not prepared on the menu. Again, too bad, it used to be good.

By far the very best GF pizza I've had and frankly even better than a speciality Italian restaurant in my area. whether the crust was frozen or not it was fantastic and the thing I miss most from eating GF is thick, chewy pizza crust. this crust wasn't not paper thin and crisp. it had a little loft and was chewy. I loved it! (ps. I had the sweet potato pizza)

One of the best GF pizzas I've ever had! Definitely best one from a restaurant so far. Nice place, reasonable prices. Highly recommend.

I told the waitress that I had celiac and she quickly brought over a gf menu. I ordered the chicken parm which was delicious! I have been so violently ill since about 2hrs after eating there. Unfortunately, definitley not gf or safe for celiac.

The staff was very helpful and knowledgeable about allergies and marked my food with an “allergy stick” when I ordered.

The menu was extensive and the food tasted amazing, even those who weren’t gluten free said the pizza crust tasted great and you couldn’t tell it was gluten-free.

The hostesses disagreed about whether the GF pizza was made in a separate oven. (It’s not.) I should have taken that as a sign and walked away. I got the pizza and while it was truly delicious, I’ve been sick this entire week ever since. Getting GF pizza at a place that also does regular pizza probably isn’t a good idea. With all the flour and shared toppings and oven, it’s asking for trouble.

Lots of delicious gluten free options. The pizza is amazing, drinks are great, and I love the stuffed peppers and the grilled artichoke appetizers!!!

Had a very good meal and experience!! Waitress was amazing. Offered GF bread with oil with the other bread that came out for the table (it was just sliced bread but still nice to have something to munch on!). I ordered the chicken parm- With GF bread crumbs. Such a treat to get when eating out. Managers brought out my food and it was marked with a allergy stick. Will def go back!