We went here for dinner and I ordered the Spicy Szechuan Stir Fry with brown rice. I tested the dish with my Nima GF sensor, and the dish was not gluten free. The upside is that the staff was nice and didn’t charge me for the dish. I don’t recommend this place of your are a celiac like me.

Portions are huge, no dedicated fryer

Got the salmon and fish tacos. Waitress told kitchen about celiac. great meal and a cute spot. 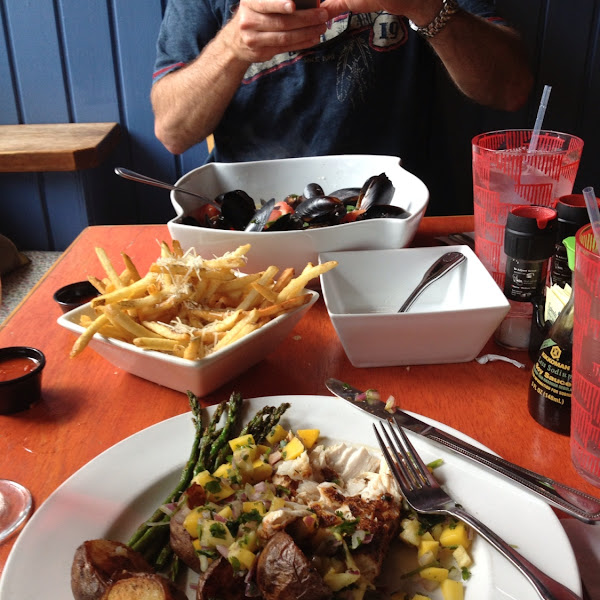 Received the wrong dish. When I questioned the waiter he said it was what I ordered and definitely gf. Turns out it was not. It wasn't what I ordered, nor was it gf. We figured it out after I had a bite or 2. I got sick. The correct gf dish was really yummy, but I don't trust them and won't eat here again.

Got the gluten free pizza and a salad and made it clear that I had celiac. Definitely got sick. I would avoid this place.

The staff was knowledgeable about gf options and they were clearly marked on the menu. There are a lot of veg/ vegan options, but no gf bread options.

Update: Fryer is not dedicated. Regular flour in the kitchen. Be careful. Cannot order the fries. Damn.The salads and mussels were fresh and delicious. They make their own cider and kombucha.

Menu marked with GF items that are not gluten free. When I asked why, the waitress informed me "well, most people aren't actually allergic, they're just on a diet." Oh......ok.

Went for lunch today & loved it!

I'd have to give this place a minus one star. I hiked over Key West to find this place beard on this app and recommends of others. I'm very disappointed as several items on menu was noted as GF but fried in same oil as other wheat products. Very, very little on menu for GF. I do not recommend this place at all.

Recommended by the hotel staff for this celiac and clean eater. Could not have been happier! The staff was well versed on gluten issues and the menu was clearly marked. My quinoa stir fry was tasty, hearty and full of shrimp, green beans, peppers, broccoli and quinoa. Also had the GF corn cake with mozzarella and GF sweet potato fries. Everything sat well in my belly. Walking in it looks like a coffee bar but don't let that fool you. The food was five star.

They took very good care of my husband here. The menu is marked for GF, not a lot of options, more salads, but enough. They also had GF beer - Greens from Belgium. Despite another review promoting the fries and rice flour only in the kitchen, when we pressed about the fries (sweet potato) and any crossover frying, the waitress came back and said best to avoid it. He had the salmon special for the day and our group shared edamame and he was fine (although still suffering from some unknown item in another supposedly GF restaurant the night before). I had Thai curry stir fry with tofu which was good but could have been a little stronger on the flavor. I also had sangria which didn't seem as watered down as elsewhere. I would recommend The Cafe as a GF dining destination and we plan to go there again at least once during our stay in Key West.

follow up: on a second visit my husband ordered a GF pizza with sausage and before placing the order the waitress checked and something about it was not GF so he ordered the pizza feature which was more veggie which turned out to be fine and he was fine.

Definitely NOT celiac friendly. I was glutened after asking several times to make sure my food would be safe. Definitely not returning

It's ok here. Things are clearly marked. Not a lot of options for appetizers and meals but had a few desserts. My stir fry tasted very bland.

Was excited to finally visit, but super disappointed that the only truly GF things they had were salads. The menu showed other items as GF but when I tried to order them they told me they didn't have a dedicated fryer so the items weren't actually GF. I ended up just getting the tomato soup. Overall a bit of a disappointment.

loved it! the grilled tofu salad was absolutely fantastic. loved every bite! they took care with my food. didn't get sick

They do not have a devoted gf deep fryer, but yet the menu states the fries etc are gf. The waitress was great to share the info, and ask celiac or intolerant. However, I loved the gf grilled portobello salad. It's a 5 star salad.

Forget it. Went for brunch and only options were salads. The omelette they said was gf turned out to contain sausage with wheat and only after I questioned the waitress numerous times. This is why I ask in the first place. Asked if I could instead have a plain omelette with tomato and feta...answer was no. Ridiculous. Don't go.

The Cafe is a mainly vegetarian restaurant located on Southard Street only minutes away from the bustling Duval Street tourist traffic. Their menu labels their gluten-free options and offers a range of choices from tasty soups and sweet potato fries to salads and Mahi-Mahi. This healthy restaurant has something for everyone and their funky décor will also make you feel right at home.

no dedicated fyer. I had the mussels and they were great. all my non- celiac friends likes it. not many choices for gf.

I loved this place until when I went there yesterday and ordered the sweet potato fries (like always) and specified that I had an allergy, the waitress came back and said that the fries are fried in the same fryer as breaded things, and asked "Is that okay?". Are you F'ing kidding me? The French fries are SPECIFICALLY MARKED "GF". And they decided to tell me about my 6th time having them. I probably got a stomach ache or had bathroom issues and assumed I ate too much, it was cleaning out my system in a good way, or that I had dairy somewhere else. I'm NEVER going here again.

A few food options, though limited to mostly salads if you're sensitive since fryers are shared. They do have GF beer though.

They cater to vegan however, they are more than accommodating for GF. Menu is marked and staff is knowledgable. Very large, delicious, and unique plates. Plus they have GF beer! If you are GF and in Key West you need to eat here.