Nice variety on the gluten free menu. Stumbled across this place for dinner. Great burger even though it was on toast. They are very careful! Food was delicious. Had breakfast the next day as well. Felt fine. I’ll be going back when I’m in Las Vegas.

My 2nd time here. I had the Henry burger with a side of fruit. Waiter was knowledgeable on celiac. Would definitely return. 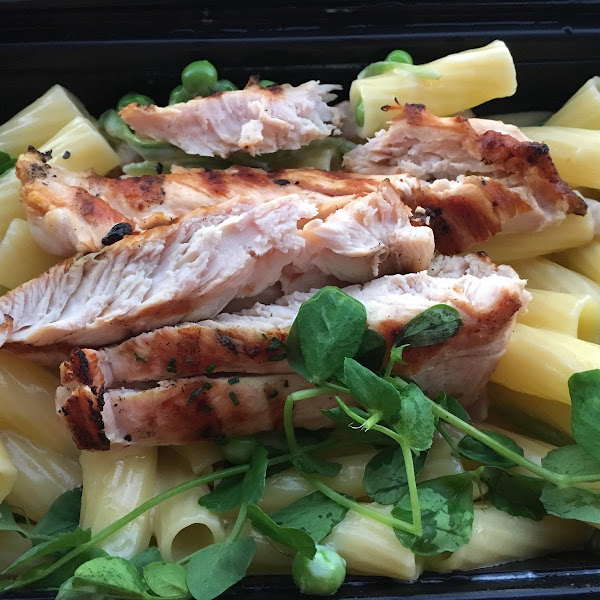 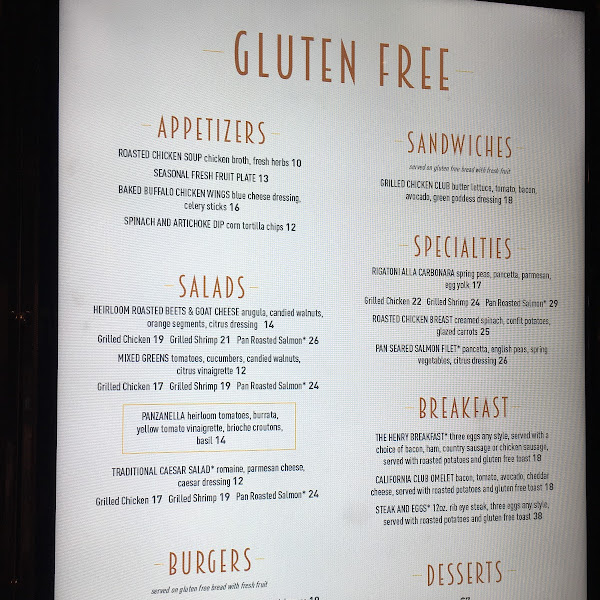 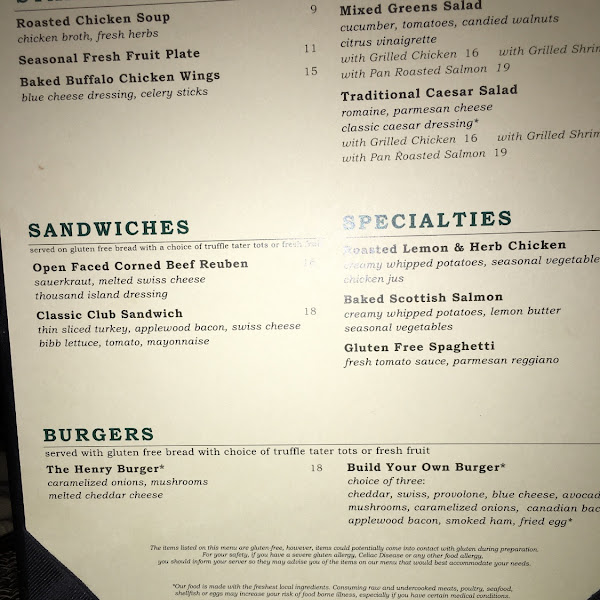 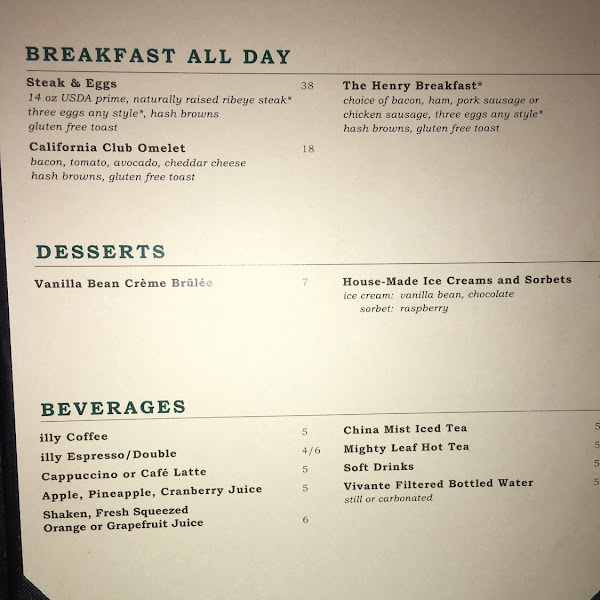 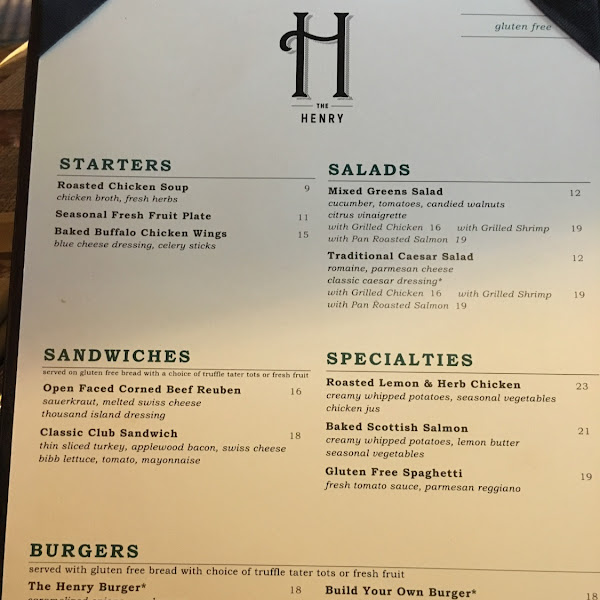 I have eaten at the Henry many times and have always had a great experience. There is a separate GF menu and the wait staff are attentive to GF needs. I have eaten breakfast- usually Omelette and GF toast, and dinner- HF pasta, club sandwich, burger, etc. The GF menu cleary states that fruit is given instead of fries or tater tots (shared fryer issues), however- you can ask for fries or tots to be BAKED!! It takes a bit longer, but so worth it! Once I ordered take out baked Tots with my meal, and when I got back to my room I looked at them and knew that they looked way too deliciously golden crispy to have been baked, so I gave them to my son. Within minutes our phone rang and it was the manager apologizing and telling me not to eat the tater tots, and that I could come back down and get my baked ones. It seems whoever packed the to-go bag just put fried tots in. When I went to get the baked tots, they also gave me a piece of cheesecake as an apology. Lol- not gluten free, but my non-celiac kids were happy to eat it. The Henry has always been a celiac safe place for me to eat without having to be nervous that I may get sick.

Had a bad experience. Ordered Salmon and Wings from GF menu. Ended up sick for most of the night.

Breakfast review: The Henry offers safe options including GF toast. I had the eggs, potatoes, toast and fruit. Everything was fresh and excellent tasting!

I went for breakfast and had scrambled eggs, bacon (BEST BACON EVER!), and potatoes, along with GF toast. I enjoyed the meal but it was a little too much $ for breakfast, I thought.

Located at the Cosmopolitan!

Everyone from the hostess to the waiter understood gluten free. They have a separate gluten free menu that has many options that include starters, salads, sandwiches w gf bread, specialities like herb chicken, gf spaghetti, & salmon, burgers w gf buns & a choice of tater tots or fruit, breakfast all day, & desserts. I read another review that wasn't good but it seems they really stepped up their game in the last 3 years.

The hostesses were completely ignorant when it came to the term gluten. The waiter seemed knowledgeable. He showed me what was safe to order. Based on his recommendations for gluten-free picks, I ordered the shrimp cocktail, the build your own burger with sharp cheddar cheese, caramelized onions, and avocado served on gluten-free bread with the truffle tater tots. The waiter suggested the tater tots because the french fries were not gluten-free. Shrimp cocktail had only three shrimp. The burger was very tasty, as were the tater tots. When I got about halfway through the tater tots, I found a french fry, confirming my fear that there was a shared fryer. I stopped eating and showed the waiter, he took the plate to the kitchen to show the chef. The waiter came back out and said that the chef told him I'd be fine and there is no reason to worry. I paid the over-priced bill, and waited in the casino area close to the bathroom. And like clockwork, within 20 minutes of eating, I bolted to the bathroom- cramps, bloating, gas, the big D. When I got out of the bathroom, I took my receipt up to the hostess stand and asked for the manager. I demanded a refund after explaining what happened and how sick I was feeling. The manager said that refunds are not allowed, and that I would need to make a report with Security. When Security arrived, they had me fill out an incident report and then said that the manager reminded her that refunds are not allowed. I was then told by the security guard that the manager told her that I would need to call Risk Management and report the incident again and maybe then I would receive a refund or some compensation for my discomfort. What kind of Bulls**t is that?! Manager ran and hid in the back until I was gone. I DO NOT recommend this restaurant- the kitchen staff does not take any precautions to make the food safe for gluten intolerant guests.