This was my first time here. We sat upstairs with Don who was the right amount of whit and straight information. I was very confident that my food would be handles safely at every step.

Sandwiches and pizza are offered gluten free and/or vegan.

Great pizza and cider! We had the GF mozzarella bread followed by a flight of 6 gluten free pizzas. So good! 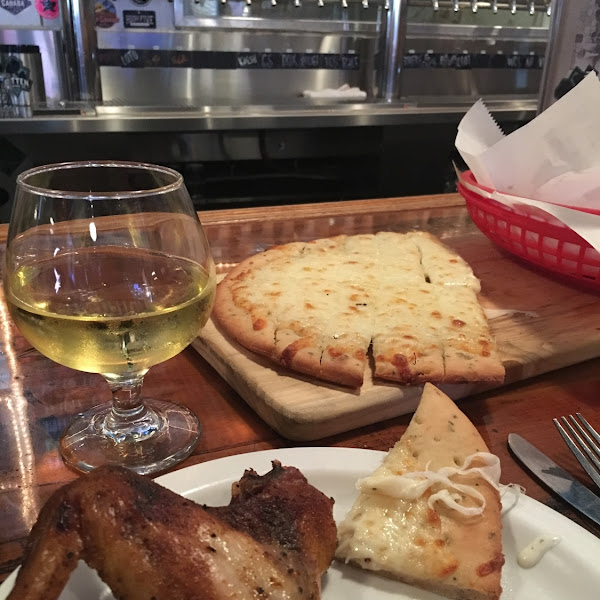 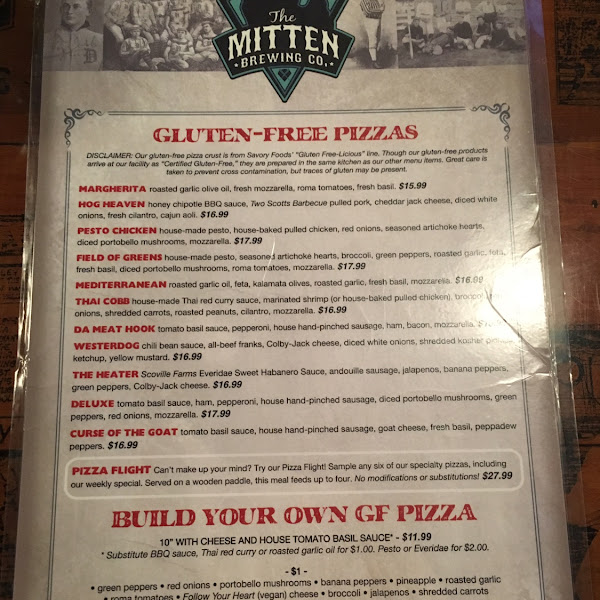 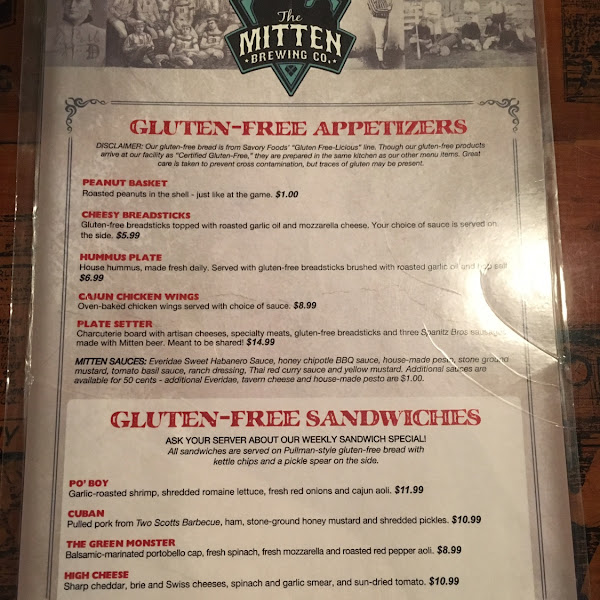 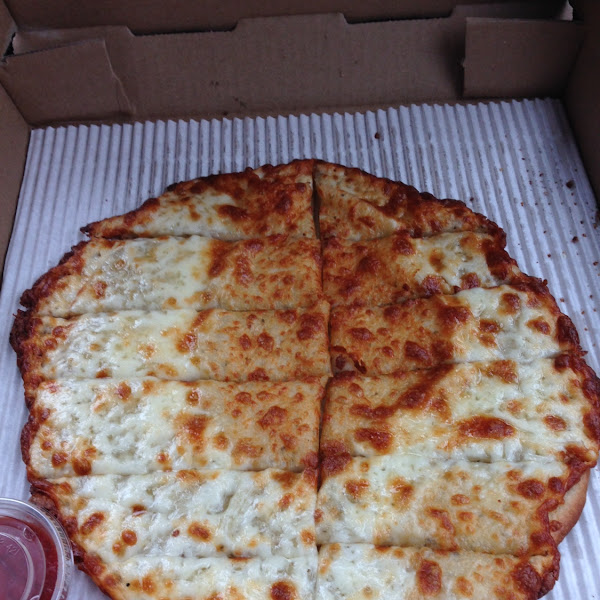 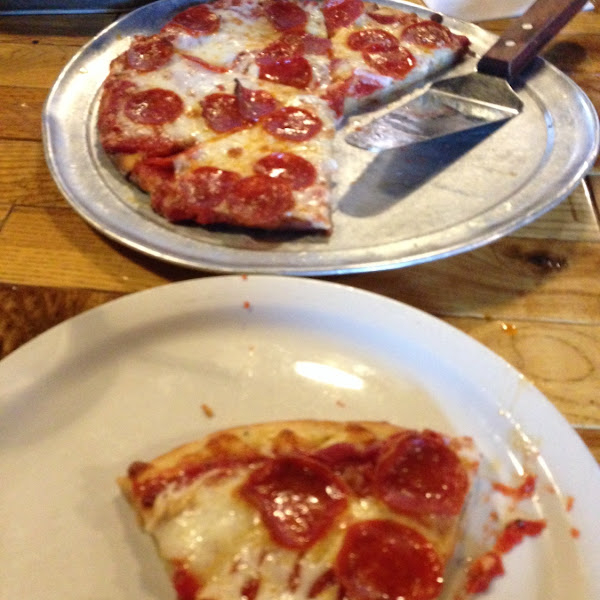 Excellent GF pizza and cheese breadsticks! So glad we went when in town. We will definitely be back. Server took care to note our allergy. There were no signs of cross contamination/did not get sick.

Best pizza in GR and I have done a LOT of trial and error to confidently say that. I have never once gotten sick from their food and they make sure to mark celiac for the kitchen. Their GF crust is so good and holds up very well for leftovers. Highly recommend!

My favorite GF pizza in Grand Rapids!! I am not sure about the tavern cheese, it has beer in it so I'd avoid this.

They had a great gluten free pizza and also had vegan cheese so if you have a dairy allergy as well you can still have amazing pizza! I am not celiacs but am highly sensitive to gluten and have never gotten sick here.

Great pizza and cheesy breadsticks! Never have had a problem and neither have my two Celiac kiddos!

First time there and was pleasantly surprised at how good it was. Friendly staff and great service. Many choices for gluten free. We had the pizza flight. What fun!

Best gluten free pizza! You can do a flight of six pizzas all gluten free. Super accommodating. Staff was awesome and very knowledgeable. Can’t wait to come back!

Nothing special at all. Came here because of all the great reviews but I was very disappointed. I ordered a gf pizza (which only comes in an 8 inch/personal size. The menu only mentions of 12 inch and doesn't specify that the gf pizza is 8 inch. That was irritating considering a friend and I had planned to share. The pizza had way too much sauce and not nearly enough cheese even though I put emphasis on the fact that I wanted it very cheesy. The service was poor, the waiter was inattentive. Took forever to come around and check in. Waited for water for 10 minutes. Had to get our own straws. Definitely won't be back!

They had really good gluten free cheese bread and pizza. We did a gluten free pizza flight and were not disappointed.

I had a great experience here! Almost all of their menu could be made gluten free for an upcharge. I had a gluten free dairy free pizza and it was really good! The waitress asked right away if I was celiac or just gluten free and seemed knowledgeable about cross contamination. I was able to have the sangria and they also had cider options. I will definitely return.

Excellent gf pizza. I have to be dairy free too so it’s nice to have that option as they also have df cheese. Excellent sauce as well. Look forward to coming back when we’re in the area.

We stopped here on a whim and they had a blackberry hard cider and a sangria. Staff was very friendly and understood and validated our concerns about gf pizza. We did a gf pizza flight with 6 different types. YUM! Can’t wait to eat here again!

Pizza and Bread Sticks are pretty good . Not alot of alcohol options. Only option was the sangria and that was pretty good.

Great food and didn’t get sick. Waitress did bring salad out with croutons but she quickly fixed it and made me a new salad. The gluten free cheesy bread was great too but they charge an extra $2 to make anything gluten free

Love this place! Lots of gluten free options for food and drinks (wine & cider). Best brewery to go to with your non-gluten free friends who still want their craft beer.

I have mixed feelings..I did not get sick from eating here and the food was delicious...however they have the “impossible burger” marked as being able to be made GF and vegan but the burger itself has gluten in it. I brought this up to my waitress and she talked with the kitchen staff to confirm. I hope they change it on the menu because it could get someone sick!

My 3yr old celiac got sick from the GF pizza and/or GF breadsticks. We visited this place last year on our trip to Grand Rapids with success but this year not the same luck. Within a couple of hours my little one was puking her brains out. We won’t be back which is extremely sad because she was so excited about the cheesy breadsticks.

That was the best gluten free pizza I have ever had! I have been gf for 11 years and lived in 3 different states and only one other has ever been this good. The vegan cheese was great and the vegan Italian sausage was tasty. Service was good, but some slow spots with taking our order. I had no reaction and waiter answered all my questions and double checked the sausage.

Wonderful GF pizza and customizable too!

Unique and delicious pizza! Almost all of the pizzas can be made gluten free along with sandwiches and breadsticks.

Excellent food and service! Ate with confidence and had no issues after. Menus have GF labels. Highly recommend!

The cheesy bread is absolutely amazing! They have a few different cider options as well that are excellent. Staff was very knowledgeable and I did not get sick.

Had excellent cheesy bread and pizza!

Amazing wings, gf breadsticks and gf pizza. This is a regular spot for us.

Good gluten free pizza. Bread sticks are the same dough but still nice to have that option! Good cider even though cherry isn’t my favorite.

We love the gluten free cheesy bread sticks and pizza!

Dedicated GF menu with lots of options (see my picture). Staff was friendly. Great atmosphere, good was delicious. Had the chicken wings and cheesy bread. Can't ask for more. Would definitely come back.

Excellent pizza (gluten free or regular)! The crust is one of the better GF crusts I've had. It's not gummy or chewy.

I was excited to eat here because I read the reviews on the gluten free pizza. The server said I could make any of their listed pizzas gluten free, so I ordered the Westerdog pizza on a gluten free crust, informing them I am very sensitive to gluten. After my pizza was already made, the server came over to ask once again how sensitive to gluten I was, because the bean chili base has gluten in it. Why wouldn't they mention that before making it? No apology or discount, they just said they could make me a different pizza instead, but by that time everyone else I was there with had gotten their meals. Obviously they can NOT make any pizza gluten free.

The Mitten is one of the only places in the area where a gluten-free, dairy-free person can get anything resembling a pizza, and for that they must be commended. Their gluten-free crust is quite good, as is their vegan cheese. Their cheesy bread (made of the same ingredients) was good as well!

We went during ArtPrize and it was quite noisy, but that is expected for a bar. The wait staff was friendly and helpful and there was a fun atmosphere. They didn't have any gluten-free beers when we went, but they did have cider that was quite good. Overall, it was a great experience!

This was the best GF pizza I have had! We ordered a pizza flight where we got to sample six of their pizzas.

The best gf crust I have had. And really good gf breadsticks!

The crust is so delicious!!!! Unforgettable...