I was a little skeptical at first as always due to serious food allergies. I talked to the waitress and she was very knowledgeable. I ordered the green chile breakfast enchiladas with potatoes. When it came to the table it looked so delicious and gluten filled. Well...it was HANDS DOWN the BEST breakfast I've had in a veeery long time. And guess what...no reaction! (No gluten -no peanut-no tree nut). (The hand cut potatoes are fried in a fryer just for the taters.). I honestly went up and thanked them. It was that good.

Really good food. Their GF blue corn waffles were great. They were not on a dedicated iron, so celiac folks beware, but it was super good and their disclaimer was clear. 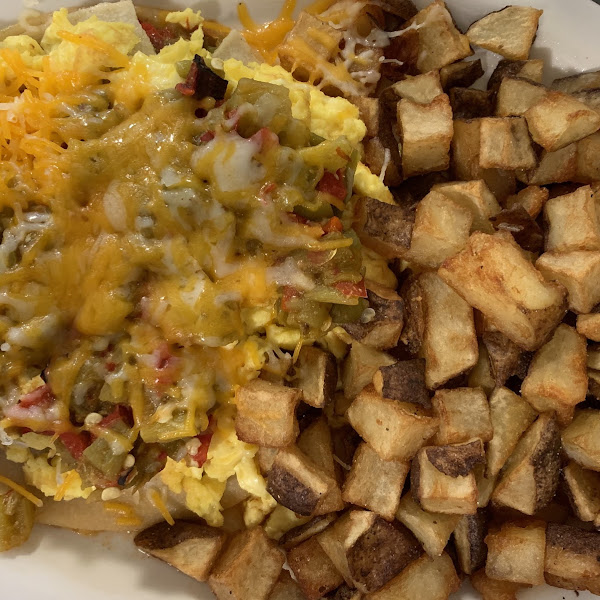 Many choices for breakfast if you are gluten free

Happy to find this gf slice of New Mexico near the airport w this app! We split the blue corn waffles with lavender whipped cream, fresh blue & strawberries; others loved the migas, kids meal w a little waffle, egg & bacon. I had the chili cheese omelette; red sauce & beans great! Green sauce a little spicy for me; next time I'll ask for it on the side. Drinks are special! Had a lovely blood orange roobois herbal, grandson had a vanilla hot chocolate. EVERYTHING we could want, all fixed to order & gluten-free. Very pretty patio area

Very good. So fun to actually get to order a gluten free waffle. The berries on the waffle were delicious. We will definitely visit again when we are passing through.

Person taking order did a great job of making sure my order would be gluten free. Talked to the owner to make sure what I ordered was gluten free. When they brought my order out they assured me that the grill was cleaned and they changed their gloves and used clean utensils to cook my order! Meal was very good!

Had a good selection of GF on their menu. Take the time to find this place if you are looking for the good SW Mexican green and red chili food.

Very good food. They worked with me on making sure my food would truly be gluten free, including letting me know that although their waffles can be GF, they are cooked in the same maker as non-GF waffles so I got the tamales instead. So much food!

Worth a stop! I had both the red and green chilies with my breakfast.

The first time we went we asked for GF sweet waffles and huevos rancheros. Both were awesome and I (have Celiac) felt great afterwards. Second time ordered GF huevos again, but the plate came with a flour tortilla on top of the potatoes. The waitress fixed it immediately and was kind and concerned. I also got the cinnamon tea- amazing. I didn't get sick and will go back again. Hopefully, it was just a one time mistake. Oh- both times they only had soy milk- were out of almond milk- as their dairy alternative. This is a bummer for me, but still, like the atmosphere, the staff, and the food.

First time, had a great 'spicy' waffle, all GF. can't wait to go back and try their lunch.

Staff is SUPER friendly and helpful, and the owner is fabulous. I love this place! I eat here regularly and have never gotten sick. They even have GF red chile!