Horrible, don’t eat here if you have Celiac. They probably didn’t even know what Celiac was and cross contamination could easily happen. They weren’t sure about the rice so I had some soy paper lettuce roll will avocado. If you are sensitive to gluten then maybe but if you have a gluten allergy at all i don’t recommend

I would warn any celiacs to avoid dining at this establishment, especially on busy times.

We read the reviews of the restaurant and were hopeful that this would work for us. Needless to say, we will not be returning.

Here are a few reasons why…

1- The restaurant was very busy, the server was NOT knowledgeable about celiac although believes she was. She also didn’t even know they had a one page GF menu. When we talked to the manager he seemed rushed and couldn’t confirm if the rice was safe. Later passed the information to the server that although the rice was GF, he was worried about cross contamination. So we couldn’t have any rice on the sushi :(. Very few sushi places can accommodate. I do understand this and we rather we safe that getting sick.

2 - We ordered a GF Boston roll which came on the same plate of other gluten containing sushi my family had ordered . The server noticed it and asked to separate and put on another plate. Then she came back and said that it didn’t touch. I politely told her, we couldn’t accept that roll as it was already placed on the platter that had gluten flakes all over. Simply transferring her roll to a new plate would not get rid of the cross-contamination.

3- They remade the GF roll and brought it on a new clean plate with “glaze on it.” Had to send it back AGAIN as the glaze had gluten. By the 3rd time the GF roll came back it was finally just “ok”. By the way we even had to go back and remind them to change their gloves which they wouldn’t have even thought of until we mentioned it. The manager had to tell the guy making the sushi to change his gloves.

4- By this time my daughter was starving and everyone else had eaten their dinner. She ordered a second roll with cooked salmon and they gave her raw salmon. By then she was just so hungry that she ate it anyways. Sadly we left disappointed with our visit.

Overall “Celiac”experience - 1 star. Thankfully after all of that, she was able to eat something and did not get sick, but had we not been on top of it, she would have for sure gotten sick.

If ordering the food to go, make sure to talk to a worker that is familiar with their gluten free accommodations. The young worker at the front did a terrible job helping me with my order. I believe it was the manager who came out and helped me by printing out the gluten free menu list of items to choose from, and he was able to replace the regular soy sauce in my order with gluten free soy sauce (the boy at the front failed to do this for me, and even told me they did not have gluten free soy sauce when I knew that they did). Anyway, we enjoyed our tuna and salmon sushi rolls and felt confident that it was gluten free, ordering based on the gluten free menu and also having the manager stepping in to assure me that everything in my order was gluten free. 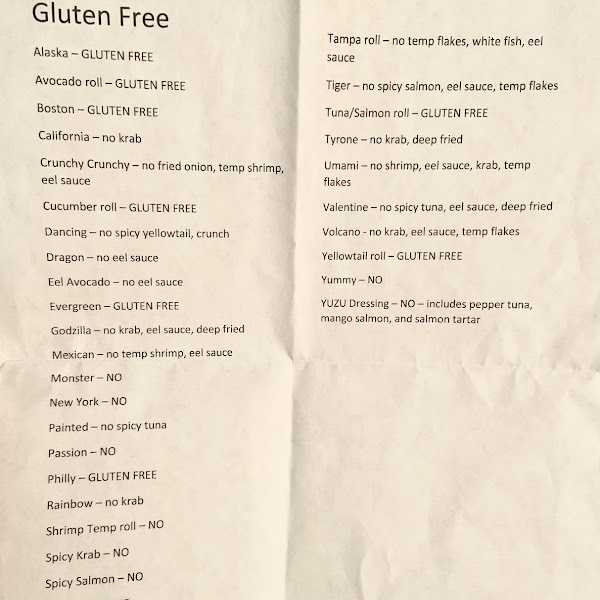 Staff was very helpful and responsive. Food was tasty. No reaction.

The GF menu is printed out and is very clear about which sushi rolls are GF and which ones can be modified to be GF. Our rolls were delicious and every request for modification was honored. The hostess was very helpful, attentive, and knowledgeable when ordering and even helped me to avoid soy as well. The ingredients are fresh! I felt safe eating it. We ordered for take out, and I felt great afterward. We will definitely order from here again.

They have a separate gluten free sushi menu (not sure of other dishes as I only got sushi), server was knowledgeable and alerted the kitchen of my allergy.