Let the waitress know I have a gluten allergy. The chef came out to talk to me about the cross contamination in the kitchen. I asked for him to just clean the prep space before making my pizza and he was happy to accommodate. Decent tasting pizza, did not get sick.

I had West End pizza on cauliflower crust. The edge of my crust were burnt and my pizza was a bit soggy. I also got sick immediately after. Wouldn’t recommend anyone with celiac to eat here.

I ate here a couple of weeks ago for lunch. I ordered the pizza with gluten free crust, Canadian bacon and pineapple. I was a little nervous because they don’t guarantee there won’t be any cross contamination. The pizza was delicious and I didn’t have a reaction. The service was fast and friendly. I wonder if it’s safer to eat early in the day before they’ve prepared a lot of regular pizzas to reduce the risk? Anyway, I will eat here again when I get the chance. 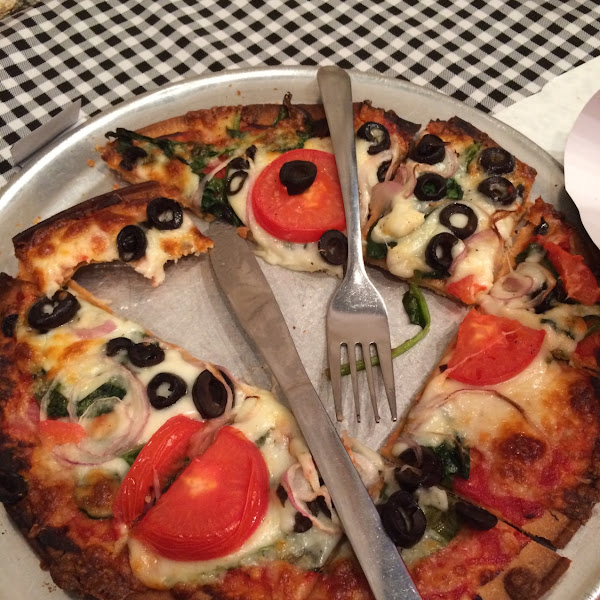 They were very honest - the pizza will be cross contaminated. The kitchen and our server recommended the penne with marinara or alfredo with a house or caeser salad. I had pasta with marinara. You can taste every veggie and spice. It was so fresh and delicious! Definitely had a Northern Italy flavor! Raspberry vinaigrette dressing, also house made, was perfect!!!!

Service was not great, but not awful. It felt like it was everyone's first night. The pasta was not good, and the only dish that could be made gluten free was the spaghetti, no other pasta dishes could be substituted I was told. The marinara was watery. The gluten free pizza was not bad, but fairly certain that contamination was very likely as was indicated as a risk on the menu. Will not be returning.

Do not have gluten free options on menu

Horrible service Was told the Italian sausage and pepperoni had gluten in it. If you have food allergies don’t go here. She told me the kitchen is very small and it may get contaminated because they are not always careful. My kids ordered the garlic knots and she looked at me and said if you have allergies you can’t eat that.... of course I do know that. Steer clear not gluten free. Just gluten free crust. It’s not our fault we have allergies.

The manager and staff was amazing. Triple checked and read off ingredients to everything. They were even accommodating to me being vegan too!! This is the second time I’ve been here and both times they went above and beyond!!! Excellent place and hidden gem :)

I've eaten the chicken Alfredo twice and both times I had to confirm with the kitchen that it was gluten free. Once it was not and they had to make me a new plate. Luckily, I have a pretty keen eye for gluten free pasta and had my husband try it first. I was right and it wasn't GF. They corrected the problem and the pasta was delicious but be careful and always double check. The service is also very slow during peak hours. The food is good though.

I got pizza with gluten free crust, which was cooked to a toasty brown. I went for the inside slices, but the crust was still tasteless and leathery. My husband said his normal pizza was comparable to frozen pizza. The redeeming factor was that our waitress, seeing my barely- eaten pizza, had its cost removed from our ticket.

Great pizza!! We had 4 different kinds of gluten free pizza and they were all delicious!

Loved the gf pizza. Had it delivered to our RV at KOA and my husband loved the non gf pizza as well. The staff was very nice.

The pizza was awesome! Had the veggie with bacon and a chefs salad with vinegar and oil. Best gf pizza I've had! Service was good and loved the ambience.

Warning!! The sauce here isn't gluten free. None of them are.

After interrogating the poor waitress, I ordered and the pizza was SO good. I chose veggie toppings because they don't tell you what meat toppings are GF. I really wanted a side salad with ranch but it's made in house and she didn't know if it was GF, so I declined. I will probably contact the owner if we travel that way again for more information.