3 ratings
Reported NOT to have a gluten-free menu, but gluten-free options may be available.
rumbi.com Menu

I mentioned that I had celiac and asked if they had gluten free teriyaki sauce. The guy said yes. I don’t know what else is gluten free—maybe they had a gf menu, but I didn’t ask. He didn’t seem to talk to anyone in the back, but it was fine. So I got a half bowl of teriyaki chicken on white rice. Haha, I also ordered my daughter a little kahuna, which looked exactly the same as mine, down to the size of container, amount of food, and sauce cup. But hers wasn’t gluten free. There was no way to distinguish which was which, so I really hoped they told me the right one was gluten free. Luckily they did. It’s several hours later and no illness. The food was pretty good. Lots of zucchini and not much broccoli—could’ve done with less zucchini. But still great. Haha, in the future I’ll order a little kahuna for myself instead of a half bowl, since it was exactly the same but less than half the price.

They are very good with cross-contamination. They don't have a lot of options, but what they do have is very yummy.

They have a gluten free menu. I have eaten there often with no issues. Unfortunately today was a disaster. I ordered a chicken and rice bowl. As always, I informed them that I have Celiac Disease and need to eat gluten free. I started eating my food and got a few bites in and there was a macaroni noodle. Not cool. I will not be eating at Rumbi again.

The staff was very knowledgeable about what was gluten-free and what they could make gluten-free just by leaving off the sauce that they usually grill it in. I had a rice bowl with Rumbi rice, tofu (cooked in a touch of oil), veggies, and gluten-free teriyaki sauce. Awesome!

Limited options, but never gotten sick and good is good. Just make sure to specify you need the gf teriyaki.

This chain now has gluten free teriyaki sauce. Stick with the rice bowls and check with the staff for safe items. They do not have a dedicated fryer so avoid fried items.

They offer gluten free teriyaki sauce and all their rice options are gluten free! My favorite is rumbi rice with grilled chicken and steamed veggies.

I had the pork and steamed veggies on rice with teriyaki sauce. The manager talked with me and offered several suggestions. It tasted amazing! I will be going again soon!

I felt like I was digesting knives after eating here.

Love the teriyaki sauce. I got the chicken and rice bowl. It was delicious!!

They have a separate gluten free menu with a good selection. I had the teriyaki rice bowl and it was yummy!! The staff was super quick with my order and pretty knowledgeable about the menu.

I like that they have a separate gf menu. The staff was friendly, helpful and knowledgeable. If you order gluten free at Rumbi, plan on waiting a while. It took them 40 min. to prepare my rice bowl. Also, ask for extra sauce. They give you a small cup of sauce that barely flavors it tastes fairly blah, and you'll need salt! I'll try it again but not for take out.

The lady that took our order and the manager were so helpful and nice. They really took the time to answer all of our questions. And, the food was great! We will definitely be eating here again!!!

Had the chicken/veggies/rice bowl with the GF teriyaki sauce. Nice to have a GF option other than pasta or pizza, but I really disliked this meal. The sauce was sickly sweet had the consistency of an artificial dessert syrup and the chicken was rubbery with pieces of chewy fat. It was equivalent to (and arguably tasted worse) than the microwaveable teriyaki bowls I used to buy from the Costco freezer section. The chicken pieces even appeared to have fake grill marks on them (but I could be wrong). Were the sauce more natural and less of a dessert sauce and the chicken actually had the taste and texture of real, freshly grilled chicken (therefore, please use natural, unprocessed chicken and grill it same day on-site), I would eat there again. As the meal is now, I won't. The owners of this restaurant should go try the chicken at places such as Chipotle and move towards that level of natural, healthy, and way better tasting food.

The staff was helpful and knew exactly how to keep the food free from gluten and cross contamination. We had teriyaki rice bowls and chips & salsa.

Love!! Make sure you get the Rumbi rice if you get a rice dish. Delish! Enjoyed the gf teriyaki sauce with my rice bowl. Will definitely be back.

They are great. Even have gluten free teriyaki sauce to have over rice.

If you're in the mood for a rice bowl, then this is a place to go. They have gluten-free teriyaki sauce, and the staff seems knowledgeable with gluten-free food. It is recommended for those with celiac disease to have the vegetables steamed. The only reason this place did not receive five stars is the extremely limited selection of food for those with Celiac disease. They do not have a dedicated menu but you will not get any funny looks from the cashier if you ask about the gluten-free options. 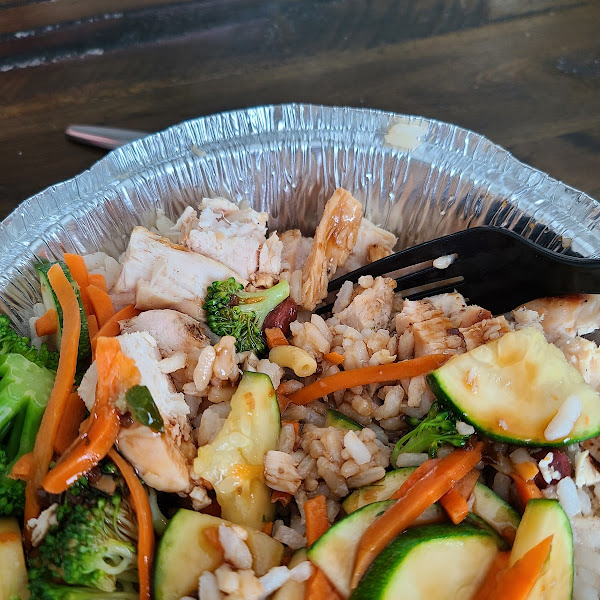