I had an awesome cinnamon roll and muffin. I had no reaction.

I loved this place! I had a cinnamon roll and lemon blueberry muffin. Be sure to get the roll warmed up so that it’s gooey. Definitely worth it! The muffin was good too but not the best muffin ever. 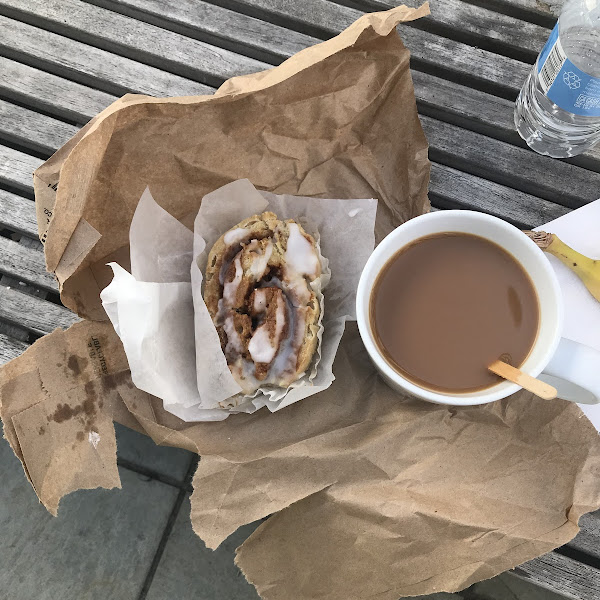 Before trying anything i asked a bunch of questions regarding their gluten free cooking protocol because they also make regular stuff in the same kitchen. I was assured they follow and very strict protocol and keep the prep areas separate but they do use the same oven but are very clean. You can see the kitchen and it looks clean and safe. Had the pumpkin cookie which was delicious and did not get sick. Will be going back for the cinnamon rolls which sell out quick.

Got a cinnamon role and tested with our Nima. Came up positive for gluten, so glad we have this tester!

There are several gf options in a case sectioned off just for them, marked by red tape. After passing by here several times over the years, I finally came across the elusive cinnamon roll that so many others have raved about. There was one left and I quickly snatched it up, had her warm it up in the paper bag as others have mentioned aaaaand... well I was actually a little disappointed. For almost $6 and all the talk, it was little more than a dense, sugary gut-bomb which I only ate half of. Gave it 4 stars cause I don’t have any gut issues celiac-wise, but definitely a sugar-rush tummy ache. I much preferred Honest Biscuits down and around the corner.

Cinnamon bun was so delicious!! First time I’d had once since my celiac diagnosis. Staff was helpful and informative.

Gluten Free bakery. Full list of ingredients at the counter!

Cinnamon rolls were to die for. Don’t care what I paid. Moist and awesome. Would recommend you ask to heat longer as just warm when they did. Ate most at home after using microwave and incredible when insides melting. Got pumpkin cookie and wasn’t worth price or even the calories. Dry. Celiac and no sickness. Those cin rolls again...😀

Cinnamon roll was fantastic. Haven’t had one since diagnosed with celiac. Thank you

We stopped by for a cinnamon roll. Ended up with 2 cinnamon rolls, lemon blueberry muffin, monster cookie and oatmeal raisin cookie. They were all very good.

If you’re visiting Seattle, DO NOT MISS THIS. Best cinnamon roll I’ve had in years. Amazing cookies. I should have bought a dozen instead of a little snack. The gluten free food is in a completely separate display case from the gluten stuff, fresh paper is used, everything is bagged separately.

It tasted great and I had no problems with it at all and I am very sensitive to gluten.

CC risk is possible if you’re a sensitive Celiac, as they use shared equipment, but take extra precautions and use specific trays and displays only for GF baked items. The muffins are amazing. I had zero issues from eating there.

Not much left in stock just before closing but the two items I got (pumpkin and monster cookie) were great. HELPFULLY, they list ingredients right next to the items so that if you have any other sensitivities the info is right there. GF items are in their own clearly marked area of the case.

We got a muffin and a cinnamon roll. Both were VERY disappointing. Dry, crumbly, flavorless. Worst cinnamon roll I have ever had. The only reason I'm giving them a generous two stars is because the saving grace was their good coffee (an easy win, in Seattle) and the good service. But neither of those are gluten free "features"... If you're looking for gluten free, you can find WAAAY better.

Staff was very helpful. Had a number of gf items but we’re almost sold out when I arrived late afternoon. Cinnamon roll and monster cookie are excellent!

I come here every time I am in Seattle for a GF monster cookie! So good :)

Shared kitchen but celiac and didn’t get sick. Con roll was so good! Hard to find.

Delicious Pastries, knowledgeable staff. I've been eating here at least once a month for 10 years, and haven't had a single instance of cross-contamination or illness.

Tasty Gluten-free items but as usual a bit on the dry side. Offers a selection of sugar-free, gluten-free and vegan cookies and pastries.

Cinnamon roll was okay but not the best I’ve ever had. Shared kitchen. Small selection. Sold out of monster cookie by 9am so go early.

They have a section of their display that is all gluten free - get a monster cookie!

Delicious gf treats and they are Celiac safe, even has a little sign saying how they keep their products safe for Celiacs. The cinnamon roll was good but the pumpkin cookie was excellent.

Holy smokes, this place is AMAZING. Pricing is what you expect for gluten free fare, but well worth it! We had the pumpkin cookie and an apple walnut muffin, which easily held both myself and my fiancé over until lunch time.

Best cinnamon rolls! They make all GF products separately (cookies, muffins, breads, scones). For once a bakery didn’t let me down!

Owner Judy went above & beyond and delivered GF goodies to our hotel. Yummy Cinnamon swirl bread, brownie and monster cookie- great texture. Awesome service! All ingredients were listed on the case when we visited in person and GF is kept in a separate case to keep it safe from cross-contamination.

Lots of options but they can run out quickly so get there early. GF baked good prepared separately. The cookies can be a bit crumbly, but are tasty, I chose to enjoy mine with coffee. This is a walk-up, nowhere to sit, so be prepared to grab and go!

I've tried the cinnamon roll and a scone, both were terribly dry, gritty, and bland (as in I couldn't finish them bad...). I appreciate having options, but I'd rather they take out the bad ones until they can fix the recipes.

I got the cinnamon roll and was not super impressed, but the options they had were so great! They kept them in a dedicated space and the staff seemed knowledgeable about it. If I had to do it again I would follow my gut and try the pumpkin cookie.

I love their GF monster cookie. They are a conventional bakery so there is gluten in the air, but they take every other precaution, including separate prep surfaces - and have a sign warning about the cross-contamination risk of airborne flour. I love the transparency and clear understanding of what a person with celiac needs to know.

Gf vegan cookie was okay, but zucchini muffin was great and cinnamon bun was the best bakery item I've ever had. Will be going back multiple times this trip.

Oh, their goodies are fantastic! I had a monster cookie as others have raved and they were right. I also got a muffin and a chocolate chip cookie. The chocolate chip cookie had an interesting spice in it, which I didn't care for. Buyer beware on that. No issues with CC even though I ate massive amounts of their baked goods over a 24 hour period.

Service was awful. They ignored us for a few minutes and never asked if we were being helped. Monster cookie was very dry.

The gf monster cookie was very tasty! It was moist which was a pleasant surprise.

I tried the pumpkin cookie and cinnamon roll. Sadly both were really dry. Not impressed

It is a shared bakery with non GF - however, they were able to convince us that their working practices were careful. We have Celiac. Had an amazing cookie, pumpkin cookie which tastes exactly like he Starbucks Pumpkin scone, and some muffins. Everyone with us loved it and no one was sick. Delicious!! Not sure that I would eat here everyday due to concern with flour in the air - but it seemed to work for this one time.

great place on pike. they had a couple vegan/ gluten free options for those with multiple allergies.

GF items were located in a separate area. The lady changed her gloves before grabbing the cookie. And both my daughter and I loved the GF Monster Cookie.