Menu is clearly marked with options that can be prepared GF. Started with Smoked Fish Spread..make sure to substitute crackers for veggies. Artichoke Smoked Gouda Fondue served with carrot sticks and cucumbers. Celiac diner had the Breast of Duck. Rest of table Herb crusted pork tenderloins and swordfish. Dessert highlight flourless torte. Maybe next time we dine here they will have GF bread for the table.

Food was delicious. No issues. Large GF options on the menu

So nice to be able to eat soup...had the gluten free seafood chowder and it was delicious! They had pasta choices, which was nice. I had the shrimp pesto pasta...the flavor was delicious, the shrimp huge, the rotini pasta was just ok as it is less forgiving when even slightly overcooked than penne pasta and fell apart in my bowl. Still a good meal though! 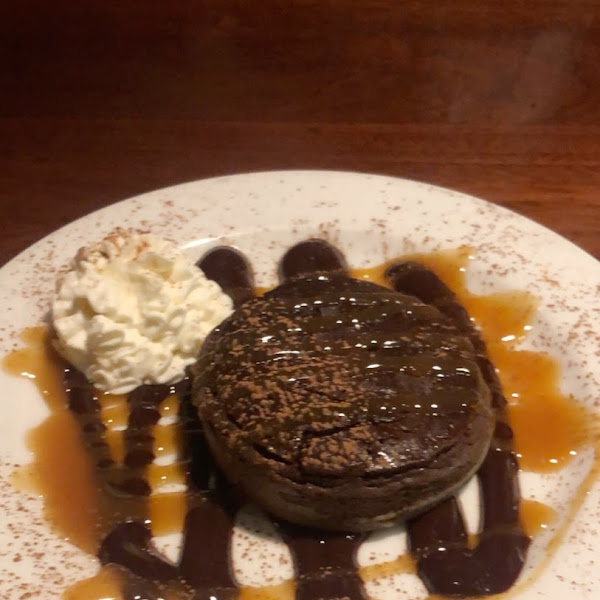 I’m surprised by the reviews saying how accommodating the staff. The waitress told my daughter the kitchen was too busy to customize her gluten free vegetable pasta order so they served it as described on the menu. My daughter is also dairy free but ended up with cheese in her meal. How can you tell someone with celiac the kitchen is too busy to care about what they’re ingesting?

The first thing our waitress asked upon greeting us was if anyone in our party had food allergies. That seems to always be a good sign. She took extra care to label our tickets. And ensure that separate utensils would be used upon cooking. I ended up really splurging for anniversary and got the king crab. And my husband got the steak. My son got fettuccine Alfredo with chicken. And he said it was so good he was worried it wasn’t gluten-free but it was and none of us had any reactions. All of their menu was clearly labeled with gluten-free items by a little icon. Are we just was very helpful. And I feel like they did a great job ensuring our meal was safe.

Our waitress was extremely helpful and the chef was very accommodating to all of my requests as I am GF and have other food sensitivities as well (garlic/onion). I had the shrimp skewers with coconut basmati rice and the flourless chocolate torte. Everything was delicious and I had no reaction! If I could give more than 5 stars I would.

Great steaks and seafood. Also had the flourless chocolate torte that was rich but very good. Server was knowledgeable.

Bartender was incredibly rude but once we got seated the waitress we had was very nice and accommodating. They completely understand celiac disease and how serious it is. She even said “we are just trying to make things easier for those who are celiac”. So maybe skip the bar & order drinks once you’re seated :)

They had several GF options marked on the menu and the staff were very helpful. I really enjoyed the scallops with coconut rice. I was disappointed they did not have a bread or dessert option, but I had a nice meal.

Great service, lovely menu. The food was tasty, fresh and they were able to accommodate gluten free and dairy free issues.

Everything was so delicious! I had a Grouper special that was Maybe the best food I ever had. Yum! It was pecan encrusted with maple, oh my!

Food was very good. They have a lot of choice on the menu. We all recommend this place! Good ambiance as well!

Ate at the bar and had a great time. King crab dinner is amazing and I split it, glad I did, very rich meal but so fresh. Feeling great today.

Decent food and they were willing to make the margarita without using the pre-made mix. Great flourless cake at the end.

I had really nice meal here. There's no GF bread and I don't think they have a dedicated fryer but options were marked GF. I had scallops for main on rice which was delicious. There were no dessert options. I can't say its the best for GF but if you pick a safe option and aren't fussed about dessert it's a really nice place. They have valet parking, we hadn't booked so had to wait for a table but we sat at the bar and had drinks with live music. It was Wednesday and they have all their bottles of wine half price, I couldn't drink it all so they seal it in a bag for you to take home.

Seemed like a newer waiter who wasn't so sure of what gluten was or how to avoid... recommended some gluten items instead of gluten free items for us to order, otherwise this would be a five star review. Five stars for the kitchen because they must understand cross contamination and gluten very very well because three course meal and I was not sick afterwards. Yay!

ate here 3 times within our week vacation. lots of gluten free choices, staff seemed knowledgeable, but quality of service and quality of food varied each time.

Never a disappointment. Very knowledgable staff and great chefs. Family is all Celiac and none of us ever get sick!

Service was good for a busy Saturday night. Food was amazing! Staff very knowledgeable of Celiac needs. I had the tuna appetizer and the Alaskan King crab dinner. Both were yummy. Will be added to my rotation of safe local restaurants to dine! Went back already April 2017... service even better this time (thanks Jenne)! Amazing celiac knowledge, she was warning me about every possible cross contamination concern... I felt as safe ordering from their menu as I do cooking in my own kitchen. Anyone with celiac knows that's a security you rarely find out!

We loved this place so much, we had dinner here twice during our vacation. The food was amazing and the staff was well aware of what it means to eat gluten free. We were impressed! We'll be back again next year.

Fantastic gluten free menu - lots of great choices! Food was fresh, nicely seasoned and perfectly cooked. The service was excellent and very knowledgeable about gluten. We will definitely be back!

I've eaten here each time I visit the area and am never disappointed. The staff provides excellent service and the food is always good. They do have many entrees on the menu marked gf and the servers always seem to know what to do. The Caesar salad dressing is yummy and gf. Definitely with a visit.

We have now vacationed in Redington Beach 3 times & every time have eaten at MGG. There are 5 to 7 of us each time & we all have very much enjoyed our food. I am not Celiac, but extremely gluten sensitive & have even ended up in the hospital a few times when I have ingested gluten. I have had no problems eating at MGG. We will definitely be eating here again.

They have a GF menu. My waitress was Jenee and she follows a GF diet so she was very helpful. I had the grilled sea bass, risotto, and asparagus and it was delicious. They offered 3 desserts however I was stuffed. I have had them in the past and they were great. I also had a delicious GF soup and loved it. I'm celiac.

They have a gluten free menu with a large selection. I had the gluten free Pasta and it was great.

AMAZING!! Went here to celebrate an anniversary and was so impressed from ambiance, food, and service, it was all impeccable. Had the artichoke Gouda fondue with celery and carrots as an appetizer, Caesar salad, and two lobster tails that were paired risotto, asparagus and other perfectly seasoned veggies. Hubby had the wasabi crusted tuna (also gf) which he said was delicious. Menu is extensive, they have apps, soups, salads, pastas, seafood, steaks and desserts all gf! I was bummed that I was too full to eat the flourless chocolate tort cake. Our server, Jason was awesome. Highest recommendation, we will be back!

Celiac and GF friendly!!! They even have several (yes I said several!) GF deserts!

Seared Tuna appetizer was special, excellent presentation. Blue Crab Cobb salad with substitute balsamic vinaigrette dressing was very good. Portion size was big, right what I was looking for. Waiter Milton was extremely knowledgeable and provided superior service.Wife had the smoked fish appetizer, the 6 oz filet and ceasars salad. Steak was cooked to perfection. As all items we had were ordered off the gluten free menu, I tried them all! I felt very comfortable eating here with a gluten allergy.

Good menu options! They ended up serving me the wrong meal, but thankfully it was still gf...the server is not the same person who delivers your meal....thus easy to have confusion. They apologized but didn't seem too concerned due to the plates both being naturally gf.

Delicious meal for both my daughter and I while on vacation. The staff was very knowledgeable and there was a decent selection from the menu!

Great restaurant. One of the best gluten free menus I've seen in awhile. Has healthy gf options for kids as well.

Delicious. Many choices including dessert. I enjoyed the shrimp skewers and coconut basmati rice. Kids options available as well. Would eat here again and again.

I was visiting the area and decided to try this place, based on 4 positive reviews on here. I'll get right to the point: GO here and enjoy! The kitchen staff and servers know how to do safe GF dining right! The food is very, very good and the menu extensive. Most importantly, this celiac is happy to say that she did not have any issues after dining there. I highly recommend this place (GF or not--as my non-GF dining companions raved about their meals as well!) Thanks to the owners for taking care of us GeeFreers! Wished I lived closer; I would go there often.

We ate there on 2 different occasions. Menu is extensive. Staff did an awesome job of checking before we ordered. Food was good and chocolate torte is amazing!

AMAZING!!! The gf menu is 2 pages long of delicious options. The waiter (Jeffrey) was wonderful and knowledgeable about gf as well. I order the seafood soup and then the grouper with rice and it was delicious and followed it up with the chocolate tort which was also amazing. You will not be disappointed, a definite yes!!!