So the first time we ordered from here it was a great experience. The customer service was great and we loved the sandwiches, including the gluten free. Unfortunately, the second time we tried to order from here we had a very bad experience. When I called and requested gluten free the gentleman on the phone said are you sure you have the right place, I don’t have gluten free subs. I thought I dialed wrong number, apologized and hung up. When I went back to website and redialed, it sounded like the same person so I asked, Is this the same place? He then hung up on me. Don’t understand what kind of business they are and certainly they also seem confused.

Great home made pizza crust, sub rolls, bread for purchase or pizza or sub prepared. Owners wife has celiac. They are great! 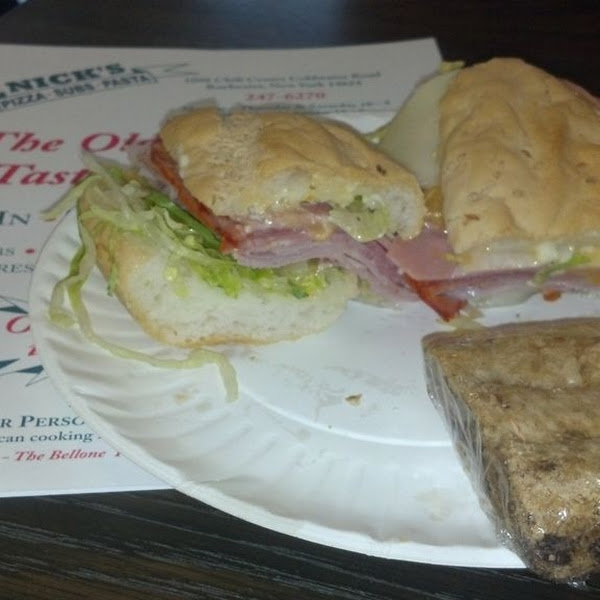 After reading all the great reviews I was very excited to grab a bite here last night. Very disappointed. Was told the only GF rolls they have were those sold in the freezer so I could not get a sandwich so I tried the GF pizza. Crust was under cooked and very bland. Plenty of GF options in freezer to take home. Maybe I should have tried one of those.

My two daughters got sick from their gluten free pizza. Tested it in our Nima sensor after the fact and it tested positive for gluten.

The food is amazing and they are so careful about gluten! I had a sub and a cream puff and they were worth every penny!

Wonderful in every way. Completely Celiac safe. The owner's wife is Celiac.

They offer a lot of gluten free options. I had a steak, mozzarella and mushroom sub that was delicious! What I love is you can buy lots of gluten free items. I bought pizza dough, sub rolls, cheese raviolis and fresh sausage.

Love getting the frozen meatballs and calzones in the freezer! This place is amazing!

Really good crust and sauce, would highly recommend. Their lasagna and chicken Park and meatballs all look great too.

Pretty fantastic experience. Had the pizza and meatballs both are fantastic. Great experience!

pizza is phenomenal I love the sauce. Also they offer amazing almond paste cookies and delicious cupcakes as well as frozen breads and pizza crust!

Tried their pizza for the first time today and it was the best gf crust I've ever had! I felt like I was cheating! The sauce is excellent, too. Nice and garlicky!

I had a very good steak sub on there gf sub bread. Also the gf cream puff was great. Definitely going back.

The worst customer service ever. I clearly ordered a gluten-free pizza with my friend. I then waited thirty minutes and they got a sub for me instead. I told Nick that I ordered a pizza, he then said try the sub and okay it is free, he then started berating the girl who got the order wrong and I then said to get him to stop "it's okay I talk fast" even though that wasn't true and I just wanted to get him to stop berating this young cashier. I hand him my card as I thought I was going to pay for the drink, he then charged me for the sub I didn't order and he said was free!

I then told him look I wanted the pizza which is what I ordered. He then said this guy talks 100 mph and he was going to charge me for both the pizza and the sub. I then said I'm not doing that and he said fine give me back the sub! Even though it was ridiculous, I gave him the sub back and waited another 30 minutes for the pizza I ordered. While I waited nick had a ten minute tantrum complaining to another older lady customer about this guy who talks so fast and was pointing at me, he then berated the young cashier girl again saying she just wanted a date and was distracted.

When I finally got the pizza, I asked him if he was really going to charge me the difference after I paid for the sub. He then lost it and said we were busting his balls, he didn't need me business, complained endlessly and threatened to kick us out. I then had to calm him down and pay for it then we left. As we were leaving he was cursing and having a baby tantrum.

This was the worst experience I have ever had at a restaurant. I am still baffled that a restaurant that made a mistake could not just own the fact he made a mistake, apologize and give it to you for free or at a discount. Instead he lost his temper and harassed customers for their mistake. NEVER GO HERE!

Tried the Chicken Bacon Ranch GF pizza and it was delicious! Also, their GF brownie was fabulous.

Delicious!! The subs, desserts and pizza that I've tried are all TOP NOTCH!! We have already brought our entire family and will stop in as often as we can! The staff is so sweet and accommodating as well. Love this place.

I go there frequently. They have a freezer full of gluten-free meals. I also buy all my bread there - closest thing to real bread.

Decided to give it a try during a soccer tournament, first time having a sub since I was diagnosed over 6 years ago, amazing, had a roast beef sub, they toast the roll, it's absolutely awesome, and I had a GF Chocolate chip cookie, which even my kids liked, and that too was delicious.

Amazing food. Love their GF subs. They have fantastic dinner rolls you can purchase frozen - I bought them last for Thanksgiving and will definitely get again.

I was diagnosed 3 months ago with Celiac disease and I had been doing great without bread, until my friend brought a delicious looking sub into work one day for lunch. That was it for me. I looked everywhere to find a place that had gluten free sub rolls. I found Nick's! I enjoyed a delicious turkey sub on a toasted sub roll and it was incredible!!! The freshly sliced meat and well made sub was such a treat! Most gluten free breads are disgusting, not the case at all! I am so pleased and can't wait to try their variety of gluten free foods.

I talked with the owners for over a half hour about gluten free and their story and the wife's owner has celiacs and really takes pride and care in making sure the gluten free food is stored and prepared separately. They have a great selection and are so accommodating and made me something gluten free not on the gluten free menu. Great prices and very friendly family. Highly recommend :)

Our favorite GF pizza, hands down. Great place for all of your homemade GF needs - from pizza and lasagne to cookies and cream puffs. This is the place!!! ❤Nick's!

Went based on the outstanding reviews here, on yelp, and on Google+.

I'll grant that the crust was chewy and it was nice not to have to chew for five minutes before swallowing but as for flavor I found it to be pretty average. Nothing I was over the moon about.

Cheese-lovers will enjoy the copious amounts of cheese that comes with a normal pie, people who want pizza little on the lighter side might want to ask them for half the amount of cheese they normally put on.

I would probably not return.

Best place around. My son loves it here! The owner is amazing and even went out of her way to make a special donut for him when his class was having them so he didn't feel left out. So so so impressed with them!

Lots of options besides pizza. We have tried their frozen chicken Parm and frozen lasagna. Both were delicious and couldn't tell it was GF.

Not only does this restaurant have a lot of gluten free choices unlike most places. The food is AMAZING! from the fresh breads to dinners, subs, pizza and dessert. Nicks is my go to place! this gluten free Italian approves!!

I drive from Fairport to come to this amazing place. The food is excellent and they have gluten free desserts also. It is celiac friendly so i would definetly come check it out!

best gluten free pizza I have ever had, I kept saying it tastes like real pizza.

Great GF pizza and other GF options. Will go back again.

Great food! I had a roast beef sub on a gf roll. Taste and texture was fantastic. Great service as well. Celiac friendly and lots of choices!

Best gf pizza in rochester. If you haven't been here I highly recommend it. The pepperoni pizza is what I treat myself with when I'm on the west side.

probably in the top three gf pizza's I've had, and I travel all over the country.

Love! Food tastes great & Nick's wife is gluten free so they get it.

This place is gluten free paradise. They make their own GF bread and it's the best I ever had. They do sub rolls too. They have staple Italian dishes, cupcake, cookies, and frozen to go dinners. They also have delicious uncooked GF pasta to buy. If you can't eat gluten, GO HERE. They are a wonderful family business.

Top notch, make their own bread and rolls , very tasty, I tried a lot this is the real deal

The best GF and soy-free pizza around!!! The family caters so thoughtfully to the GF community, constantly adding delicious new products like the tasty multi-grain bread...

The best gl free pizza around!

This was gluten-free heaven!!! No cross-contamination. On a trip & stopped to have some gluten free pizza. Both my husband and I loved it! Nick's son spent time chatting with us and shared a little of their family story. Great people! We left with Snyder's Pretzels, peanut butter and chocolate chip cookies from their bakery and a lasting impression of great food, service and hospitality:)