(631) 598-4618
parkavenuegrill.net
Reported to be doing delivery AND takeout during the COVID-19 pandemic

WARNING: I hate writing bad reviews and believe that if you don’t have something nice to say, don’t say anything at all. However, PARK AVENUE GRILL in Amityville is not a place that anyone with Celiacs should take a risk eating at. My boyfriend and I came for brunch today and I specifically asked for the gluten free menu and proceeded to order from the gluten free menu. When our food arrived, my veggie burger bun appeared to be whole wheat. I asked the waiter if it was gluten free at which point they didn’t know and they took the meal back to ask the kitchen. Had I not recognized the oats on the top of the bun and questioned the bun, I would have proceeded to eat the meal. They offered to remake the meal and it arrived as my boyfriend was finishing his (which he never finished because of a stray hair that presented itself in the syrup). The meal was not as ordered again (I asked for no mushrooms and mozzarella instead of Asiago; it came with mushrooms and no cheese) and the waitress said she would strike it from our check. When the check came and things did not add up correctly, we spoke to the owner who happened to be in the dining area. He proceeded to be arrogant, condescending, and disrespectful basically blaming me for the restaurant’s error. Mind you, the restaurant’s error could put me or someone with celiacs in a terrible health state for a week (or at least until the food gets through our system). We really wanted to like this restaurant based on the reviews from the GF community. This is the second time they have made a GF mistake for me personally. Don’t take the risk. They refuse to take responsibility when it comes to your health.

This restaurant is not only adorable, but also has DELICIOUS gf options for breakfast lunch and dinner. Yummy pancakes and chicken tenders, gf frier, and very accommodating menu!!

Great little place ...many gluten free options available and they are delicious 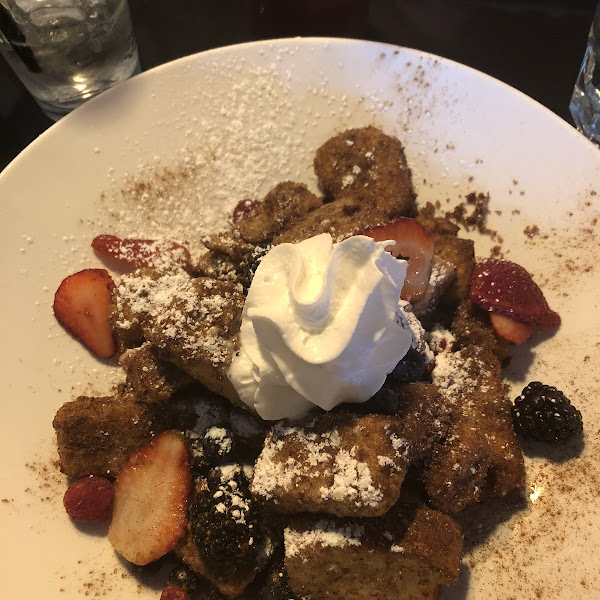 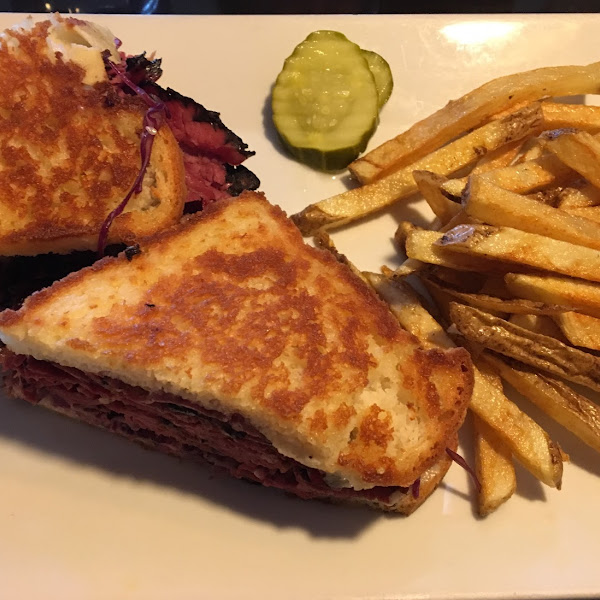 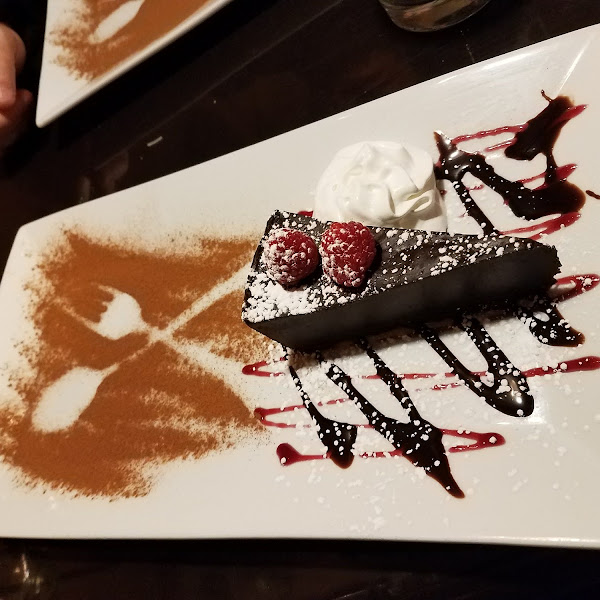 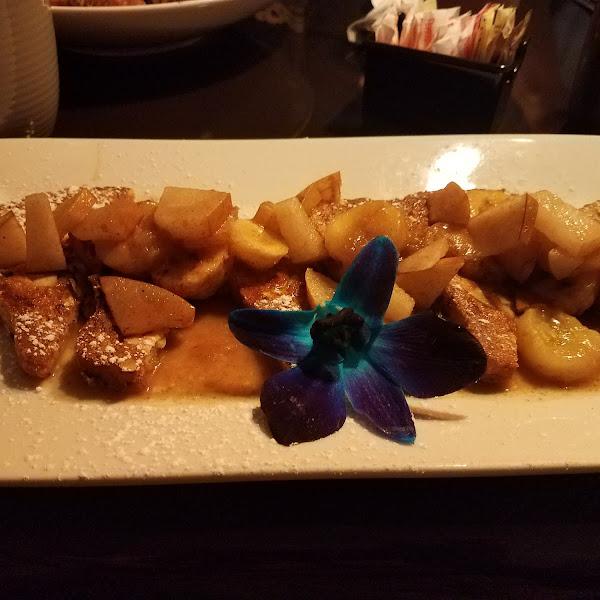 Not only are they ridiculously overpriced, but the owner became extremely nasty and actually raised her voice to me when I questioned an item in my meal. We obviously won't be going back.

Do not eat here if you have Celiac. I told the server I have celiac and even ordered from their GF menu! Thought I was safe and the next thing I know after eating the food I started vomiting. I had an allergic reaction. I thought this place was safe after seeing the reviews on here. I had a bad experience and will not consider eating here in the future.

Most Celiac Friendly place I have ever had from. We are regulars now. Love their food and the Owners are awesome and go out of their way to accommodate Celiac and GF needs.

First time there, being gluten free (celiac disease) we arrived around 230pm and had to wait about 10 min. For a party of 5. No big deal. We got called in about 5 min. I got the spicy shrimp tacos and the street fries. I had asked ahead of time on Facebook for recommendations on what to order. I was given a long list but alot of people recommended what I ordered. I'm so glad I did, those tacos had just the right amount of bite and those street fries were absolutely delicious. I cant get back there fast enough to try there other gluten free dishes.

The Food Was Amazing! Alex was so nice and was very informed about Celiac and food allergies. Definitely will be going back

Great Place! Food was delicious, service was great. My dad and myself both have gluten intolerance. I also have dairy intolerance. We were able to get gluten free French Toast, his was the almond crusted topped with fruit and nuts mine was stuffed with banana and blueberries and topped with strawberries. Both were delicious. The rest of my family who do not have food sensitivities including 2 children all thoroughly enjoyed their meals also. Amongst us we had the Loraine Omlet, the Reuben Sandwhich, the Pancake Stacks, Cheeseburgers and a simple eggs and sausage breakfast platter. Despite being a quaint establishment, they accommodated our group of 8 with no trouble. The host mentioned 99% of the menu either naturally is or could be made GF. There were also labels for DF and vegan items. They all seemed very knowledgeable and we were very comfortable. Would definitely recommend! Hope you try it out and enjoy!

Place is amazing! Just about the entire menu is or can be made GF. The staff is VERY knowledgeable and the food and service were both excellent!

The owners were SO nice! When my mother and I let them know we were gluten free, they couldn’t be more accommodating. The only thing I should add is that it was a little pricy, especially because of the gluten free surcharge. But overall a great experience and I will be back!

*My mother and I are not celiac, just gluten free by choice, so I do not know how a celiac would react to eating there.*

I’ve been here many times and it NEVER disappoints. The wait staff asks if anyone has any allergies right off the bat. I’ve had the pancakes, French toast, waffles, and omelettes, and each was more wonderful than the last. Highly recommend!

You feel at home immediately upon entering Park Ave Grill.. it’s an instant favorite. Their GF menu is extensive and delicious. Their breakfasts are my favorite and seriously to die for.

Great food. Attention to GF concerns. Dedicated fryers and separate prep area for GF food. So so good. No worries eating there

Best restaurant for me as a celiac. Only place I don’t have to have anxiety with each bite. They will do anything you want if they have the ingredients in the kitchen.

The owners are educated on celiac disease and make sure your food is not only fresh, delicious, and SAFE. This my go to place

The food was delicious. They have a separate fryer for gf food. It took a little longer to make my food because they were busy, but I appreciated them taking their time to make my food. Our waitress even gave me a $15 gift card to apologize for the time, which I didn’t even feel was long.

Wonderful experience and great food. I had the gf almond French toast with pears and cranberries. It was delicious and presentation was great. My non gf husband had baked eggs on pheasant bread and love it too. Nice friendly people. I’m just mad we didn’t find it sooner since we live so close. Definitely going back. 👍🏻👍🏻👍🏻👍🏻

Had awesome chocolate chip gluten free pancakes! Staff was knowledgeable and kind. The coffee was so good too!! Definitely recommend for a good breakfast/brunch spot!

Staff asked all the right questions, suggested all the right options and it was the most delicious meal I’ve had in a loooong time. (Vegan veggie burger on gluten free bun with air fries and GLUTEN FREE DAIRY FREE CHEESECAKE FOR DESSERT and the Almond Joy cappuccino !) 10/10

Amazing food and wonderful, educated staff. The chef came out and spoke to me directly too. I had Brie apple walnut pancakes, home fries, and the melted Swiss roast beef sandwich on an amazing gluten free bun.

The waitress was so knowledgeable about celiac disease and had tons of delicious suggestions! I've been here twice and truly wish it were closer to home!

The entire staff went out there way to make sure there was no gluten even altering specials. Very nice staff

had a horrible experience that has made me never want to return. My boyfriend and I used to be regulars, we both have Celiac. we got an order that was contaminated (regular bun) and when I called the co-owner and chef were like yeah it happened. the co-owner then proceeded to say "are you that sensitive? it is hard to find a great breakfast place that is safe and this place isn't

So expensive and the service was terrible!

I've taken my third trip today and have never been upset with the food. The best gluten free pancakes and home fries in the neighborhood. The only issues I have with this spot are the space and the service. The waitress we had today was very "keep-to-yourself"; didn't offer us too much of anything after seating us, not even a drink which is a custom at any dining experience. The space is small which is suited to what they serve, but they decorate with clutter like fake plants and other items filling up the windows and space, and their seats and tables are covered in mix-matched, ornery sheets a d stitchings that make the place seem so much smaller than it really is. Overall, it does offer a cozy seat and great food, much like how you would feel visiting your grandmother. You won't be disappointed ordering[the stack!].

Such a cute and cozy place for breakfast/brunch. Food was delicious and all made to order. Can accommodate most menu items for gluten free needs. Had pancakes and chicken quesadilla.