I have eaten here many times, in the restaurant and ordered pick-up. I am an extremely sensitive celiac and I never have any issues eating here. As long as you order from the GF menu you should be good to go!

Ate here for the first time after being diagnosed with Celiac disease. I’m happy to say I found somewhere safe to eat as I am super sensitive. I sat at the bar, asked for a GF menu, and the bartender was super friendly and knowledgeable. She explained that the kitchen prepares GF dishes in a separate area and all items on the GF menu are guaranteed to be safe. I ate the spicy chicken with brown rice and broccoli off the GF menu and had zero issues. Thank you PF Chang’s, I will be back ❤ 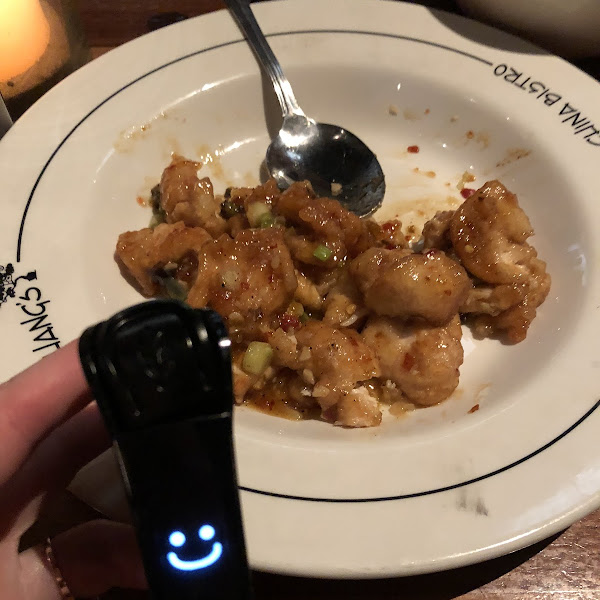 The waiter charged me the dinner price even tho I ordered lunch off the gf menu. When I showed him the error he said there was no gf lunch and acted annoyed. He then went away corrected the check but acted annoyed /angry.

Still recovering from lunch on Tuesday. Was either GF Lettuce Wraps or GF Chang’s Spicy Chicken that was definitely NOT GF! Eat at your own peril here... I’m done with this place.

This place is the best!! i am very picking when getting food and this is one of my favorite restaurants to go to.

Staff was friendly, knowledgeable, and accommodating. And the food is delicious! I will definitely go back.

Celiac for 18 years so I Nima test everything with my Nima device. I tested the Chang’s Spicy chicken and street noodles and both were gluten free. Very helpful with celiacs and the dishes make everything clearly gluten free.

Unfortunately tonight was the second time recently that I ate here off the gluten free menu and got sick. This time it was before my friend was even done eating her meal. I don't think I will be going back anytime soon. It is too bad because the food tasted so good.

It is AWESOME. My son loves all of their options and is very comfortable ordering here.

We have eaten here twice with no issues. My daughter's meal comes out on a different type of plate to differentiate it. Also, she is sensitive to cross-contamination and has not had any issues. Waiters and hostesses knowledgeable and friendly about celiac. (One host even has celiac)A+

Shrimp with lobster sauce is my safe option. I ordered it & had no problem with gluten

My nephew and I ate here today to celebrate his great report card. We ordered everything off the GF menu and double checked as each plate was served. Unfortunately, we both got sick right after leaving the restaurant. Ugh. We're disappointed as this restaurant had been a safe place for us before.

This is the best autism food celiac friendly. I have been to many PF Chang's in 4other states .Best desirous GF menu . Waiter pointed. out each Plate is marked with gluten free on dish . GF Beer Titos

yes they have a gf section on their menu so 2 stars for that but out of 5 times eating there and ordering the same gf Cantonese Lemon Chicken I think 1 time it didn't feel like I was ripping apart dried out and hard crusted pieces of chicken. I had to leave half the crust on the plate because I couldn't chew it. The lettuce wraps are generally good though I didn't order that tonight. I sent food back for being so died out in the past but we have so little choice in the area for gf Chinese food ave I was starving. I hoped for the best and was so disappointed again.

This was my second time to a PF Changs and the first since having to be GF. Was there with some people from work and I informed the waitress that I needed to be GF and she was more than helpful and friendly. I think her name was Linda, she was one of the most helpful and attentive servers I've had, I feel bad for not knowing her name. She explained that all of the GF food will come out on a special plate with the PF Chang logo on it and if it isn't on said plate, it isn't safe to for me. She suggested we try the GF lettuce wraps for the table and I believe everyone enjoyed them. I thought they were tasty, very similar to what my wife makes at home. I got to see the special plate which just has a line around the rim and the PF Changs name on it, but she pointed out to look for it. My mongolian beef arrived in the same special plate and I noticed the rest of the table had plain white plates. I felt special with my fancy plate and knowing that I could be sure it was GF. The food was much better than the first time I had PF Changs and with the special GF plate, decent GF selection and very understanding staff, I will surely return.

My favorite place to go for gluten free food. Amazing options with whole page of gluten free options on their main menu. Always get the spicy chicken, gf egg drop soup, and the flourless chocolate cake for desert. All great options.

Good option. They seem to take the GF thing pretty seriously. Food is tasty if a bit salty.

Very good options. Get the lettuce wraps! So good.

I am gluten free vegetarian so my options are limited here. I was disappointed in my dish it was not flavored well I got a rice a vegetable dish but everything was just steamed and not seasoned. I'm glad they are safe with their cooking techniques but gluten free can taste good and still be healthy.

P.F. Chang's has an excellent selection to choose from. They even dedicated a whole page for these options on their regular menu! The lettuce wraps are really good and I love the fact that they bring out the food on different plates.

It is amazing, I haven't been to a restaurant with this many gluten free options. It felt great to have a choice of what to eat

Love the fact that gluten free dishes come out on a distinctive plate so that you know they are gluten free.great good to boot!

Food was delicious! I had the ginger chicken with Broccoli and fried rice. I was even given gluten free soy sauce to top it. They are very accommodating. Several gluten free options on the menu. Very filling!

We came here for my daughter’s confirmation on Sunday. I had a reservation and arrived 5 minutes before. We waited over 35 minutes to be seated (this was at 4 pm and the restaurant was only 1/4 occupied). I spoke to the server and explained that I have a severe gluten allergy (celiac disease but use the term allergy since servers understand the term). She walked me through my order. I got the egg drop soup and Mongolian beef. I decided to test my soup and entree and both tested positive for gluten. They were apologetic and took them off the tab. Unfortunately I’ll never feel confident enough to come back.

I’ve been glutened by another location of this chain, but here I was assured a VERY gluten free experience by our server at lunch on a weekday. My meal was fresh, hot and delicious and as promised, gluten free. I am a highly sensitive celiac and this place delivers! Server was friendly and not at all offended by my questions about the kitchen as it had failed me at a previous location. Absolutely would eat here again without question.

Very amazing food and very confident in gluten free precautions. Not many options though.

Every time I have eaten here I have gotten very sick. I get much more sick here eating from their gluten free menu than I do from eating at non-gf restaurants.